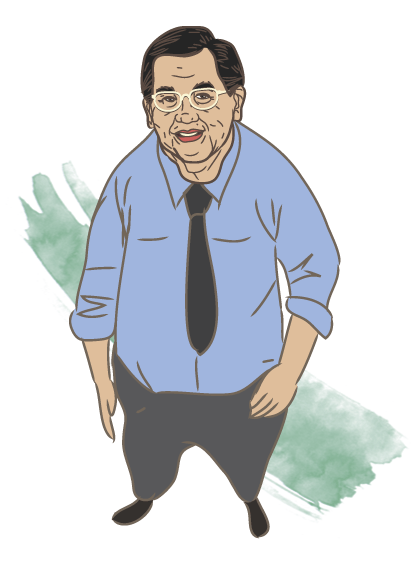 MANILA, Philippines – Despite numerous political affiliations, Osmeña takes pride in his independence. But by his own admission, the former Aquino campaign manager sides with the administration on its belief that Corona is partial toward former President Gloria Macapagal-Arroyo.

He added, “You cannot win if it’s a political trial. All the stink will come out. Whether true or not, a girl can come forward and say, ‘You raped me.'”

Osmeña also said party lines will not matter in the impeachment trial. With the mix of parties in the Senate, he said it will be difficult to get the numbers to convict Corona. He told the Philippine Star, “Nobody will be able to get the two-thirds vote. Only Manny Pacquiao can get that two-thirds vote.”

Yet he added, “Even if [Corona] wins with the other side not getting a two-thirds [vote], he is damaged. How can he continue to serve as Chief Justice?”

Education: Osmeña does not have a college degree but studied in schools like Harvard University, Georgetown University and the University of the Philippines. He is a farmer and businessman by training. He finished his high school from Beaumont College in England.

Osmeña’s brother, Tomas, is representative of the second district of Cebu. Rep. Osmeña is a friend of former President Arroyo. He did not sign the impeachment complaint against Chief Justice Renato Corona.

During martial law, Osmeña was imprisoned for 5 years. Along with fellow detainee Eugenio “Geny” Lopez Jr, he escaped from a maximum security jail in Fort Bonifacio.

Osmeña has been independent at the Senate, even grilling Aquino appointees at the Commission on Appointments. Still, some observers think the senator may side with the LP bloc consisting of Senators Franklin Drilon, Francis Pangilinan, Ralph Recto and Teofisto Guingona III.

Osmeña was among the senator-judges who voted to open the controversial second envelope allegedly containing incriminating evidence against Estrada. They were overruled, though, in an 11-10 vote. This led to a walkout of prosecutors and the People Power uprising that toppled Estrada.

In December 2011, he told ABS-CBN News, “Remember, in the impeachment trial of Joseph Estrada, we lost the vote but it was the public who said he was guilty.”

Position published or aired on Corona or on topics related to the Articles of Impeachment:

Even before Corona’s impeachment, Osmeña defended President Aquino’s criticism of the Supreme Court. While not mentioning Corona, the senator told ABS-CBN News that most justices in the High Court are openly partisan toward Arroyo.

He said, “You cannot continue tolerating a court until they’re 70 and they’ve been appointed by Gloria. They have been so partial to Gloria that who’s going to stand up for the Filipino people?”

Osmeña said he supports the Aquino administration’s “overall goal to throw out crooks and corrupt people in government.”

He told the Inquirer, “Gloria Arroyo really abused her power. So, to cover up for all her corruption, she set up a lot of land mines. She put Merceditas Gutierrez in the Office of the Ombudsman, and Renato Corona and some funny guys in the Supreme Court. All of them.” –Rappler.com