P70M given in benefits, pensions to SAF 44 families 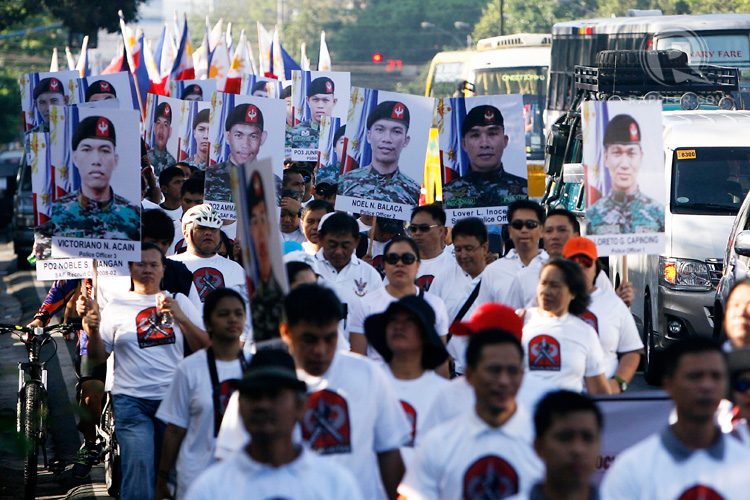 In a statement, the PNP said based on records from the Directorate for Personnel and Records Management, P69,566,524.88 have been released to families of the SAF 44 as of January 16, 2016.

“All amount legally due has been given to the beneficiaries. However, common law spouses are not eligible to receive these mandatory benefits,” the PNP noted.

Most, if not all of those slain during the operation were breadwinners of their immediate and extended families.

The announcement of the benefits released to the families thus far comes a week before the one-year mark of “Oplan Exodus,” a PNP SAF operation that targeted terrorists wanted by both the Philippines and United States.

While the SAF troopers were able to kill one of their targets, Malaysian bomb maker Zulkifli bin Hir (alias Marwan), it came at a high price.

According to the PNP, roughly P1 million is released monthly to families of the PNP SAF to cover pension benefits under the PNP and the Napolcom.

Monthly pensions form the PNP range from P8,467 to P20,522.15, depending on the rank of the SAF troopers. Those killed in action were junior officers and non-commissioned officers, with ranks ranging from Senior Inspector to Police Officers 1 (PO1) at the time of their deaths.

The Napolcom pensions, however, can only be given to surviving spouses and children of married SAF troopers. Parents of troopers who were single are not eligible for the pension, which is 60 months worth of 80% of the salaries of the next highest rank.

Promotions were awarded to the 44 posthumously.

On January 27, 2016, or days after the one-year mark of the clash, the Senate is set to re-open its probe into the controversial operation amid claims by Senator Juan Ponce Enrile of new evidence that would prove that President Benigno Aquino III lacked in his response to the crisis.

The Palace defended Aquino on Tuesday in a separate briefing, saying the President had done what he could “as President and commander-in-chief.”

“Meron siyang mga ginawa, meron ding ginawa ang mga kinauukulang opisyal ng pamahalaa at lahat naman ng mga ito ay naibunyag at naisiwalat na ‘nung mga nakaraang pagkakataon. Marami na ring pagsisisyasat na isinagawa hinggil diyan (The President did something and so did other concerned officials and this has been revealed in the past. A lot of investigations have been held on the clash),” presidential spokesperson Secretary Herminio Coloma Jr. said.

Still, Coloma said the Palace remains open to talking about and explaining the circumstances of Mamasapano.

Two of the SAF 44 are also set to receive the Medal of Valor, the highest military award in the Philippines. The Napolcom has already given the go-signal for Chief Inspector Gednat Tabdi and Police Officer 2 Romeo Cempron to receive the award posthumously, pending Aquino’s approval.

Tadbi, commander of the 84th Special Action Company (SAC), the main striking force of the operation, is said to have led his company mates in their attempt to reach the 55th SAC, who were trapped in the fields of barangay Tukanalipao.

Cempron, meanwhile, helped the lone survivor of the 55th SAC escape the firefight.

The rest of the 42 will be receiving the Medalya ng Kabayanihan (PNP Distinguished Conduct Medal).

The 30 survivors, meanwhile, were given the option of special promotions and the Medalya ng Kabayanihan. Another SAF trooper, Superintendent Raymund Train, was also awarded the same medal. The 15 wounded during the operation were meanwhile given the Medalya ng Sugatang Magiting (PNP Wounded Personnel Medal).

Forty-six children of the 28 SAF troopers will be getting scholarship grants from kindergarten to college. While 44 scholarship certificates were given out to each of the SAF 44 families to cover education at the Asian Institute of Maritime Studies Scholarship.

Housing grants were also given through the National Housing Authority, with 32 units completed and 24 still being constructed.

SAF families also received over P26.875 million from the Senate, the House of Representatives, the local government of Dasmariñas City, and the PNP Special Assistance Fund – these funds covered both the SAF 44 and survivors of the operation.

The PNP noted that donations were also made directly to the families and are therefore not part of official records.

Other benefits received by the families include funeral benefits from the Government Service Insurance System (GSIS), insurance and health care plans from the San Miguel Foundation, and P10,000 each for each family from the Justice Department’s Board of Claims. – Rappler.com