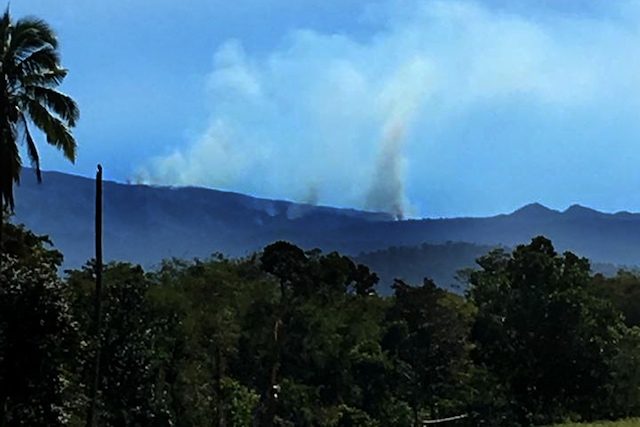 CAGAYAN DE ORO CITY, Philippines – Lanao del Sur officials are investigating the cause of the fire that razed the mountain forests of Butig town in the province on Thursday night, January 21, including concerns that it might have been triggered by volcanic activity.

Heavy smoke enveloped the area near the town as well as Alamada in Wao town as of posting, but Vice Governor Haroun Alrashid A. Lucman Jr of the Autonomous Region in Muslim Mindanao (ARMM) said that the fire was declared under control past noontime on Friday, January 22.

Jennie Tamano, Lanao del Sur provincial Information officer, said the area affected by the fire is estimated at around two square kilometers. But this could be larger after authorities conduct a formal investigation.

Pacasum said the area cannot be penetrated by vehicles because of its high elevation, and can only be reached through a 5-hour walk through thick forests.

The area where the forest fire started has an active volcano, Mount Makaturing, leading some to speculate a connection.

Concern that the fire might be volcano-related was fanned by observations by some people in the area that the blaze seemed “lava-like,” as it glowed from the distance throughout Thursday night and into the wee hours of the morning.

Tamano said the local government is investigating if there is any connection between the volcano and the forest fire.

“There is still no confirmation about this side of the story though. The PDRRMO team is still verifying this speculation,” she said.

The Philippine Institute of Volcanology and Seismology (Phivolcs) has not reported any activity of Mount Makaturing, which last erupted in 1882.

Officials also speculated that the fire could have been caused by a hunter.

Tamano also said that Lucman was scheduled to conduct an aerial survey of the extent of the fire that day.

Pips Naga of the Lanao del Sur Provincial Environment and Natural Resources said that the direction of the fire was from Butig, heading towards Lumbayabao town.

Tamano said Lanao del Sur Governor Mamintal “Bombit” Alonto Adiong Jr has directed the  Butig officials to report details of the fire to the PDRRMO through the municipal disaster risk reduction and management office or Alert.

“Should there be casualties, PDRRMO must extend the necessary assistance,” she said.

Adiong also directed the PDRRMO to head to the site and check for damages, casualties, and to investigate the cause of the fire. – Rappler.com