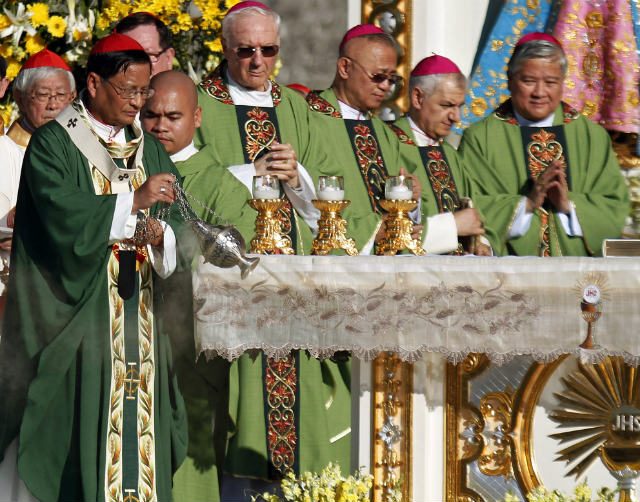 CEBU CITY, Philippines – Masses in the Philippines should adapt to Filipino culture to address concerns that this form of worship, the most important for Catholics, has become “boring.”

Church leaders in the Philippines have, in fact, suggested to the Vatican injecting Filipino practices in the Mass. One of these is letting the massgoers or “children” receive communion first, before the priest or “elder” does, a priest said.

The term for their proposal is “inculturation.” A Vatican document defines inculturation as an effort “to make the message of Christ penetrate a given sociocultural milieu” – in other words to adapt to certain cultures.

“The liturgies that are not inculturated, they get lost,” Archbishop Piero Marini said on Monday.

Marini is one of the best persons to talk about this. For 20 years, as Master of Pontifical Liturgical Celebrations, he led Vatican officials in organizing Masses by the Pope.

‘Return to this enthusiasm’

“To participate in the liturgy is to adapt the liturgy in particular circumstances,” Marini said through an interpreter.

Marini explained that “the liturgy which we received…originated in the 5th century,” from “an inculturated context.”

He pointed out several adaptations of the liturgy – for instance, the Byzantine rite in Greece, Alexandrian rite in Egypt and Ethiopia, and the Roman Catholic rite used in the Philippines and most other countries.

He said these various liturgies “come out from a particular cultural context.”

Marini said the Philippines has made a proposal for the inculturation of the liturgy, but the process “is kind of slow in progress.”

An inculturated liturgy had earlier been approved for India, he said.

“We’re asking to inculturate, to put in Filipino traits within the Mass, without destroying the essential parts of the Mass,” said Father Leonido Dolor, media director of the Archdiocese of Lipa, in an interview with Rappler.

Dolor referred to the proposed “Misa ng Sambayanang Pilipino” (Mass of the Filipino People), which he said is “still in limbo” at the Vatican.

In the “Misa ng Sambayanang Pilipino,” local church leaders want to incorporate “a lot of traditional Filipino customs in worship.”

One of the Filipino customs in their proposal is, during communion, “like Filipinos do, the elders would feed their sons and daughters first before they take their own food.”

“For instance, the priest, the presider, would be the last to take the body and blood of Christ; the people first. The lay would be the first to receive communion,” he said.

Dolor explained it “is a Filipino thing” when the padre de familia (head of the family) would feed his children first before he eats.

‘What is really boring?’

Bishop Mylo Hubert Vergara, for his part, said it is important for the Catholic Church “to address the issue” of the Mass being considered as boring.

“What is really boring? Is it the place? Is it the rubrics, the routine of the Mass? It may be the homilies, or are the people around boring? So basically this demands a lot of soul-searching,” Vergara told Rappler.

On inculturation, Vergara said: “When you look at a particular locality, you have the liturgy, what can we interject as the culture, the way of life, in our worship? But, however, there are certain guidelines given by the church in terms of the liturgy, and we have to respect that.”

Father Neil Tenefrancia meanwhile said the “Misa ng Sambayanang Pilipino” should be subject to “the fermentation of time.”

Tenefrancia said “the genius of the Roman rite,” after all, is that it is “tested by time.”

“Something that is not inculturated – or in other words, imbibed by the living body or organism or community – will eventually die or lose its value,” Tenefrancia, chancellor of the Diocese of Borongan, said in an interview with Rappler.

He said: “How will the Mass be preserved for the future? We will find ways to make people value it, through music, through adaptations, but balance the adaptations, by preserving the tension between tradition and ingenuity.”

“Anyway,” Tenefrancia said, “we believe that love is creative.” – Rappler.com