The 82-year-old monarch and his wife, Empress Michiko, bowed twice while laying white bouquets at a table in front of the grey marble shrine, located in the lake town of Caliraya about 3 hours’ drive from Manila.

In a half-hour event aired live in Japan by public broadcaster NHK, the imperial couple spoke and shook hands with former Japanese soldiers as well as relatives of their comrades killed in the Philippines.

“You have survived difficult times,” Michiko said to one of the the soldiers in attendance.

Akihito, meanwhile, told another: “Take care of yourself, stay well.”

The royals are winding up a five-day visit to the Philippines to celebrate 60 years of diplomatic ties as well as to honor those who died during the Japanese occupation.

Akihito has made honoring Japanese and non-Japanese who died in World War II a touchstone of his near three-decade reign – known as Heisei, or “achieving peace” – and now in its twilight. 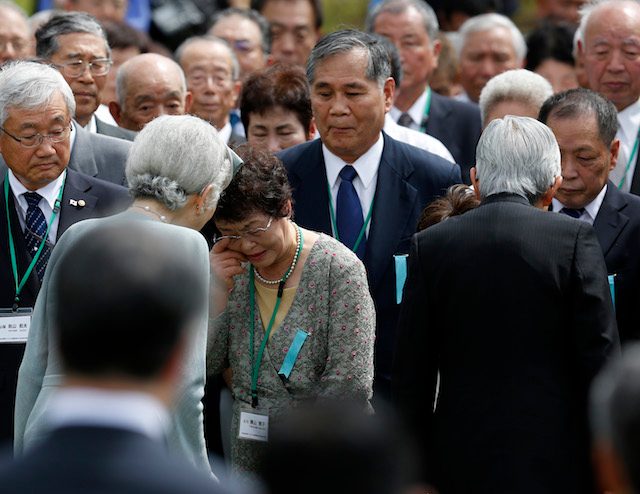 He has previously journeyed to other Pacific battle sites where Japanese troops and civilians made desperate last stands in the name of his father Hirohito.

On Wednesday, January 27 he bowed his head in sorrow during a somber ceremony at the Philippines’ biggest war cemetery in Manila, vowing later never to forget the many Filipinos killed during the occupation.

Tens of thousands of Philippine and allied US troops died marching to Japanese concentration camps or in confinement during Japan’s World War II occupation.

An estimated 100,000 Filipinos also died during the month-long campaign to liberate Manila in 1945, which saw aerial bombings and artillery flatten the city.

Akihito’s visit is the first by a Japanese emperor to the Philippines and comes as the two countries strengthen economic and defense ties, partly to counter China’s increasingly assertive actions in disputed regional waters.

Japan’s perceived failure to properly atone for its wartime actions has been a constant source of friction with China and South Korea.

But the Philippines has been much more accepting, partly because Japan has given billions of dollars in aid.

President Benigno Aquino gave Akihito a red-carpet welcome and hosted a banquet at the presidential palace for him on Wednesday.

“The state visit of their Imperial Majesties… serves to strengthen the friendship between the Filipino and Japanese peoples as both nations mark the completion of six decades of harmonious relationship,” presidential spokesman Herminio Coloma said Friday.

But the visit has been marked by small protests by women forced to serve as sex slaves for Japanese occupation troops who are demanding a belated apology and compensation.

“The emperor’s visit to the shrine is improper. Their soldiers committed many crimes in our country,” Isabelita Vinuya, 84, told Agence France-Presse as she and nine other ex-sex slaves held candles outside the Japanese embassy in Manila on Friday. – Rappler.com