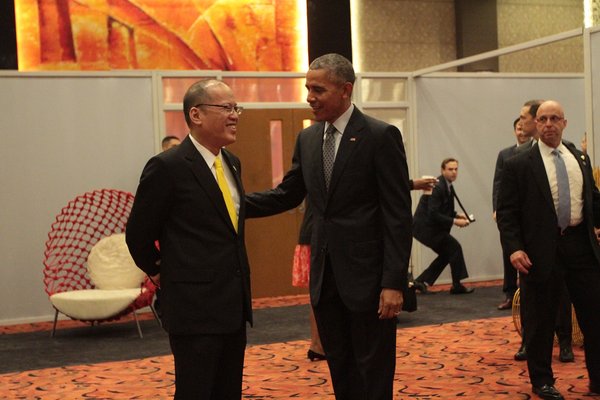 MANILA, Philippines (UPDATED) – President Benigno Aquino III is expected to raise the South China Sea dispute when he attends the Association of Southeast Asian Nations (ASEAN)-US Leaders Summit in California on February 15 to 16.

Sources from the foreign affairs department said the President is expected to bring up the topic during the two-day meeting at Sunnylands in Rancho Mirage, California, which will be attended by US President Barack Obama.

The leaders are expected to discuss economic and security issues, including the sea row wherein 4 of the 6 claimant are ASEAN members – the Philippines, Brunei, Malaysia, and Vietnam.

Asked whether Aquino will take up the South China Sea row at the Sunnylands meeting, Palace Communications Secretary Herminio Coloma Jr said in a text message to Rappler, “Based on what was taken up in the ASEAN summit in Malaysia last November, it is likely that President Obama will engage the ASEAN leaders in dialogue on issues of maritime security.” (READ: Obama deepens ASEAN-US ties as sea row escalates)

“President Aquino has always represented the Philippines’ position on the importance of ensuring freedom of navigation and overflight, as well as adherence to UNCLOS and international laws. He has also been a leading advocate for a legally binding Code of Conduct in the South China Sea,” Coloma added.

In a news briefing in Malacañang on Thursday, February 11, Assistant Secretary Maria Hellen Barber-Dela Vega said the ASEAN-US summit will mark the first meeting of the ASEAN member-states and the US as “strategic partners.”

“The summit aims to explore how ASEAN and the US, after elevating their relations to strategic partnership level, can work more effectively together; and especially now with the establishment of the ASEAN community,” Dela Vega said.

She said the leaders are expected to discuss the ASEAN economic integration in the context of the regional bloc’s strategic partnership with the US, as well as political and security issues, among others.

Dela Vega said since the meeting will have a “retreat” format, the leaders would be free to initiate discussions on any issue.

“We are looking at maritime security, transnational challenges and issues like countering violent extremism. It’s going to be a more informal, less structured atmosphere. So we expect leaders to be free, to raise any issues that might be of interest to them,” Dela Vega said.

Asked how maritime security issues will be discussed in view of recent developments in the South China Sea, Dela Vega said: “I think that it is natural to expect that maritime security will be [an] important issue…during the summit. To what extent and how it will evolve, the expectation is that it will be less-structured so any leader may be free to initiate a discussion on this.”

Aside from US President Barack Obama and the ASEAN leaders, the meeting will also be attended by ASEAN Secretary-General Le Luong Minh.

At the 27th ASEAN summit in Kuala Lumpur in November 2015, Aquino urged fellow ASEAN leaders to stand against China’s aggression in the South China Sea. (READ: Aquino to ASEAN: Stop China’s use of force)

After the summit, Aquino will go to Los Angeles to address the prestigious Los Angeles World Affairs Council (LAWAC) at the Intercontinental Hotel on February 16.

In its website, LAWAC said Aquino will discuss with its members and guests “the growing tension between the Philippines and China over sovereignty issues in the South China Sea.” (READ: Philippines: China to build ‘Berlin Wall of the Sea’)

“He will also talk about the new defense agreement between Manila and Washington, security in East Asia, and the future for economic growth in the Philippines and its neighbors in South East Asia,” it said.

The President is also expected to discuss the outcome of the ASEAN-US summit at the LAWAC dinner. LAWAC has hosted 8 US presidents and more than 250 heads of government and state, who delivered speeches over dinner and participated in question-and-answer sessions.

Aquino will also meet with executives of at least 3 major LA-based companies, and the Filipino community in Los Angeles, said Dela Vega.

Before he heads back to Manila, Aquino will receive an honorary degree from the Loyola Marymount University. – Rappler.com