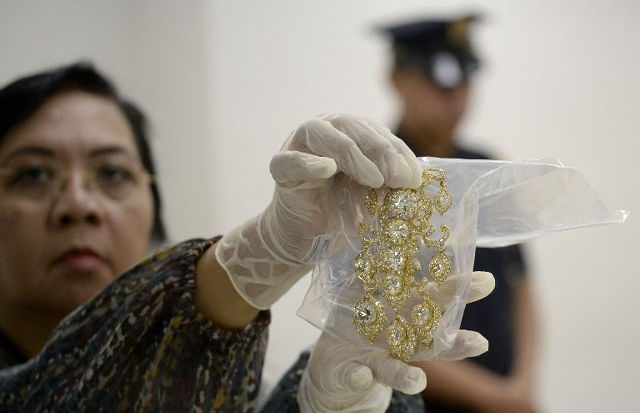 MANILA, Philippines – A government body has approved the sale of a jewelry collection seized from former president Ferdinand Marcos and his wife Imelda when they fled the country after his ouster through a People Power uprising 3 decades ago.

The Privatization Council okayed this week the proposed sale of the Marcos Jewelry Hawaii collection in the international market, the Presidential Commission on Good Government (PCGG) announced in a press release on Friday, February 12. The Department of Finance heads the said inter-agency council.

The Hawaii collection was seized from the Marcoses by the US Bureau of Customs upon their arrival in Hawaii in February 1986 shortly after the conclusion of the People Power Revolt.

“We hope that the Filipino people will finally benefit from the proceeds of the collection. The jewelry confiscated from the Marcoses remain a singular manifestation of the misguided priorities of the Marcos presidency during his reign,” said PCGG Chairman Richard Amurao.

This set of jewelry and two more Marcos jewelry collections now amount to a conservative estimate of at least P1 billion ($21 million), said the PCGG, following an appraisal done in November 2015.

The appraisal was performed by auction houses Christie’s and Sotheby’s, which reported that the total estimated values of thousands of jewelry pieces in the collections have significantly increased, with some items now estimated to be worth 10 times more compared to previous appraisals.

Further gemological testing would be conducted on significant items for a more accurate estimate, the PCGG added.

The PCGG plans to exhibit part of the collection before the international auction. Amurao said the agency has long been wanting to exhibit the jewelries “to inform the Filipino people of the excesses of the Marcos dictatorship.”

“The collection is a critical part of the past. We believe that the exhibit of these ill-gotten jewels will be a great vehicle to raise awareness, especially for the younger generation and those who have forgotten, to remind the Filipino people of the perils of the two-decade regime of corruption that was under the Marcoses,” added Amurao.

All Marcos jewelries are currently stored in a highly-secured vault at the Bangko Sentral ng Pilipinas. These include diamond-studded tiaras and necklaces, high-end wristwatches, and a rare 25-carat pink diamond jewel.

The Office of the President has custody of the Malacañang collection, abandoned when the Marcoses fled the presidential palace.

The Bureau of Customs, meanwhile, has custody of the Roumeliotes collection, intercepted at what was then the Manila International Airport during an attempt to smuggle it out of the country.

The 3rd collection was named after Greek national Demetriou Roumeliotes, who is said to have links to Imelda Marcos.

The PCGG also announced that it is set to launch a website to crowdsource tips to find more than 100 missing artworks purchased during the Marcos regime. (RELATED: Marcos central bank governor to testify on ill-gotten paintings)

Through MissingArt.ph, the PCGG hopes to know the whereabouts of extremely valuable paintings by Vincent Van Gogh, Picasso, Pierre Bonnard, and Michelangelo, among other artists.

The PCGG reported that in 2015, it has remitted a total of P14.02 billion ($295 million) to the Bureau of Treasury. This includes remittances of the rental and sale of various properties, as well as cash remittances and proceeds from dividends and recovered funds.

With this remittance, the PCGG said it had already exceeded its Major Final Output (MFO) target in 2015 by over 3,000%, putting it on track to be named as the “best agency” for the 4th straight year, for turning in the best performance against budget among the attached agencies of the Department of Justice.

Part of these remitted funds had been set aside to fund the Comprehensive Agrarian Reform Program (CARP) as well as the Human Rights Victims Reparation program for victims of human rights violations during the Marcos dictatorship.

The PCGG was created by former president Corazon Aquino via Executive Order No. 1 on February 28, 1986. It was tasked to go after the ill-gotten wealth of the Marcoses, his relatives and his cronies during his two-decade administration.