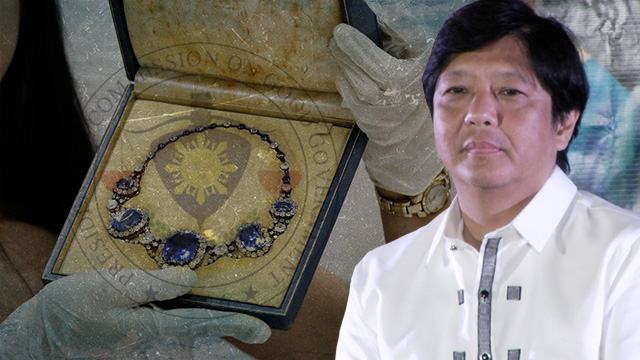 (It’s curious that, now that I’m a candidate, that it’s the campaign period, the PCGG is moving. I think politicking is involved here.)

On Monday, February 15, the PCGG said it was preparing to auction off the jewelry sequestered from the Marcos family and which were believed to cost at least $21 million or more than P900 million.

Commissioner Andrew de Castro earlier said that they hope to finish the auction before President Benigno Aquino III steps down from office in June.

“Regardless of who is in power after June 2016, it is our duty to dispose of the jewelry as soon as possible,” he said.

The commission – created by President Corazon Aquino in 1986 to recover the alleged ill-gotten wealth of the Marcos family and their cronies – also recently launched a website that would help trace the Marcos-owned art pieces of masters, such as Michaelangelo, Vincent Van Gogh, and Pablo Picasso.

(What are they looking for? Didn’t they searched my house already? Our house? I really don’t know.)

There are fears that the PCGG’s operations will be impeded should Marcos win as vice president – something not unlikely since the latest survey shows he is now tied with erstwhile front runner Senator Francis Escudero for the top spot.

(Why are we going to stop them? No one can really stop them. If it’s a court order, everybody has to follow.) – Rappler.com