‘Welcome home, my soldiers’: The AFP 30 years after EDSA

Feb 24, 2016 3:00 PM PHT
Facebook Twitter Copy URL
Copied
What was the military like after the 1986 EDSA People Power Revolution? A military that had trouble growing up. 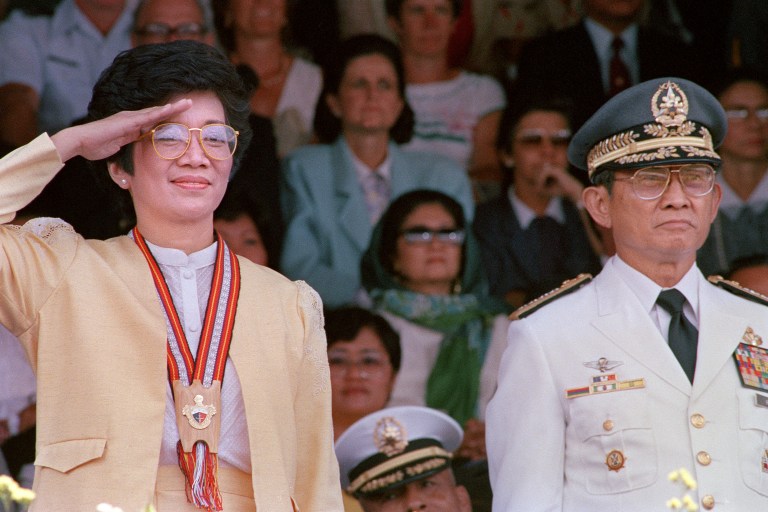 MANILA, Philippines – “Once more you are back where you have longed to be: on the side of the people.”

The sun shone brightest in the field of Fort del Pilar in Baguio City on March 22, 1986, when the first female commander-in-chief of the Philippine armed forces spoke before the first military graduates after the EDSA People Power Revolution.

“You leave this academy to play your part as officers in helping our nation back onto its feet after years of shameful prostration,” President Corazon Aquino told the 1986 graduating class of the Philippine Military Academy (PMA).

An Army colonel who belonged to PMA Class 86 recalled that occasion 30 years later: “We felt like we were on top of the world, feeling guwapo dahil high na high ang Pilipino.” (We felt like we were the best-looking guys around because Filipinos were euphoric.)

Little did Cory Aquino know that it would take more years for Filipino soldiers to finally come home. They mounted at least 6 coups against her, including the one in December 1989 that forced her to seek the US military’s help  – through a flyby of two F-5 fighter jets – just to keep her administration alive.

Ramon Yogyog was one of the young lieutenants who mutinied against Mrs Aquino in the 1989 coup. He graduated in 1985, and was battling communist guerrillas in the hinterlands of Davao when the 1986 EDSA People Power Revolution broke out.

He, like most lieutenants during those 4 heady days of the revolution, was clueless about what was happening at EDSA.

“I was doing patrol in the hinterlands of Maco (in Compostela Valley). We were waiting for a vehicle to fetch us, but it didn’t arrive. We had to walk 20 kilometers back to the camp,” Yogyog, now a brigadier general and deputy chief of the AFP Special Operations Command (Socom), told Rappler in a February 18, 2016 interview.

It was SOP for patrolling soldiers to use a counter-sign in the field to distinguish them from the enemy. Yogyog said it so happened that on that day, the counter-sign used on their guns was yellow.

When he and his men arrived in Tagum City using the yellow counter-sign, people on the streets began cheering them on and clapping. “They all thought we were on the Cory side. But we were just doing our job doing the patrol. We could see people clapping, so we ended up raising our firearms and shouting ‘hurrah’… enjoying the euphoria.”

Amid the cheers, Yogyog’s troops had a basic concern: “Sir, paano ito? Nag-collapse na ang gobyerno sa Manila? Saan tayo ngayon susweldo para pakainin ang ating pamilya?” (What will happen now, sir? The government in Manila collapsed? Where will we get our pay?)

Yogyog countered in jest: “Don’t you want that, we’d have two governments paying for us!”

Much has been said about the military that revolted 30 years ago against Ferdinand Marcos, the dictator who used and spoiled this institution to perpetuate himself in power under a martial law regime.

But what about the military that operated under a new world, where civilian leaders reigned, elected politicians screened officers’ promotion, human rights abuses were reported, and military transactions were scrutinized?

It was a military that had trouble growing up.

More than a year after Mrs Aquino was swept to power, the very same officers who plotted against Marcos attacked Malacañang in a bloody attempt to bring her down and set up a civilian-military leadership council.

Angered by what they described as “communist infiltration” in government, her “weakness” as commander-in-chief, and the military’s diminished power, then Lt Col Gregorio “Gringo” Honasan recruited troops for the August 1987 coup that burned down the military headquarters in Camp Aguinaldo and wounded Aquino’s only son, now President Benigno Aquino III. 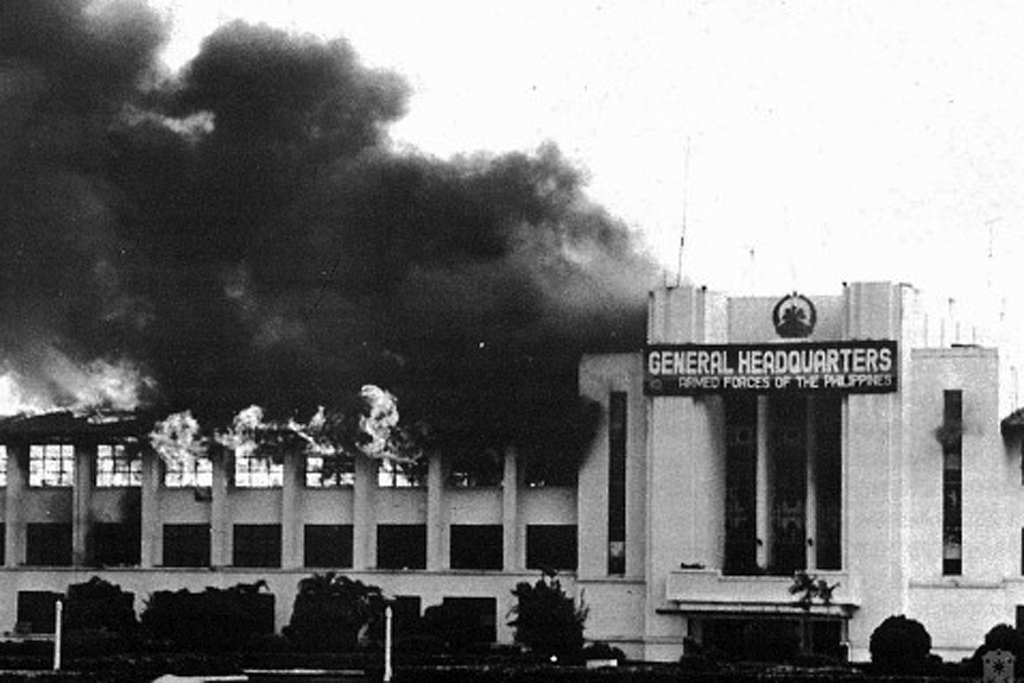 Many other mutinies were launched throughout the 6-year term of Cory Aquino, including the December 1989 coup that came close to toppling her.

Those coup attempts served personal and political interests, said Brig Gen Edgardo Davalan, PMA classmate of Yogyog who now heads the Ranger Regiment, where bulk of the coup forces had come from.

Coups belong to the past, he asserted.

The coup attempts were all crushed by the officers and soldiers who stood by her, led by her loyal defense chief, retired Constabulary general Fidel V. Ramos.

Thus by 1992, when Cory Aquino was to step down from the presidency, she looked for no one else to endorse to be her successor: the man who wanted to seize power not through the barrel of the gun but through the ballot – Ramos.

After getting elected as president, the cigar-chomping general succeeded in signing a peace pact with the mutinous faction of the military and rewarded them with reinstatement and appointments to civilian bureaucracy. He also deployed officers to civilian posts.

No coup attempt was ever launched during this period, but it was under his leadership that he made the military ascendant in the civilian bureaucracy.

Ramos appointed at least 100 retired and active-duty military officers to government positions and board seats of government-owned corporations, based on our own research. Of these officers, one of them, Renato de Villa, would run for president against Ramos’ favored candidate, Speaker Jose de Venecia Jr. Both men lost to the popular actor, Joseph Estrada.

Shortly after getting elected in 1998, Estrada unwittingly revived the rebellious streak of the armed forces. Despite catering to the soldiers’ war instincts in Mindanao – crushing the headquarters of the Moro Islamic Liberation Front at Camp Abubakar through sheer military might – Estrada eventually lost control of his troops as he lost credibility in the face of charges of corruption and high living.

In January 2001, bowing to public pressure, then Armed Forces chief of staff General Angelo Reyes led the military in withdrawing its support from Estrada, triggering the 2nd civilian-backed military revolt against a Philippine president in 15 years.

When the military again brokered a leadership transition from Estrada to Gloria Macapagal-Arroyo, the latter did not hesitate to reward the organization by appointing key officers to her new government. Arroyo named at least 51 retired and active-duty military officers to various posts in government, led by Ramos himself whom Arroyo named as special envoy abroad, according to our own research. 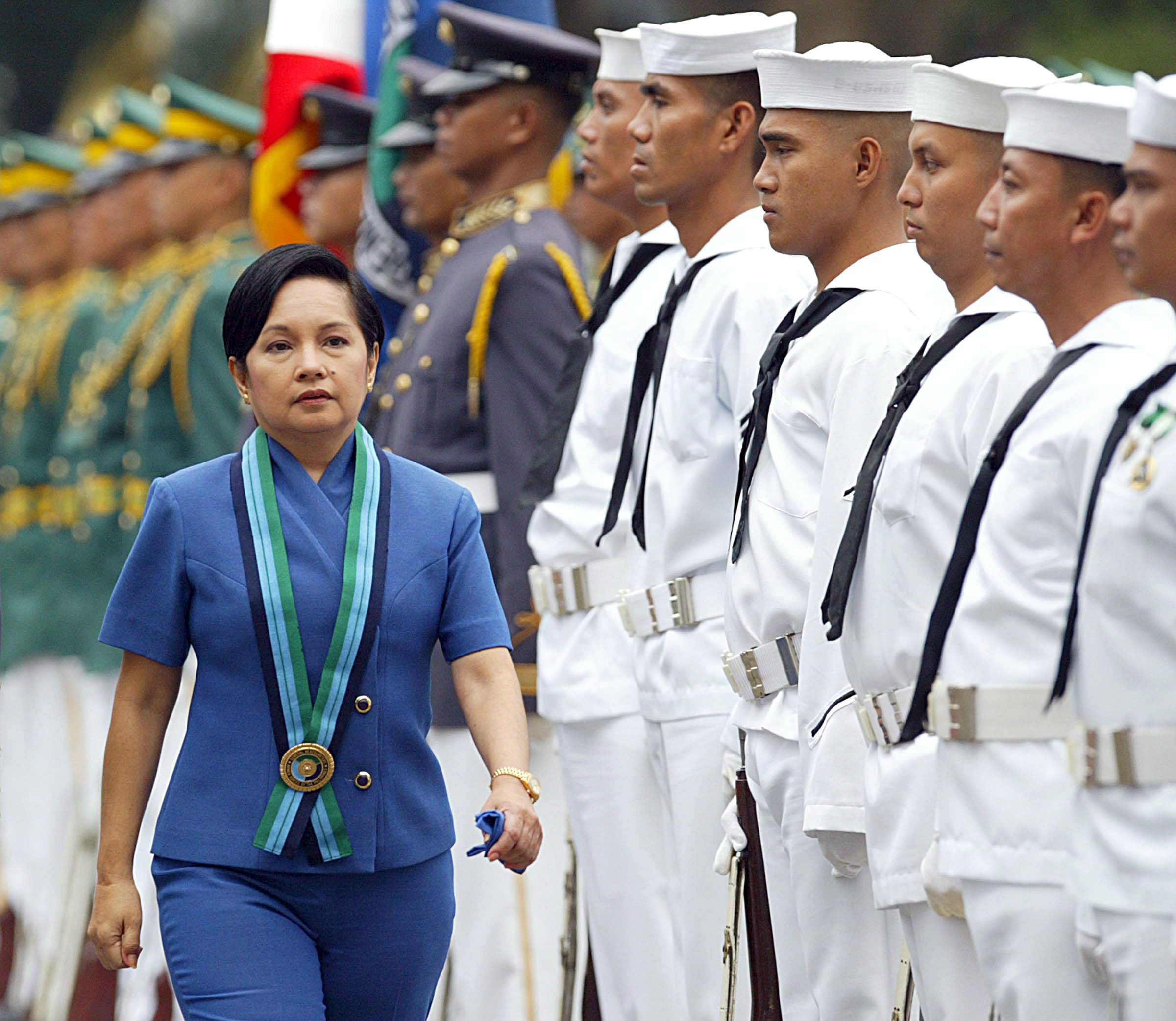 Arroyo took a step further by calling on the AFP to be at the forefront of her campaign to weed out poverty and take a more active role in governance.

Along the way, the military once again reared its ugly head. Its generals and officers were linked to election cheating when Arroyo ran for president in 2004, causing agitated soldiers to mount two botched mutinies against her.

Arroyo’s military also had to confront the biggest corruption scandal ever to hit the institution, post-Marcos: the arrest in 2003 at a US airport of the two sons of a military comptroller, who tried to smuggle into the US at least $100,000 – in cold cash.

Military comptroller Brig Gen Carlos Garcia, incidentally a PMA classmate of Honasan, gave face to the massive and systemic corruption in the military, which has been going on for decades through a process called conversion.

Because of delays in the release of government funds, the military resorted to shortcuts in funding their operations. They issued fake receipts to fake suppliers, who gave them cash in exchange for a fat interest. But many officers used the so-called converted funds to build houses and properties, and live luxurious lifestyles.

Garcia was jailed, the comptrollership office was abolished, and the military once again vowed to reform itself. One general who was dragged into the scandal simply gave up. General Reyes, who led the military revolt against Estrada, killed himself at the grave of his mother.

Today, President Aquino is about to end his term with the good thought that no faction has ever tried to seize power from him.

Davalan said the military is now faced with new challenges – terrorism and external threats. It’s “useless” to be mounting coups nowadays, he said. “Life is better now. The international community looks down on coups, and more people are now aware of the democratization process.”

Aquino’s level of comfort with the military is palpable. He’s given them equipment that his predecessors failed to do.

In fact, this February, the 30th anniversary of the EDSA revolution, he promoted colonels to one-star rank, including Yogyog, who joined the bloodiest coup attempt against his mother.

The soldiers have finally come home, however imperfect that home is. – Rappler.com