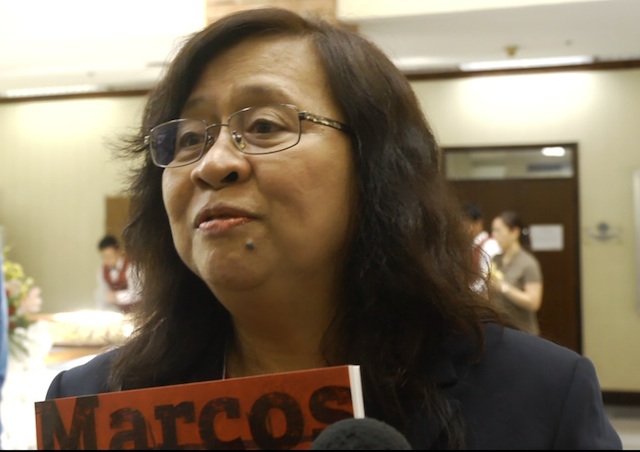 MANILA, Philippines – Thirty years since the historic uprising that overthrew the late dictator Ferdinand Marcos, a new book aims to recount the atrocities of the Marcos regime and bring to light stories of torture and repression.

In “Marcos Martial Law: Never Again,” journalist Raissa Robles presents a brief history of the human rights violations committed during the late strongman’s authoritarian rule. In her book, Robles provides not just stories of torture, but explains how and why Marcos declared martial law.

During the book launch on Tuesday, February 23, Robles said the book aims to remind Filipinos of the atrocities that other generations have already forgotten, and to uncover more stories of cruelty.

Robles recalled the story of one young woman, who had been raped and treated as a “comfort woman” by a military officer.

“We never knew the extent of the repression. There were times when I was doing the research here that I cried, because I could not imagine so much cruelty done by one Filipino to a fellow Filipino,” she said.

Describing it as a “study of a benevolent dictatorship,” Robles said the book also aims to serve as a “warning” about the costs of giving up one’s freedom.

In her preface, Robles wrote: “There seems to exist a yearning among many Filipinos for a strongman rule. This is a study of a strongman rule we once had, to serve as a warning that giving up our freedoms in exchange for the honeyed promises of a dictator will exact a terrible price on everyone, including the unborn generations.”

The launch of the book comes two days before the Philippines marks the 30th anniversary of the historic EDSA People Power Revolution that ended the Marcos dictatorship.

It also comes ahead of the national elections in May, where the late dictator’s son, Senator Ferdinand “Bongbong” Marcos Jr, is running for vice president.

Based on a recent Social Weather Stations survey, Marcos has promising survey numbers. He is currently tied with Senator Francis Escudero for the top spot in the vice presidential race.

Of the 52 million registered voters for the May polls, around 20 million come from the youth sector – a generation that has not seen or experienced the horrors of martial law.

During the book launch, Robles dismissed suggestions that the timing of the book’s release had a political motive.

“The timing was accidental. I should’ve released it much earlier, when I realized the memory was fading,” she said.

Asked by broadcast journalist Karen Davila if the book was a bid to make Marcos lose in the May polls, Robles answered: “I don’t know, because you can’t predict what would happen because of a book.”

Robles, however, said the Marcoses should acknowledge the atrocities that occurred during the late dictator’s rule.

In previous interviews, the younger Marcos had repeatedly said that he saw no reason to apologize for his father’s two-decade presidency. The lawmaker also cited his father’s achievements during that time. (READ: Bongbong Marcos: Aquino must move on)

But Robles criticized Marcos for having a “selective memory,” choosing to leave out any mention of repression and torture under the late dictator’s rule.

She added that the younger Marcos himself should not be let off the hook, in response to some critics who say that he should not be made to pay for his father’s sins.

“Let me put that into context. Bongbong Marcos was governor in 1985. The Commission on Human Rights gave me data on extra-judicial killings in different provinces. In the province of Ilocos Norte, there were only 2 extra-judicial killings: one in ’85, one in ’86, and who was the governor? He was. The governor’s in charge of peace and order. So did he not know?” Robles said.

Asked what it means for the Philippines to have a Marcos back in national office, Robles replied: “He is not the past, but he will be your horrible future.”

While she did not speculate on the book’s impact on the upcoming polls, Robles said she hopes that the book will help young voters understand the historical context of grievances against Marcos, and to elect leaders whom they believe will work for the good of the country.

“I don’t want voters to think, ‘I won’t vote for him because he’s a Marcos.’ He (the voter) has to understand. I will vote for this person because he will be a good leader,” she said. (READ: Too late for martial law victims’ campaign vs Bongbong Marcos?)

Robles added that the book aims to warn people about the price of a potential new dictatorship.

“When [leaders] promise, ‘Give me power, and I will do this for you in 6 months’ time,’ you better stop and pause. Because once you give a person power, it’s not as easy to get it back,” she said.

“If a person says that he wants a benevolent dictatorship, I want that person to read this book and decide for himself or herself. Is it worth the price, is it worth the cost in human lives, in suffering?” – Rappler.com