Feb 27, 2016 9:27 PM PHT
Rappler.com
Facebook Twitter Copy URL
Copied
While the proposed BBL was not passed in the 16th Congress, the Third Party Monitoring Team of the Bangsamoro peace process says there has been progress in efforts to achieve peace in Mindanao 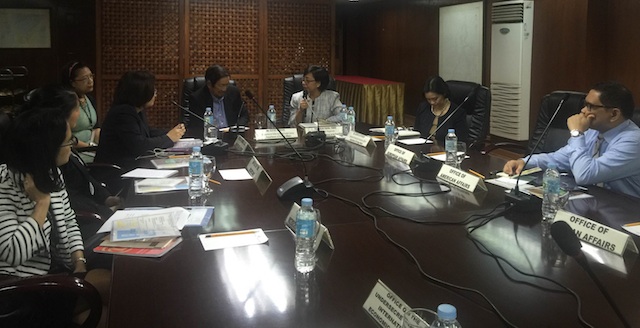 MANILA, Philippines – Despite Congress’ failure to pass the proposed Bangsamoro Basic Law (BBL), the Third Party Monitoring Team (TPMT) of the Bangsamoro peace process said that transitional justice and reconciliation will play a key role in sustaining peace efforts in the troubled southern region of the Philippines.

A botched police operation in January 2015, the Mamasapano clash, sparked public outrage and prompted some lawmakers to reconsider their support for the proposed measure. (READ: Blame absentee, indifferent lawmakers for failed BBL)

But TPMT chair Alistair MacDonald said on Saturday, February 27, that there has been “significant progress” in the peace process despite the non-passage of the BBL.

He cited the first stage of the decomissioning of rebel firearms last June 2015, and the recently finished report of the Transitional Justice and Reconciliation Commission (TJRC), the body which recommends measures to correct historical injustices against the Bangsamoro people.

“Transitional justice and reconciliation is an important part of the CAB. The anger and hatred borne of the Mamasapano incident played into the deep-rooted prejudices among the peoples of the Philippines. It is therefore imperative that this be carried forward as a national effort,” MacDonald said.

The TJRC report was the product of various consultations done nationwide. MacDonald said it would be key to help end prejudice against Muslims and end the long-running armed conflict in Mindanao. (READ: Mindanao in transition: How to deal with the past?)

“Looking forward, it will be essential to build a path forward…so that the next administration can hit the ground running, to work to sustain public confidence in the process during this period of uncertainty, and to reaffirm the commitment of all stakeholders to winning the prize of peace,” he added.

Meanwhile, Foreign Affairs Undersecretary Rafael Seguis said the support of the international community will help sustain momentum in pushing for the peace process.

Malaysia is the a third-party facilitator in the peace negotiations that culminated in the CAB in 2014. Other international bodies were also involved in monitoring and reviewing the implementation phases of the agreement.

The government’s chief negotiator Miriam Coronel-Ferrer also said that the Bangsamoro peace process and ceasefire mechanisms have now become a model to other countries “that are still trying to find a way out [of their internal armed conflicts].”

“We are now in the books of experience of peace negotiations. It is becoming one of the learning tools for other conflicts,” Ferrer said. – Rappler.com