Philippines: Does China think it’s above the law? 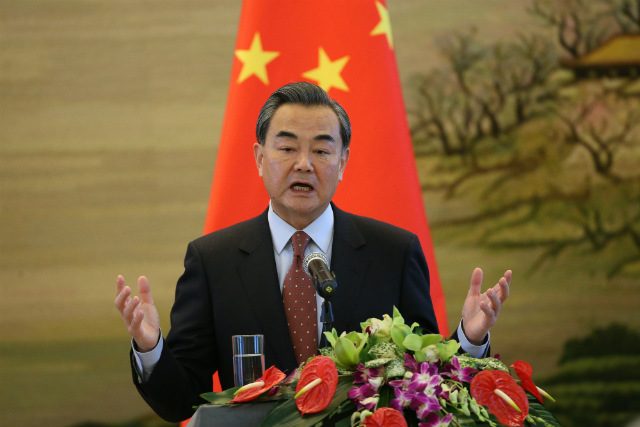 In a statement, Philippine Foreign Secretary Albert del Rosario pointed out that the international community, including the Philippines, is “asking China to respect” the upcoming ruling on the arbitration case lodged in The Hague. (READ: Philippines wins round 1 in historic case vs China)

He said the Philippines and other countries want to push for “an international rules-based regime.”

Del Rosario said, “If China does not heed our collective call, does it mean that China considers itself above the law?”

The Philippines’ top diplomat added, “We have had countless meetings with China to try to address the issue between the two of us to no avail. We have invited China many times to join us in arbitration as early as 2012, again to no avail.”

This comes after Wang on Thursday, February 25, criticized the Philippines’ case in a speech for the Washington-based think tank Center for Strategic and International Studies (CSIS).

Wang said: “Well, there is some commentary that China has not accepted the Philippines’ request for mandatory arbitration and therefore China does not abide by international law. But let me say to you, the truth is the opposite. China actually abides by international law when we reject the Philippines’ request for arbitration.”

Wang pointed out that under the United Nations Convention on the Law of the Sea (UNCLOS), China rejected mandatory arbitration for certain cases.

One of the excluded disputes involves overlapping sea boundaries.

The Philippines, however, asserts that its case against China is different.

In its case, the Philippines seeks to invalidate China’s 9-dash line, the demarcation used by Beijing to claim virtually the entire South China Sea. (READ: EXPLAINER: Philippines’ 5 arguments vs China)

The Philippines expects the arbitral tribunal at the Permanent Court of Arbitration in The Hague, Netherlands, to rule on the case early this year.

While the Philippines awaits this ruling, recent reports said China had deployed surface-to-air missiles, fighter jets, and radar installations in the region.

China on Thursday justified its defenses in the South China Sea as “absolutely necessary.” – with reports from Agence France-Presse/Rappler.com