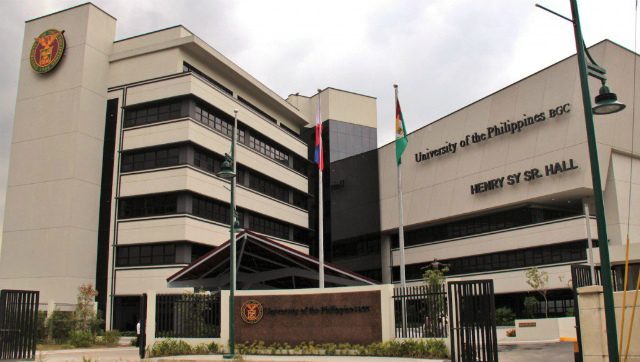 MANILA, Philippines (UPDATED) – The University of the Philippines (UP) will soon open the doors of its newest constituent unit in Bonifacio Global City (BGC) to professionals.

The 9-level building located in the financial district was turned over to UP on Tuesday, March 1, by donor SM Investments Corporation (SMIC).

Meanwhile, there are plans to transfer two existing sections of the part-time MBA of the Virata School of Business to UP BGC “also by the next academic year,” according to UP President Alfredo Pascual.

“The degree programs to be offered at the UP BGC are mainly professional masters – the types needed or sought by people working in BGC and surrounding areas. No undergraduate programs are planned at present,” Pascual told Rappler.

In a statement Tuesday, the university said that the professional school, with its total floor area of 12,000 square meters, has 29 classrooms, 3 computer laboratories, libraries, faculty lounges, an auditorium, a moot court, a multi-purpose hall, several discussion rooms, conference rooms, and office spaces.

“The UP BGC will bring UP’s brand of quality education to those working and living in the southern Metro Manila areas, including those living in the nearby cities and provinces, desiring to partake in the knowledge generated by the country’s leading educators, scientists, artists, and public intellectuals,” Pascual said in the statement.

With the newest constituent unit, UP now has a total of 17 campus locations nationwide. (READ: UP expands to Taguig with new building)

The building’s donor, SM, has been a “long-time partner of UP” in its nationwide college scholarship program under SM Foundation. The program provides free college education to thousands of scholars from financially-challenged families.

The new building in BGC is named after Henry Sy Sr, chairman and CEO of SMIC. – Rappler.com