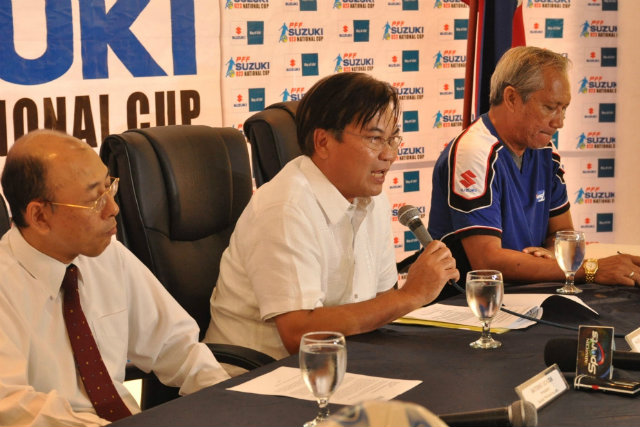 MANILA, Philippines – The Philippines’ dream of hosting the 2016 Suzuki Cup is still alive, according to PFF President Mariano “Nonong” Araneta.

Despite the ASEAN Football Federation’s announcement on their website that the Philippines has withdrawn as hosts of the biennial competition, the head of the Philippine Football NSA says there is still a chance that one round-robin group stage could be held on Philippine soil.

Araneta will attend the AFF Competition Committee meeting in Phnom Penh, Cambodia, on Monday to request that the country be allowed to host. According to the PFF’s own announcement, they were unable to obtain a contract from the management of the Philippine Sports Stadium on time, hence the difficulty in pinning down the hosting.

Should the Competition Committee decide that the Philippines could still host, then the matter will be elevated to the AFF Council meeting in in Danang, Vietnam, set to take place on March 12.

The draw for the AFF Suzuki Cup is slated for July, while the final group stage is scheduled to begin in November 19. Myanmar is already set to host one round-robin phase.

Araneta says that should we host, the bulk of the games would be in the Philippine Sports Stadium in Bulacan with one non-Azkals match likely in Rizal Memorial. In the Suzuki Cup, as in the World Cup, the final two matches of a 4-team group stage are played simultaneously in different venues.

He added that even if we do not get to host a group stage, we will be able to host semifinal and finals matches should we qualify. The Suzuki Cup semis and finals use a two-legged, aggregate-goals home-and-away format.

Araneta also shared his impression of the newly-elected president of FIFA, Gianni Infantino. Araneta and Infantino are acquainted through a pair of meetings they both attended recently. They were seated at the same table at the Asian Football Confederation annual awards night last November 27 in New Delhi, India, and were also both attendees at the AFC meeting in Kuala Lumpur last month to discuss the new reforms in FIFA. 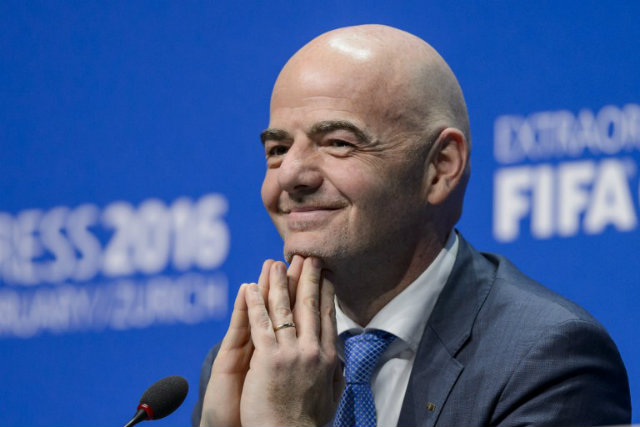 The PFF president said he was able to enjoy a steak dinner with Infantino and other football dignitaries in KL. Infantino was then the General Secretary of UEFA, the European football confederation.

Infantino, a Swiss national, has been well-known in football circles for many years and has given seminars in football administration. Araneta believes that the late former Ateneo football coach Chris Monfort has taken one.

The 45-year-old Infantino is described by Araneta as very approachable and humble. Infantino was part of the committee that instituted far-reaching reforms in the organization, such as the increase in size of the executive council to 36 members, with a minimum number of women in the posts. Infantino was recently lauded for organizing a friendly pick-up game with FIFA staff and other dignitaries on his first day at work. He also recently flew on a budget airline for a trip to the UK to signal a change in philosophy from FIFA’s scandal-ridden past.

Nonetheless, Araneta admits that he did not vote for Infantino but instead cast his vote for Sheikh Salman Bin Ibrahim Al-Khalifa, the Bahraini AFC president. Infantino won in the second round of voting, 115 over 88 for Salman. Araneta says that Salman had already instituted in the AFC many of the reforms that are now beginning in FIFA.

But Araneta is still excited about the Infantino regime, especially since it promises a windfall for member associations like the Philippines. Currently the PFF receives US $250,000 a year in assistance from FIFA. Infantino says he will up that to US$5 million over four years, or US$1.25 million a year, meaning Philippine football will have a total of US $1.5 million a year, 6 times its current stipend.

Araneta says that Infantino is confident that new sponsor money will flow into FIFA now that he has come to replace Sepp Blatter.

The PFF president says that the federation will look into increasing the number of football competitions at youth level and also for the women’s game.

“We can look at the gaps that we need to fill at the youth levels,” says Araneta. Off the top of his head he identified the U15 age group as one that needs more competitions. Araneta also indicated that he could be working with the DepEd to improve the football competition in the Palarong Pambansa, either at the national or regional level.

A U21 national men’s competition is being eyed this year, perhaps in conjunction with PFF’s partner in youth tournaments, Smart. This year Negros Occidental won the Smart-PFF U22 championship. They would likely be knocking back the age limit a year younger because the AFF has also decided that starting next year, the SEA Games mens football competition will be an under-22 event instead of under-23. Presumably that would mean the cut-off birth year for players will be 1995 instead of 1994. – Rappler.com