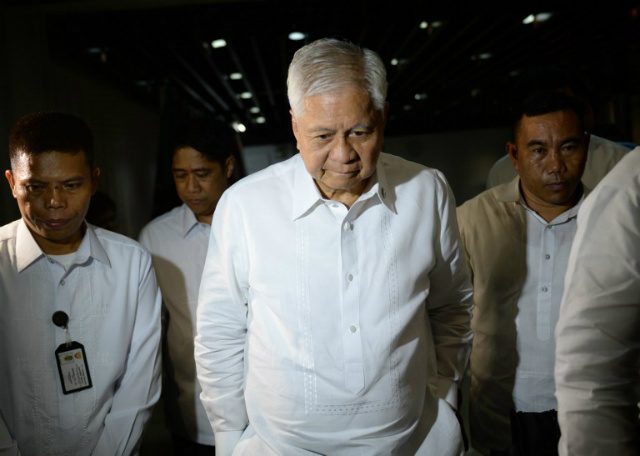 Facebook Twitter Copy URL
Copied
Albert del Rosario, 76, formally steps down as the Philippines' top diplomat after helping save thousands of OFWs and even bringing China to court

MANILA, Philippines – Only 36 hours after taking his oath as the Philippines’ top diplomat in February 2011, then Foreign Secretary Albert del Rosario flew to Tripoli, Libya, to help bring 400 Filipinos out of this danger zone.

Elmer Cato, charge d’affaires of the Philippine embassy in Iraq, said Del Rosario wanted “to lead the extraction of Filipinos from a country that was fast spiraling out of control.”

He compared the 76-year-old Del Rosario to Moses, the old biblical figure who led Israel in its exodus from oppressive Egypt.

“He would again be Moses in the years that followed, leading our people home from one hotspot to another,” Cato said in a public Facebook post on Sunday, March 6.

Del Rosario “would subsequently find himself in Syria, Egypt, Iraq, Tunisia, and Yemen to oversee our repatriation efforts or look into the condition of our overseas Filipino workers (OFWs),” the diplomat added.

Cato paid tribute to Del Rosario who, on Monday, March 7, formally stepped down as the Philippines’ 24th secretary of foreign affairs.

Del Rosario resigned from his post due to health reasons.

His body had been frail for the past few years, but this didn’t stop him from personally helping repatriate 24,000 Filipinos from strife-torn countries.

“The Secretary knew he would be placing himself in the line of fire whenever he headed out for a rescue mission abroad. But there was never any hesitation on his part,” Cato wrote.

“No one could stop him, not even the President, from doing what he thought would be best for our people. He needed to be there in the frontlines to assure our kababayans (countrymen) and their families back home that the Department could be counted upon to bring them out of the danger zone,” he said.

Cato added: “It was these acts of courage that moved a number of us in the career foreign service corps to volunteer to serve in hardship posts in the Middle East and Africa. We asked ourselves: If no less than the Secretary would risk his own life to serve our people, what should prevent us from doing the same?”

More recently, Del Rosario is remembered for helping delay the execution of Mary Jane Veloso, a Filipina drug trafficking convict who was set to be killed by firing squad in Indonesia in April 2015.

While working to secure a reprieve for her, Del Rosario even secretly visited Veloso to check her condition in her detention cell, former Rappler Jakarta bureau chief Jet Damazo-Santos wrote in May 2015.

In a separate interview, Del Rosario said Veloso requested him scholarships for her children. A well-known businessman before entering the government, Del Rosario donated his own money.

Del Rosario said in an interview quoted by Business Mirror, “I did not think I could get those funds anywhere from the government, so I committed a scholarship fund for her and that scholarship fund is now operational.”

On top of his work for OFWs, Del Rosario is also known as the diplomat under whose watch the Philippines filed a historic case against China over the West Philippine Sea (South China Sea).

Once, according to Reuters, he even departed “from the usual diplomatic niceties” after Chinese Foreign Minister Wang Yi reeled off “a list of complaints against Manila for stirring tensions over the South China Sea.”

“Del Rosario was not scheduled to speak, but after hearing Wang’s speech at Sunday’s closed-door meeting in the kingdom of Brunei, he raised his hand and proceeded to rebut China’s allegations one by one, according to Philippine diplomats. The Singapore foreign minister called it ‘testy exchanges,'” Reuters reported in July 2013.

Giving away his salary

While not dealing with diplomats, Del Rosario is also known for other acts of kindness in his own department.

For one, Del Rosario has reportedly waived his government salary for the past 5 years.

In 2015, he divided his whole year’s salary among the 1,620 members of the DFA’s staff, “from the undersecretaries down to the rank-and-file employees,” GMA News Online reported. Each of them got an extra P500 for Christmas.

“He’s the only secretary I know who has done such gesture,” Foreign Undersecretary Rafael Seguis said in another interview quoted by GMA News Online.

Cato on Sunday said he “wanted to fly to Manila to personally say goodbye” to Del Rosario, but he “was not able to.”

He would have wanted Del Rosario to hear stories of OFWs who profusely thank the Philippine embassy in Iraq.

Cato said: “The more than 2,000 Filipinos working in Baghdad, Basra, Kurdistan, and other parts of Iraq may not be aware of it, but the primary reason the Philippine Embassy (PE) remains open is because of the Secretary and his firm commitment to serve our people. It was he who declared that no matter how dangerous the situation is, Baghdad PE shall remain open as long as there are Filipinos here.”

“Our kababayans in Iraq should not be thanking us. They should be thanking Albert del Rosario.” – Rappler.com

Be part of the next generation of change. Click here to apply for jobs in the Government.