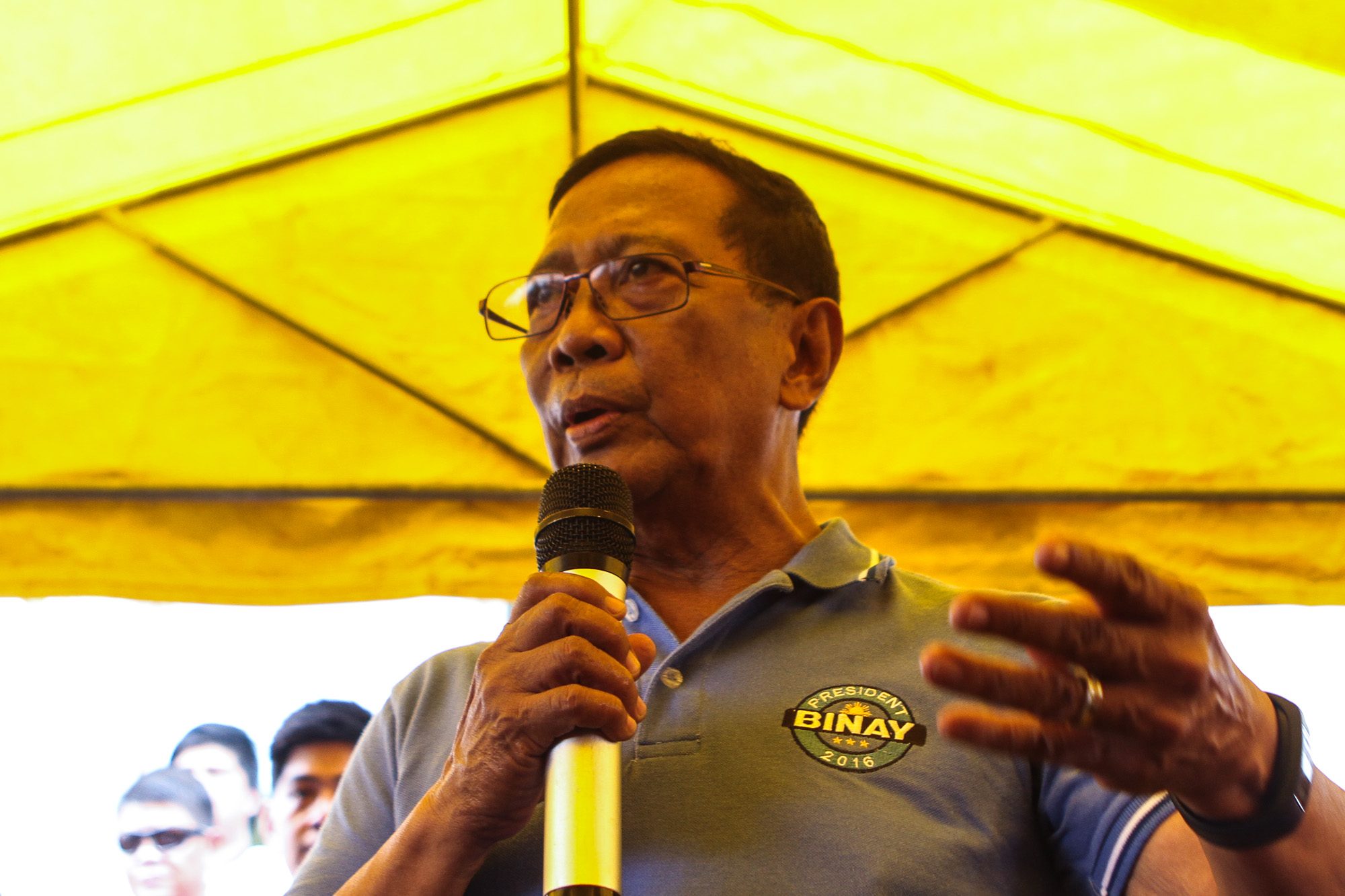 Facebook Twitter Copy URL
Copied
(UPDATED) UNA president Toby Tiangco says had the report been about the Aquino administration's PDAF or DAP, COA and the Ombudsman 'would have hesitated' to proceed with the special audit

“The commission could be held liable for violating COA Resolution No 2015-033 dated September 29, 2015, prohibiting the conduct of special audit against candidates of the 2016 elections,” said United Nationalist Alliance (UNA) president and Navotas Representative Toby Tiangco on Thursday, March 10.

Tiangco made the statement after the findings of a special 148-page COA audit report on the infrastructure project in Makati, where Binay was mayor for 21 years, was reported on.

In the report, the COA said Binay may be administratively and criminally liable for grave misconduct, dishonesty and gross inexcusable negligence, and graft and corrupt practices over the alleged overpricing of the Makati City Hall Parking Building II.

The 11-story, P2.8-billion project was initiated in 2007 during Binay’s last term as Makati mayor and was completed under the term of his son dismissed mayor Jejomar Erwin “Junjun” Binay Jr.

“This project has passed 11 regular audits. It is very clear that a special audit team was created for the ‘special’ purpose of being used as demolition team against VP Binay,” said Tiangco.

He earlier claimed that Ombudsman officials were pressuring COA to release the report, a charge which the Ombudsman has denied. (READ: Makati building probe: Binay denies pressuring Ombudsman)

Binay remains a strong contender in the presidential race. The latest ABS-CBN-commissioned national survey conducted by Pulse Asia from February 16-27 showed him and Senator Grace Poe statistically tied for top spot at 24% and 26%, respectively.

COA Resolution 2015-33 stops the commission from creating teams that will conduct fraud or special audits on candidates for the 2016 elections between October 12, 2015 to May 9, 2016.

The audit team was formed after Ombudsman Conchita Carpio Morales requested from then-COA chair Ma Gracia Pulido-Tan the conduct of a special audit on the construction of the parking building based on the complaint filed by Renato Bondal and Nicolas Enciso in July 2014.

The entrance conference for the special audit was done on December 2, 2014, way before the coverage of the COA resolution.

The special audit team then worked for a total period of 90 working days before conducting the exit conference for the audit process  on January 12, 2016.

While this date already falls within the scope of the COA resolution, the same document states “the conduct of initial assessment or evaluation of requests for fraud/special audits and such other preliminary procedures prior to the creation of fraud/special audit teams shall not be suspended.”

The Ombudsman had already filed charges of graft and falsification of documents against Junjun and his co-accused city hall executives before the Sandiganbayan. The anti-graft court recently released hold departure orders against them as well.

The Omdusman, however, is yet to file criminal charges against the Vice President. Some constitutionalists say that Binay does not enjoy immunity from suit because he does not have “multifarious duties and powers” like the president.

Meanwhile, election lawyer Romulo Macalintal said the Vice President is immune from criminal suit, but not from impeachment.

The camp of Binay has repeatedly accused the Ombudsman of exercising selective justice against Binay.

According to Tiangco, COA and the Ombudsman “would have hesitated” to proceed with the audit had the report been about the Priority Development Assistance Fund (PDAF) and the Disbursement Acceleration Program.

“The Ombudsman should explain why high ranking officials of Congress, who are members of the Liberal Party, named in the August 14, 2013 COA Special Audit Report on PDAF, have not yet been filed with plunder,” said Tiangco.

“This is a clear sign of selective justice on the part of the Ombudsman, who despite knowing that we are still permitted to file a motion for reconsideration, released an incomplete report to tarnish the name of the Binays. Knowing this Ombudsman, she will stop at nothing to ensure that a case is filed against the mayor, not even due process nor the rule of law,” he added.

Junjun also said the timing of the COA report’s release is “suspect”, especially when his father is set to attend the second presidential debate in Cebu on March 20.