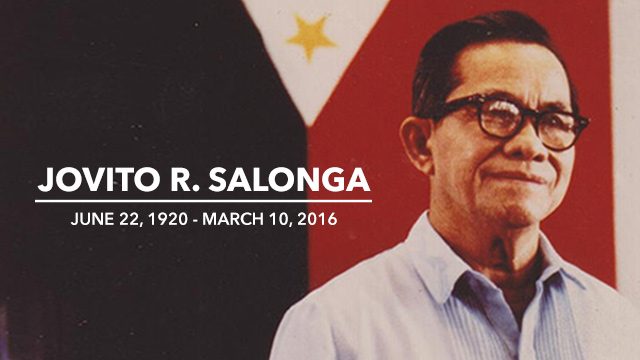 Facebook Twitter Copy URL
Copied
(UPDATED) For younger Filipinos who may not know him, Jovito Salonga was one of the country's most esteemed statesmen

For younger Filipinos who may not know him, Salonga was one of the country’s most esteemed statesmen.

Born in Pasig City on June 22, 1920, Salonga was the youngest among the 5 sons of pastor Esteban Salonga and vendor Bernardina Reyes.

He fought poverty and injustice, armed only with hard work and discipline. (READ: The life, love and struggles of Jovito Salonga)

Salonga pursued law at the University of the Philippines, but was interrupted by World War II: he was imprisoned for almost a year for participating in anti-Japanese activities. Upon his release in 1943, he resumed his law studies.

Salonga ventured into politics in 1961, when he was elected representative of Rizal province. He became senator in 1965, topping that year’s polls.

He was seriously injured in the Plaza Miranda bombing on August 21, 1971, which left him blind in one eye and deaf in one ear. This did not stop him from again topping the senatorial elections that year.

In 1980, during martial law, he was arrested for allegedly masterminding a series of bombings in Metro Manila. President Ferdinand Marcos ordered his release a month later, due to immense pressure from Salonga’s supporters and lack of concrete evidence against him.

After the 1986 EDSA People Power Revolution, President Corazon Aquino tapped Salonga to head the Presidential Commission on Good Government (PCGG), mainly tasked to go after the ill-gotten wealth of the Marcoses.

He became senator and topped the polls for the third time in 1987. Most notably, he and 11 other senators opposed the RP-US Bases Treaty, which aimed to extend the stay of US military bases in the country.

He ran for president in 1992, but placed only 6th in a 7-way race. He retired from politics that same year.

Outside politics, he continued his public service through Kilosbayan (People Action), an independent, ethics-oriented people’s organization; the Bantayog ng mga Bayani (Monument of Heroes) Foundation, organized to honor the nation’s martyrs during martial law; and the Bantay Katarungan (Sentinel of Justice), a watchdog that monitors the performance of courts and quasi-judicial agencies.

Malacañang mourned the passing of Salonga and extended its condolences to his family. Presidential Spokesman Edwin Lacierda said the elder statesman’s death “challenges all who would seek election to live up to a life well lived as a patriot and citizen.”

“With heads bowed in grief and respect, we extend our deepest sympathies to the family of Senator Jovito Salonga. His passing marks the departure from this life of another of those brave, committed individuals who lit a candle during the deep darkness of the dictatorship; and who contributed to the restoration of our democratic way of life after the triumph of People Power,” Lacierda said.

“His life stands as a reproach to all those who would put personal gain ahead of public service; who would lower the standards of public discourse; and who would sacrifice human rights and the rule of law either for personal or partisan advantage. He joins the ranks of those who have made the position of senator of the Republic an honorable, and respectable, thing,” he added.

Leaders of Congress and the judiciary, and others who had been inspired by Salonga’s brand of public service and love for country have also expressed their deep sorrow over his passing.  (READ: PH mourns death of ‘great Filipino’ Jovy Salonga) – Rappler.com