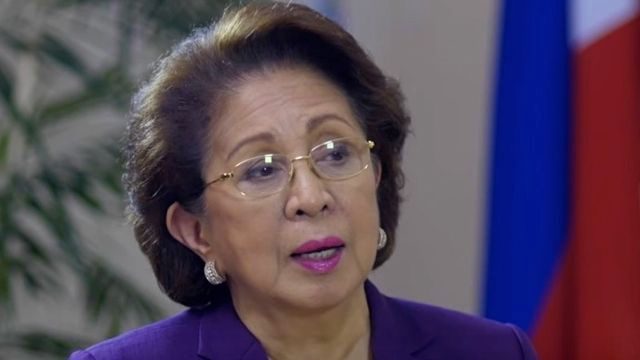 Facebook Twitter Copy URL
Copied
Ombudsman Conchita Carpio Morales says, 'It is doubly malicious to charge that a group was hired to demolish any candidate. In fact it is the candidate’s team that has been trying to demolish me.'

MANILA, Philippines – Ombudsman Conchita Carpio Morales has received a “threat to her person,” even as the Office of the Ombudsman (OMB) continues to await a copy of a full report from the Commission on Audit (COA).

On Friday, March 11, Morales said in a statement, “We have not, at this moment, received any report from the COA. It is malicious for anyone to attribute to me, or the Office…having distributed any report. It is doubly malicious to charge that a group was hired to demolish any candidate. In fact it is the candidate’s team that has been trying to demolish me.”

She was apparently alluding to the camp of Vice President Jejomar Binay, who, along with his son Jejomar Erwin Binay Jr, and several others, were named in a COA special audit report as having violated rules pertaining to procurement and the Anti-graft and Corrupt Practices Act. This was in relation to the P2.28-billion ($48.8 million) Makati City Hall Parking Building II project initiated in 2007, when Binay was on his last term as Makati mayor.

United Nationalist Alliance (UNA) president and Navotas Representative Toby Tiangco said on Thursday, March 10, that the 11-storey project had passed 11 regular audits. “It is very clear that a special audit team was created for the ‘special’ purpose of being used as a demolition team against VP Binay.” (READ: Who’s pressuring who on Makati building COA report?)

Morales did not disclose details about the nature of the threat, when exactly she received it, and how it was communicated to her.

She also said, “We are not deterred from discharging our legal duty by all this canard being peddled…nor the threats that have reached me.” Office of the Ombudsman insiders, however, said they are taking the necessary precautions.

Morales said she has no further comment on the COA report until her office receives a copy from the COA itself and until it is “rigorously studied to determine if it confirms the previous findings of the office.”

The COA’s 12-member special audit team found “irregularities from budgeting to procurement to execution resulting in misuse of public funds” in the 5-phased construction of the Makati building.

The team also found that the P11.97-million ($256,000) contract for architectural and engineering services with contractor MANA Architecture and Interior Design Co is not covered by an appropriation. It was awarded through “simulated bidding and payments” that were not supported with documents and required information.

The special audit was prompted by an August 26, 2014 letter of Morales to then COA Chairperson Ma. Gracia Pulido-Tan requesting for such investigation of the Makati Parking Building. This request was, in turn, based on a complaint filed by Renato Bondal and Nicolas Enciso VI on July 22, 2014.

COA office orders dated September 12, 2014 and January 29, 2015 were issued for the conduct of the special audit for a period of 90 days audit fieldwork. An “entrance conference” was conducted on December 2, 2014 and an “exit conference” was held on January 12, 2016 during which audit findings were discussed with Makati Mayor Romulo Peña.

In mid-January, COA advised the OMB that “the audit report is ready” and that a copy would be transmitted to the office by end of January. No such report came, the OMB said.

COA later said they would transmit a copy to the OMB on February 22 but again no report came. Instead COA gave another date, March 2.

The OMB subsequently learned that Binay had “pleaded with a COA official not to release the report until after the May elections.” This was denied by the Binay camp.

The OMB however countered, “If the VP claims the above is not true, he should say so under oath.”

Binay’s camp had also accused the Ombudsman of distributing copies of the COA report to select reporters, but this was refuted by the Ombudsman. “Impossible because we have not received a copy of the audit report from COA up to now.” – Rappler.com