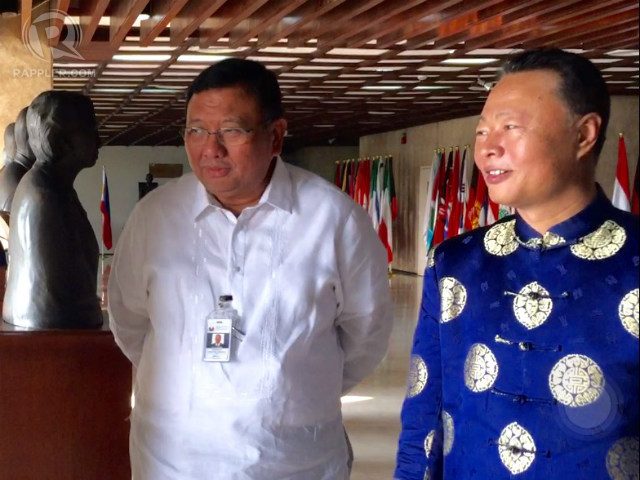 Zhao went to the Department of Foreign Affairs (DFA) on Monday afternoon, March 21, and was seen leaving the DFA around 4 pm.

Almendras escorted Zhao to the ambassador’s car after their meeting, then the DFA chief also left for another appointment.

Zhao was one of the first ambassadors Almendras has met since he began his 100-day stint as secretary of the Department of Foreign Affairs (DFA).

In an interview with reporters, Almendras said they did not tackle the West Philippine Sea (South China Sea) dispute during their meeting.

Their meeting comes after Chinese vessels reportedly drove away at least two Philippine boats in the disputed Panatag Shoal (Scarborough Shoal) in the West Philippine Sea, according to the Philippine Daily Inquirer.

In a news conference earlier on Monday, Almendras said he will not bring up the reported harassment of Filipino fishermen during his meeting with Zhao.

He said the DFA is still waiting for the Armed Forces of the Philippines (AFP) and the Department of National Defense (DND) to validate these reports.

“I cannot bring it up with the Chinese ambassador later because I do not have the verification from the DND whether it really did happen,” Almendras said during his first news conference as DFA chief on Monday.

He added: “I’m not saying that the fishermen are lying. It’s just that procedure and protocol require us to validate and really vet it before we start doing an immediate action.”

Almendras also said he didn’t know what topics Zhao will raise, as the Chinese ambassador “was the one who requested for the courtesy call.”

“I’ll interact with him in the best way I know, as he raises the issues,” he said.

Under the Aquino administration, Almendras first served as energy chief then as Cabinet Secretary.

Almendras, the President’s friend and Ateneo classmate, is part of the chief executive’s inner circle.

Asked about the most important thing he wants to do as DFA chief, Almendras said: “I’d like to think that there’s not one particular big thing that I would focus on. And unfortunately, I do not have that luxury.”

He said this question is hard to answer because it seems “there’s something important that comes up” every day since he assumed his post.

He then stressed the DFA’s objectives that include fostering good diplomacy and helping Filipinos overseas.

“They’re all equally important. I’m very afraid to say one is more important than the other,” Almendras said. – Rappler.com