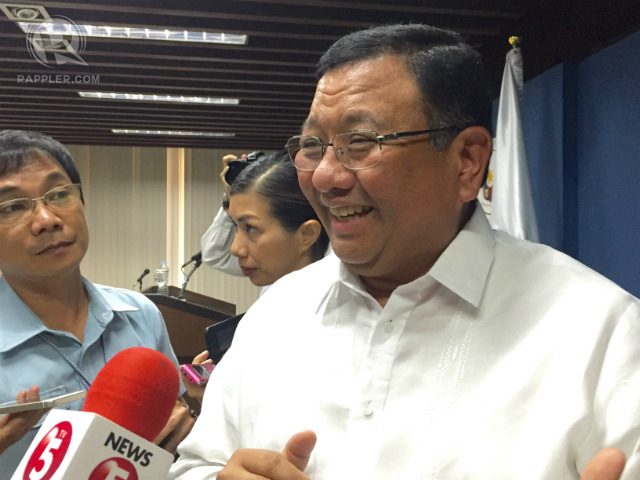 MANILA, Philippines – While he did not discuss the West Philippine Sea (South China Sea) with the Chinese envoy, at least the Philippines’ new top diplomat knows his table “is in the correct position.”

Almendras said he and Zhao did not discuss the dispute over the West Philippine Sea, the thorny topic that brought the ties between Manila and Beijing to its lowest point in history.

Despite China’s recently reported harassment of Filipino fishermen, Almendras said he “cannot bring it up with the Chinese ambassador” because the DFA is still verifying these reports with defense officials.

When their meeting ended past 4 pm on Monday, Almendras told reporters, “It was a very nice bilateral discussion of issues.”

Almendras said one topic they discussed was the Association of Southeast Asian Nations, but he refused to elaborate.

Of course, Almendras said, he also asked about feng shui, a Chinese system to ensure good luck through the positioning of structures and objects, among other things.

“My table is in the correct position,” Almendras said after consulting with Zhao.

Before their meeting on Monday, Almendras said he wanted to ask the Chinese ambassador a few tips about feng shui.

Almendras recalled the last time Zhao visited him in the Palace. The new DFA chief, the President’s friend and Ateneo classmate, used to be the energy chief then the Cabinet secretary under the Aquino administration.

Almendras told DFA reporters: “I’m so interested in having him over because the last time he visited me in the Palace, he rearranged my table for feng shui considerations. So I’m hoping that he can give me a few tips now that I’m here.”

The DFA chief later described Zhao as a friend.

“I’m really going to ask him about the position of my table,” Almendras stressed in an interview before meeting with Zhao.

“The only time I moved my table in the Palace was after he visited me. He said, ‘I cannot leave without telling you that this is the wrong place for your table.’” – Rappler.com