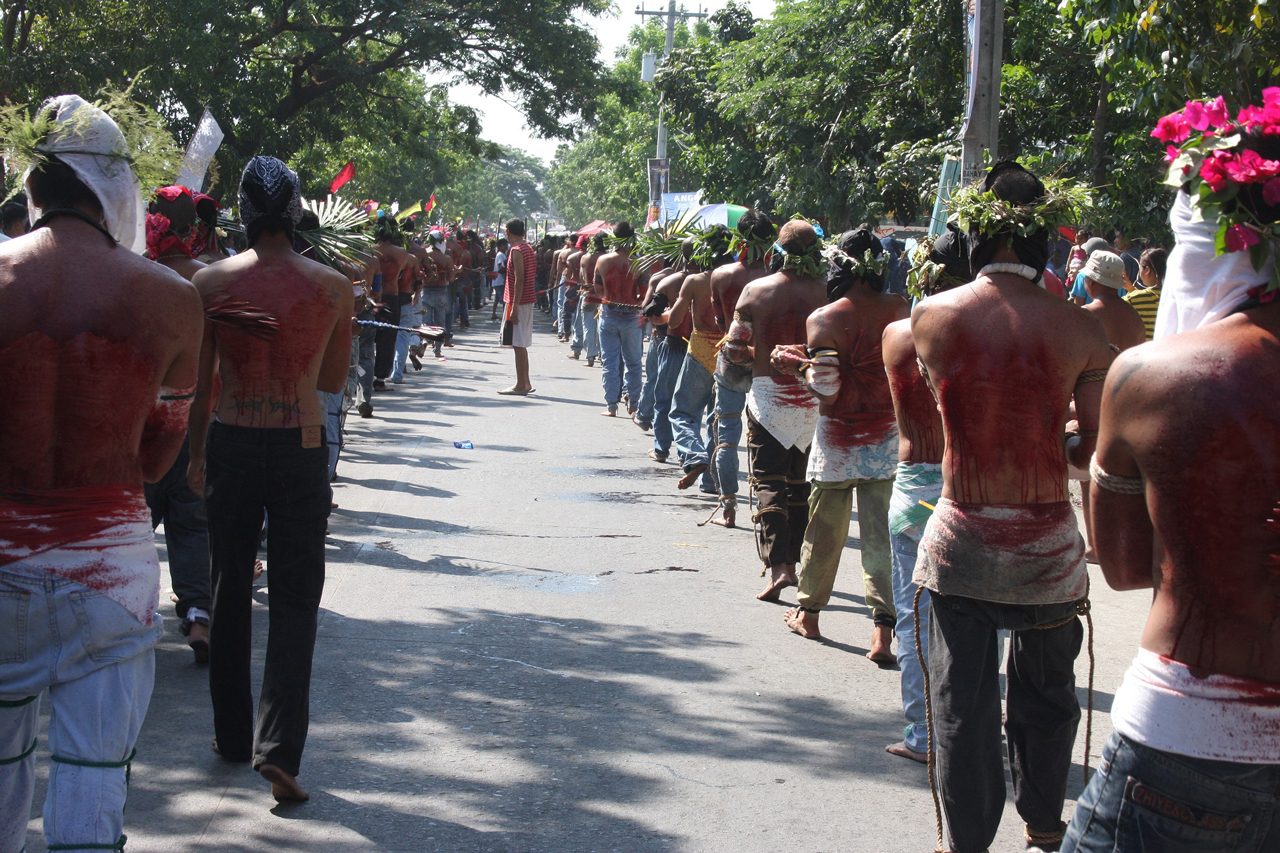 Facebook Twitter Copy URL
Copied
Despite discouragement from Church officials, the annual ritual has attracted so many local and foreign spectators that it has been included in the calendar of events of the city government and the regional tourism office

Upon hearing this, children and some adults would come out of their houses  to watch the slow march of men, sometimes with women, bearing heavy wooden crosses. They are usually followed by half-naked men who continually whip the self-inflicted wounds on their backs with bamboo sticks attached to a rope.

Unlike the common scene several decades ago, many of the hundreds of cross-bearers and flagellants all over this province no longer cover their faces with garments to hide their identities. Only a minority of them now walk barefoot on the rough dirt roads, blistering asphalt, and concrete pavements.

Cross-bearing and bloody flagellation are more prevalent in the 3 cities of Pampanga – San Fernando, Angeles, and Mabalacat – especially on Maundy Thursday and Holy Friday. People do it to atone for their sins, show gratitude to granted prayers, or parade their masculinity by showing off their strength and ability to withstand physical pain. Some do it supposedly just for “fun,” especially the younger ones.

Penitents go to every makeshift cenaculo (Passion Play) located in villages, and subdivisions of a town or city where some would lay face down on the ground to be beaten with banana stalks from the arms to the feet; others would kneel and pray while the passion and death of Jesus is chanted in the vernacular. Some go from one parish church or chapel to another to get down on their knees and pray in silence.

But the ultimate act of Lenten penitence is voluntary crucifixion, the kind that has been going on in the City of San Fernando, particularly in the villages of San Pedro Cutud, Sta Lucia, and San Juan where 10 men had themselves nailed to wooden crosses on Good Friday last year. (READ: Overview: Holy Week rituals in the Philippines) Artemio Añoza, a faith healer, introduced voluntary crucifixion as part of the Via Crucis (Way of the Cross) Lenten street play  in San Pedro Cutud in 1962. In Sta Lucia and San Juan, the actual nailing to the cross began only a few years ago.

From 1986 to 2001, smoked fish processor and vendor Chito Sangalang played the role of Kristo (Christ) in what many consider as a gruesome ritual at the makeshift Calvary in the middle of a rice field in San Pedro Cutud village. He was 42 when he completed his 15-year crucifixion vow as thanksgiving for the recovery of his mother from tuberculosis. He was accompanied by 13 other penitents on his last year.

In 2002, one of the other penitents, signage painter Ruben Enaje, took Sangalang’s place as the lead character in the Via Crucis. Both men started letting themselves nailed to the cross in 1986. (READ: The devotion of Ben Kristo) On Good Friday, Enaje, now 55, will again play the role of Kristo with about 10 other penitents. It will be his 30th year on the middle cross atop the man-made Golgotha in the two-hectare area specifically set aside for the annual event in San Pedro Cutud. And as in the past, both his hands and feet will be stabbed by sterilized 3-inch stainless steel nails.

Two to three penitents each in Sta Lucia and San Juan villages are expected to join the voluntary crucifixion.

Despite discouragement from the Archdiocese of San Fernando, the annual ritual has persisted. It has attracted so many local and foreign spectators that it is now included in the calendar of events of the city government and the  Department of Tourism office in Central Luzon.

Good Friday has also become the unofficial fiesta of San Pedro Cutud with households entertaining guests with food and drinks – including meat, which the Catholic Church prohibits during Good Friday. The official fiesta of the village falls on June 29, the feast of their patron saint, St Peter.

The world-famous Via Crucis is not only for locals. Some foreigners have been  drawn to it out of curiosity; some have even tried to participate, though not always out of devotion.

In 1995, a Belgian nun tried to join the penitents in the Via Crucis in San Pedro Cutud but the Belgian Embassy refused to give her clearance to be nailed to the cross.

In 1996, a Japanese man succeeded in becoming one of the crucified penitents after telling Via Crucis organizers that he wanted to ask God to cure his cancer-stricken younger brother in Japan. But it turned out that the crucifixion scene was just part of a film he and his companions were shooting at that time.

Some years back, a Scotsman backed out minutes before the ritual because he got scared of the nails. He was offered to be tied to the cross but he refused it, saying such it would be deceitful to do so  as it would not be a true sacrifice.

Last year, the city government announced that no foreigners would be allowed to join the ritual to keep it from becoming “a circus.” It cited the incident the in 2014 when a Dutchman backed out from voluntary crucifixion at the last minute.

Politicians, too, have been asked not to use the event as a platform to campaign. This is to prevent the experience in 2007, when politicial streamers became the backdrop to the nailed penitents. – Rappler.com