MANILA, Philippines – The prosecution panel has requested the impeachment court to subpoena the Supreme Court (SC) resident auditor, more court officials, and representatives of business establishments to testify on the reimbursements that Chief Justice Renato Corona sought for himself.

The prosecution’s 6-page request for a subpoena enumerated receipts suggesting that the Chief Justice charged to the Supreme Court his wedding gifts, barongs, and meals. 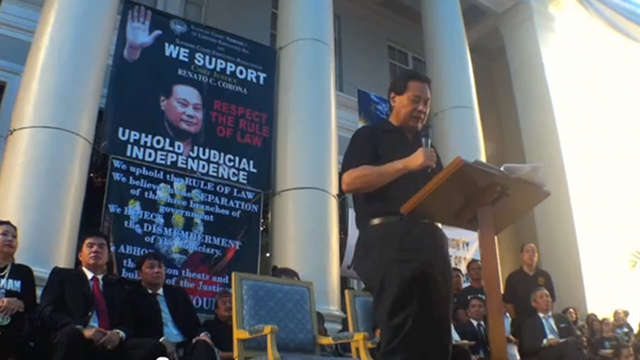 The Chief Justice is, however, entitled to a special allowance equivalent to his salary, which is P91,000 a month; a representation and transportation allowance amounting to P22,000; personal emergency relief amounting to P2,000; and “extraordinary and miscellaneous expenses” equivalent to P292,000 annually.

Section 28 of the 2010 General Appropriations Act specifies that “extraordinary and miscellaneous expenses” include, but are not limited to the following expenses:

(a) Meetings, seminars and conferences;

(h) Membership in the Integrated Bar of the Philippines;

(i) Subscription to professional technical journals and informative magazines, library books and materials;

(j) Office equipment and supplies; and

(k) Other similar expenses not supported by the regular budget allocation.

Among those the prosecution wants to summon to the witness stand are the following:

The request for subpoena also lists the following supposed reimbursements for meals. It includes an expense of P15,000 for a meal in Century Tsukiji and a reimbursement for something as cheap as P132 from McDonald’s.

The witnesses will testify in support of Article 3 of the impeachment complaint, which alleges that the Chief Justice committed culpable violation of the Constitution and betrayed public trust by failing to meet and observe stringent standards under Art. VIII, Section 7 (3) of the Constitution.

“Numerous personal expenses that have nothing to do with the discharge of his official functions, such as lavish lunches and dinners, personal travels, and vacations, and fetes and parties have reportedly been charged by the respondent to judicial funds,” it added. – Rappler.com