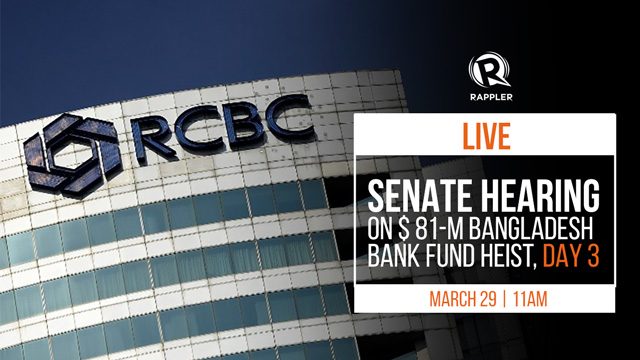 Rizal Commercial Banking Corporation (RCBC), the bank at the center of the controversy, previously said that $81 million was deposited in its Jupiter branch in Makati City. This was after Bangladeshi officials discovered that hackers targeted the Bangladesh Bank’s account with the Federal Reserve Bank of New York.

During the second Senate hearing last March 17, RCBC customer service head Romualdo Agarrado quoted former branch manager Maia Santos-Deguito as saying that she would rather release millions of dollars than get killed.

Deguito also declined to answer questions during the hearing and asked for an executive session with the senators, citing the money laundering complaint filed against her. Senator Teofisto Guingona III later revealed that Deguito claimed businessman William Go wanted 10% of the stolen $81 million – an allegation Go has denied.

Deguito did not attend the third hearing, as she requested for a week-long rest from the Senate investigation to “regain her health and balance.”