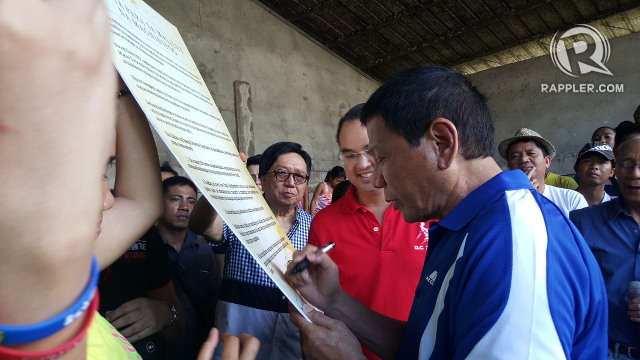 QUEZON, Philippines – The tandem of Rodrigo Duterte and Alan Peter Cayetano promised to coconut farmers in Quezon that they would benefit from the coconut levy fund within their first 100 days in office.

“I will force the issue with Congress. If there’s a need for a survey or a need for a census kung sinu-sino ang mga taong mabibigyan (of who will be the beneficiaries), we will do it, in the soonest possible time,” he added, receiving applause from an audience of around 30 farmers.

He and Cayetano then signed a “manifesto” promising 3 things under a Duterte-Cayetano government:

Coconut farmer groups insist that like the P71 billion in coco levy funds recovered by the government from SMC through a 2012 Supreme Court ruling, these shares should be public funds to be used for the benefit of coconut farmers. 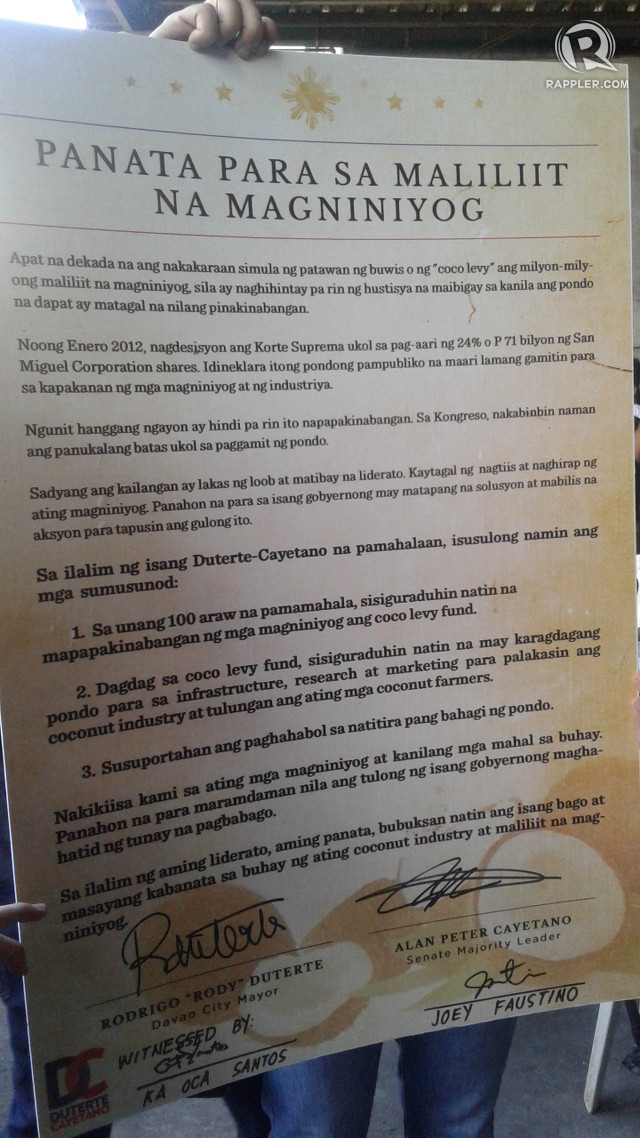 In an ambush interview, Duterte explained how he plans to use the funds for coconut farmers.

(Ka Oka says not to give the cash directly, because the cash may run out. I will return the funds but through a cooperative then we can use counterpart funds if they want.)

Oscar Santos, a former Quezon congressman who is a leading figure in the call for a coconut levy trust fund, said during the sortie that the funds should not be given outright to farmers as cash dole-outs.

Doing so is unsustainable and would cause the money “to disappear like a bubble,” he said.

As provided in the bill passed by the House of Representatives, the funds should be put in a trust fund with the interest to be channeled into programs to strengthen the coconut industry. 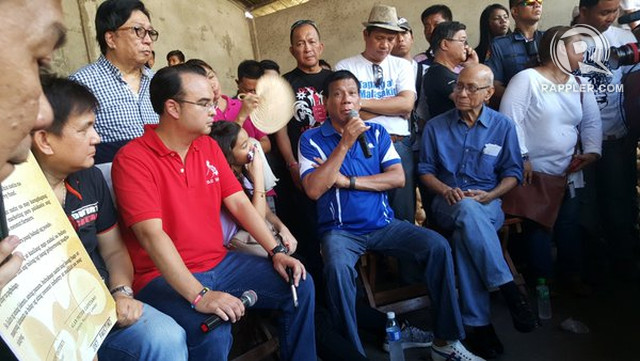 These programs can include lending facilities for farmer cooperatives, entrepreneurship programs, village-level coconut processing hubs, and scholarships for coconut farmers.

While other candidates have promised the return of the coco levy funds to farmers, Duterte and Cayetano said only they can live up to that promise because others are beholden to other interests.

(You all know that other candidates cannot say anything about what they will do with the coco levy because the one spending for them is Danding. They are beholden. So how can they make a stand?)

He was referring to the tandem of Senators Grace Poe and Francis “Chiz” Escudero, who are known to be backed by Cojuangco, the chairman of SMC.  Poe has admitted using SMC planes during her campaign.

But Poe and Escudero have denied they are puppets of Cojuangco. They have also promised the Quezon coconut farmers that the coco levy fund will be used for them. (FACT CHECK: Did Grace Poe sign the coco levy bill?)

The P71-billion coco levy funds are now with the government but are not being used because Congress failed to pass a bill creating a coco levy trust fund.

The House of Representatives passed its version of the bill but the Senate version is still on second reading. – Rappler.com