Kidapawan protester: I was shot by sniper on firetruck 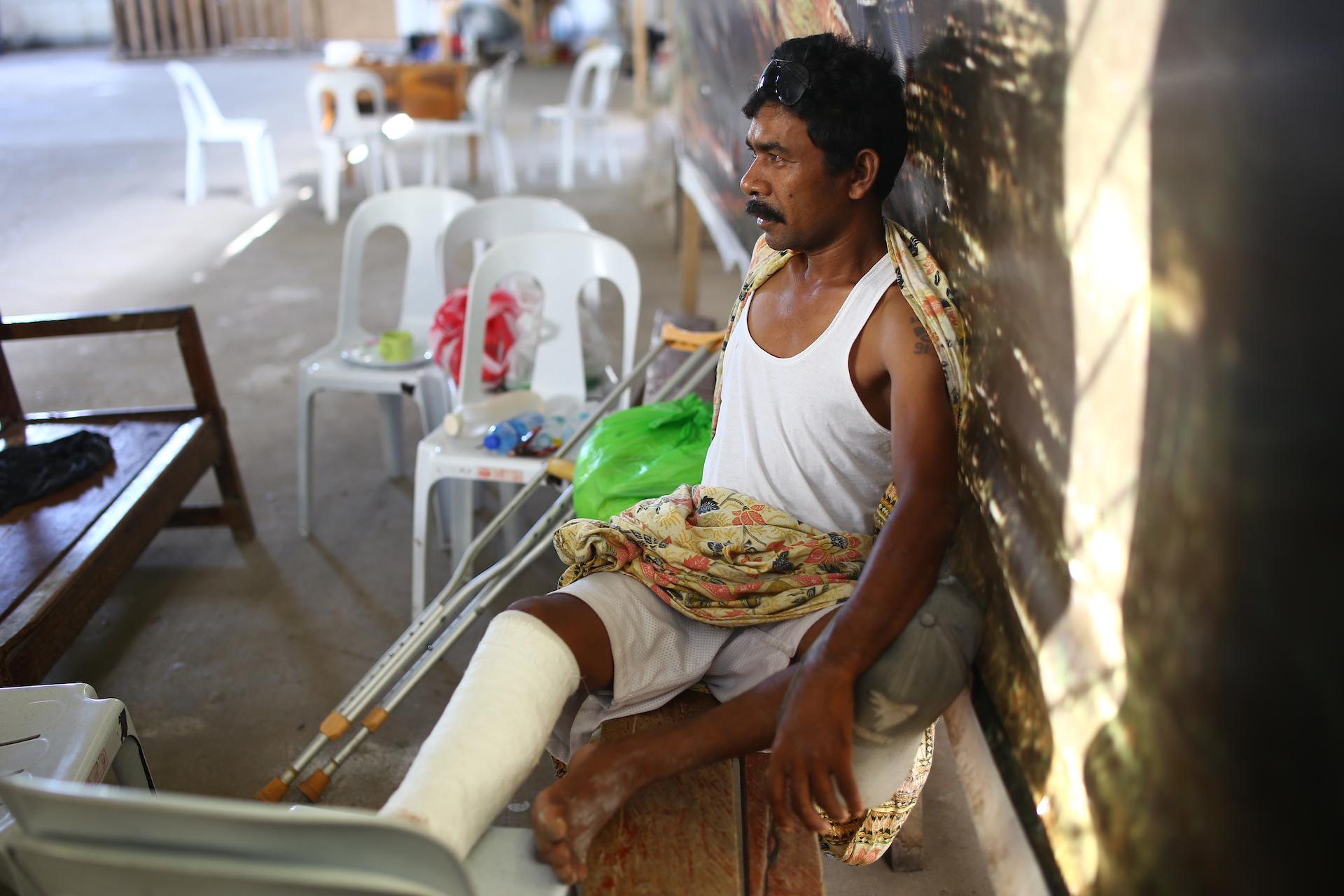 KIDAPAWAN, Philippines – Three police officers guard the entrance to the city gymnasium. There is a logbook outside, filled out by visitors with names and affiliations. Inside, detainees mill about the basketball court, some sitting on monoblock chairs, others filling out affidavits for visiting investigators of the Commission on Human Rights (CHR).

On the bleachers, at the highest row, roughly a dozen members of the regional public safety battalion maintain a relaxed watch from their hammocks. Few are in full uniform.

As of the late afternoon of Tuesday, April 5, local police put the number of detainees at 79, with 47 men and 32 women. A resolution by the City Prosecution Office of Kidapawan City charged 61 protestors with “direct assault upon an agent of a person in authority,” including seven who were hospitalized.

CHR Region 12 told Rappler that 4 had been charged with frustrated murder and others with “tumultuous affray” (a quarrel that leads to physical injuries), although the commission has yet to be provided with copies of the resolutions.

The newest addition to the detained protestors was brought in on a gurney from the Midway Hospital. He said he was the last one to be shot during the deadly protest on Friday, April 1.

‘I looked up to a sniper on a fire truck’

His name is Arnel Tagyawan, a farmer from the municipality of Antipas, North Cotabato. Tagyawan is left to sit clutching a pair of crutches to his chest. His right leg rests on another chair, encased in a cast from toe to knee. He is a small man, thin and lanky with a thick mustache. His voice is low, nearly inaudible.

The first 3 days of the protest were fine, he said, until the first of April. He was away by the river when the violence erupted, and came running to the highway. There were gunshots. He was afraid his friends had been shot. When he saw none of them were, he moved to the side of the highway by the shrubbery, a safe distance from the chaos.

“I was standing there,” he said in Filipino. “There were policemen and protesters, all of them running, and then I looked up to the fire trucks and saw the sniper on top. That’s when he shot me.”

He remembers that the sniper wore fatigues, and had “a long gun.”

Takyawan said the bullet entered his leg at the ankle and exited through the back of his foot.

“I managed to walk maybe 3 meters before my friends rescued me. I was the last one shot,” he said. “The dead, our dead, were left behind. I don’t know how many they were, because I was taken straight to the hospital.”

The admitting diagnosis for one Arnel Takyawan signed by attending physician F. Singanon notes a “gun shot wound on the right leg.” An X-ray of his foot showed Takyawan had a fracture where he said the bullet passed through. 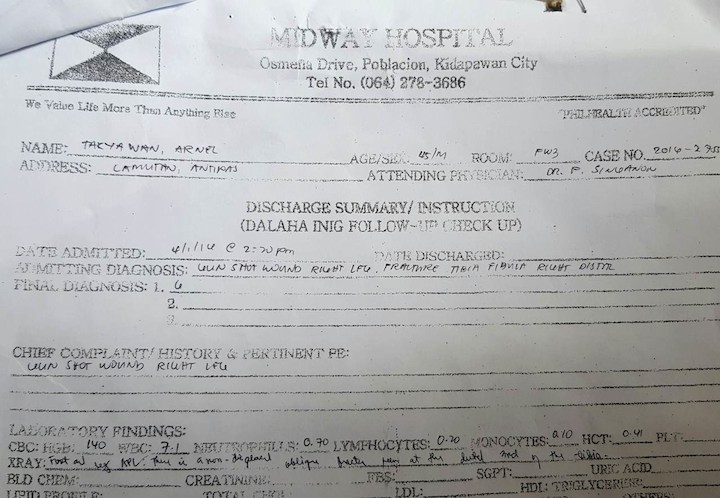 “There was no lawyer during the inquest. The fiscal went to the wounded and called that an inquest. There’s no such thing as legal or illegal here anymore. It’s martial law.”

Casilao said 12 have been seriously injured by gunshots, although 38 in total had suffered injuries from gunfire.

‘The bullet hit him and he fell’

Lumeryano Agustin, 47, arrived from Bukidnon on March 29 because he had heard there was rice to be had from President Benigno Aquino III.

Drought had hit Agustin’s town of Sakundanaon in Kitaotao hard the last 5 months. His family had been living on cassava.

“There was no water,” he said. “There was no rain. We even poured water on the banana plants, but they died anyway.” (READ: Kidapawan and why the Philippines is always short of rice) 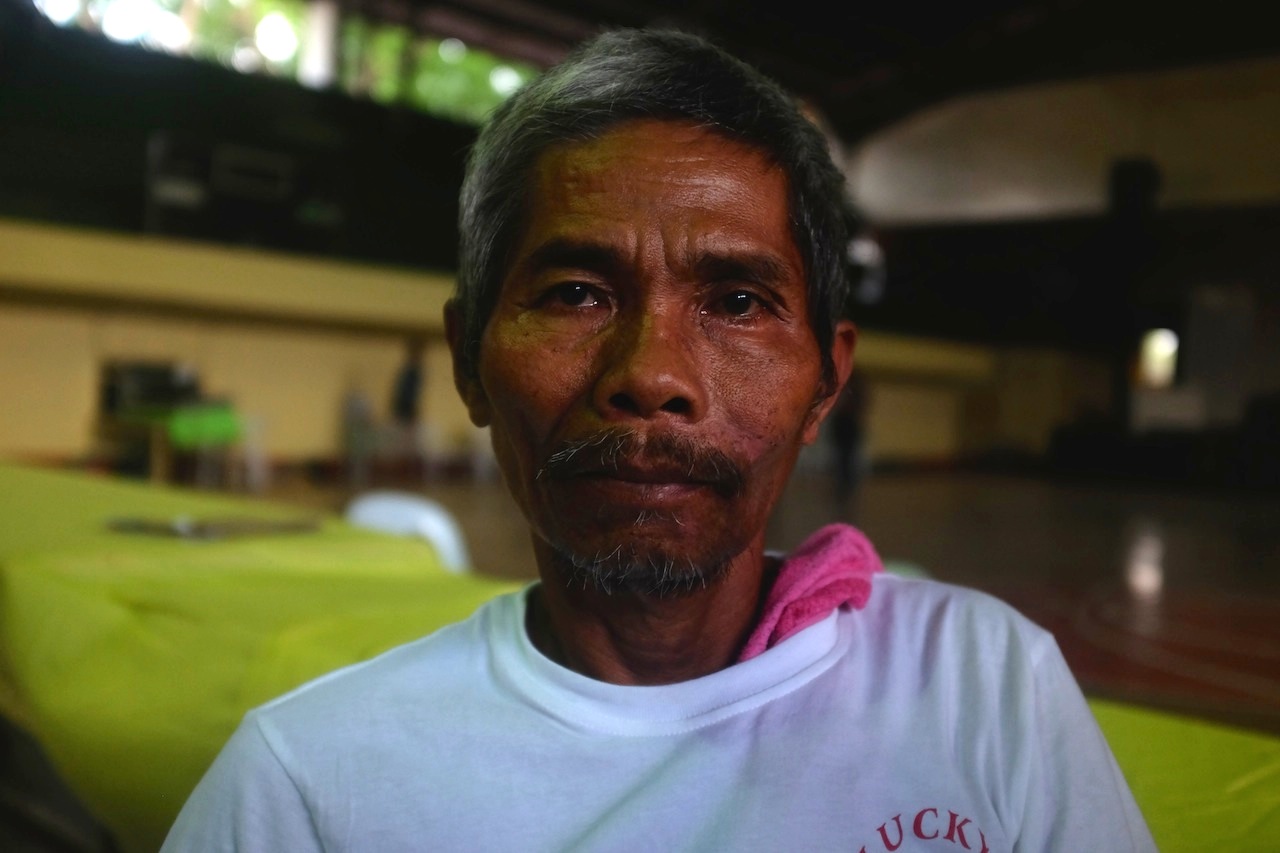 On April 1, past 9 in the morning, Agustin had been one of 6 from his town left behind by protesters at the United Methodist Church (UMC) Spottswood Compound to prepare lunch. He was outside the gate crouched over a pot of rice and talking to a young man when the commotion began.

“I heard the police say ‘one, two, three,’ then they all slammed together. I thought it was like carabaos fighting,” he said in Filipino. “So I stood up to look and there were policemen with clubs whaling away.”

He said he was standing near the gate by the trees when the water cannons came.

“Then the teenager beside me just fell to the ground – hit by a bullet in the head. There was blood coming out of his ears.”

He said he was running to a stand of trees when a pair of men dressed in black and wearing mask-like helmets chased him down with bullets. Agustin threw himself to the ground. He thought he was safe until police found him. He was cursed at, and when he raised his arms, he was put in handcuffs, then clubbed.

“When I stood up, when I started walking, they began kicking me and hitting me in the back with the club,” Agustin said. “One of the policemen who had me said, ‘Don’t beat him up anymore, he’s cuffed.’ The other cops didn’t listen, were still whaling at me and it hurt. They hit me on the neck. They hit me on the side. It was like they thought I was a pig the way they bludgeoned me.”

Policemen took him to the gym. He has not been allowed to leave since. The food is good, he said, but if he stepped out the doors they would send him back. He hopes he is let out. He hopes to bring rice home to his children in Bukidnon. He has four waiting, between the ages of 3 to 14. (WATCH: Bukidnon farmers fight against hunger)

“There is nothing for them to eat,” he said.

Germa Lumundang of Malapat, Antipas takes turns with her husband watching over their 18-year-old son Victor at the Midway Hospital’s intensive care unit. 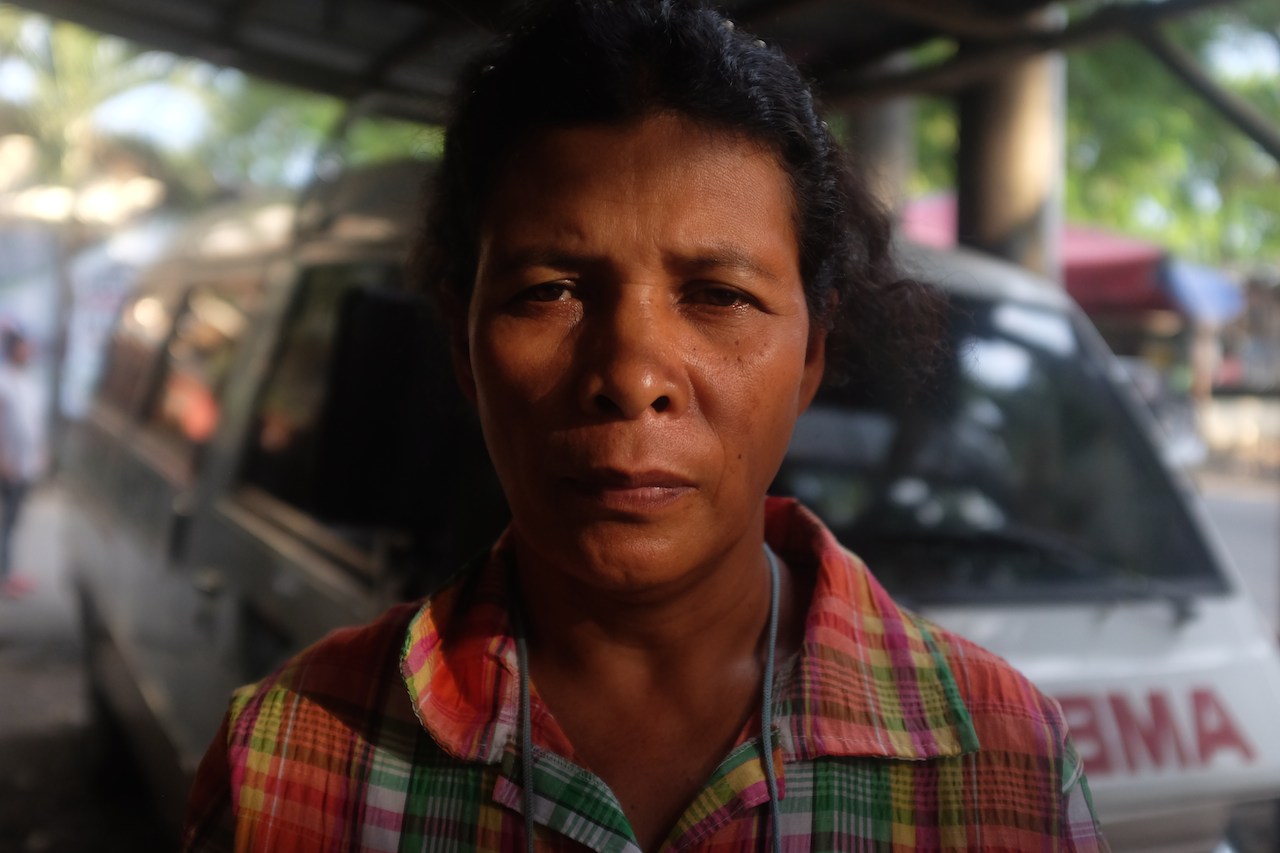 A bullet had hit Victor on his upper chest, just below his throat. The bullet exited out of his left shoulder. Three more slammed into his upper thighs, two on the left, one on the right.

Lumundang had earlier been identified as among the dead by Pedro Arnado, head of the Northern Mindanao branch of Kilusang Magbubukid ng Pilipinas (KMP).

“I can’t talk to him anymore,” said Germa about her son. “When I got here he didn’t have a voice anymore. It was hard for him to talk. If he wants something from us he’ll gesture instead. If something hurts somewhere he’ll signal to us where.”

The Lumundangs are tenant farmers. Victor is one of 8 children. The banana and corn plantation they farmed yielded at most P300 a week.

Victor attended the protest with many of the family’s friends and neighbors.

Roughly 1,500 protesters remain inside the UMC compound. The number remains fluid, with some farmers leaving for home and new contingents coming in, including 300 from Makilala town. 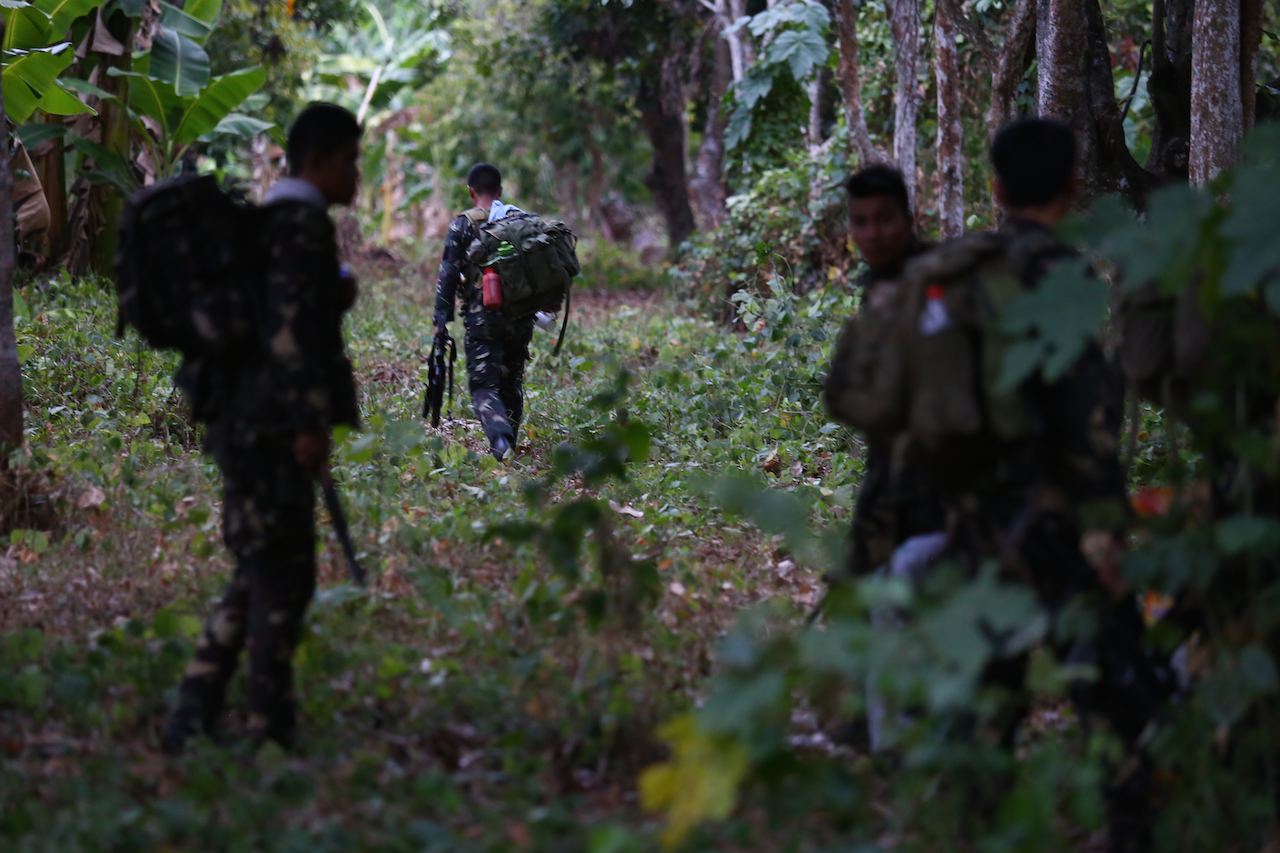 Negotiations held Tuesday, April 5, between Kidapawan Mayor Joey Evangelista and the pastors of the United Methodist Church of Kidapawan led to an agreement to remove both military and police presence within and outside the compound.

By late afternoon, police manning checkpoints outside the church gates had been pulled out.

Elements of the 39th Infantry Battalion, camped out for days inside the compound also withdrew after some reluctance. “Our orders to stay come from the police,” said one of the heavily armed soldiers.

Those who now live inside the camp survive on goods donated by celebrities. There is a relaxed atmosphere inside, with firepits burning steadily and old neighbors gathering in circles. Teenagers play on makeshift board games. Loudspeakers blare music and announcements. Temporary tents have been strung beside paths, with many lying asleep in rows.

Progressive organizations claim the protesters will remain until all 4 demands are met. They include the distribution of the governor’s promised 15,000 sacks of rice, the lowering of farmgate prices, the provision of seedlings, as well as an end to the continued militarization of their areas.

Conversations with protesters, however, narrow the demand to only one: food. (READ: How vulnerable is Mindanao to El Niño?)

Department of Agriculture chief Proceso Alcala denied the farmers’ claim over GMA Network, saying that the protestors were mistaken in saying hunger compelled them to take to the streets.

“The hardship in their areas is not very bad,” he said. He was quoted for saying that he “was at a loss why farmers were protesting,” given that province had 120 percent food sufficiency and enough rice in store for more than two weeks.

In the days after the clash, a range of casualty counts ranging from 2 to 4 have been quoted in various media. The CHR can confirm at least 2 deaths – Enrico Fabligar, a bystander and resident of Kidapawan, and Darwin Sulang, a farmer from Arakan. 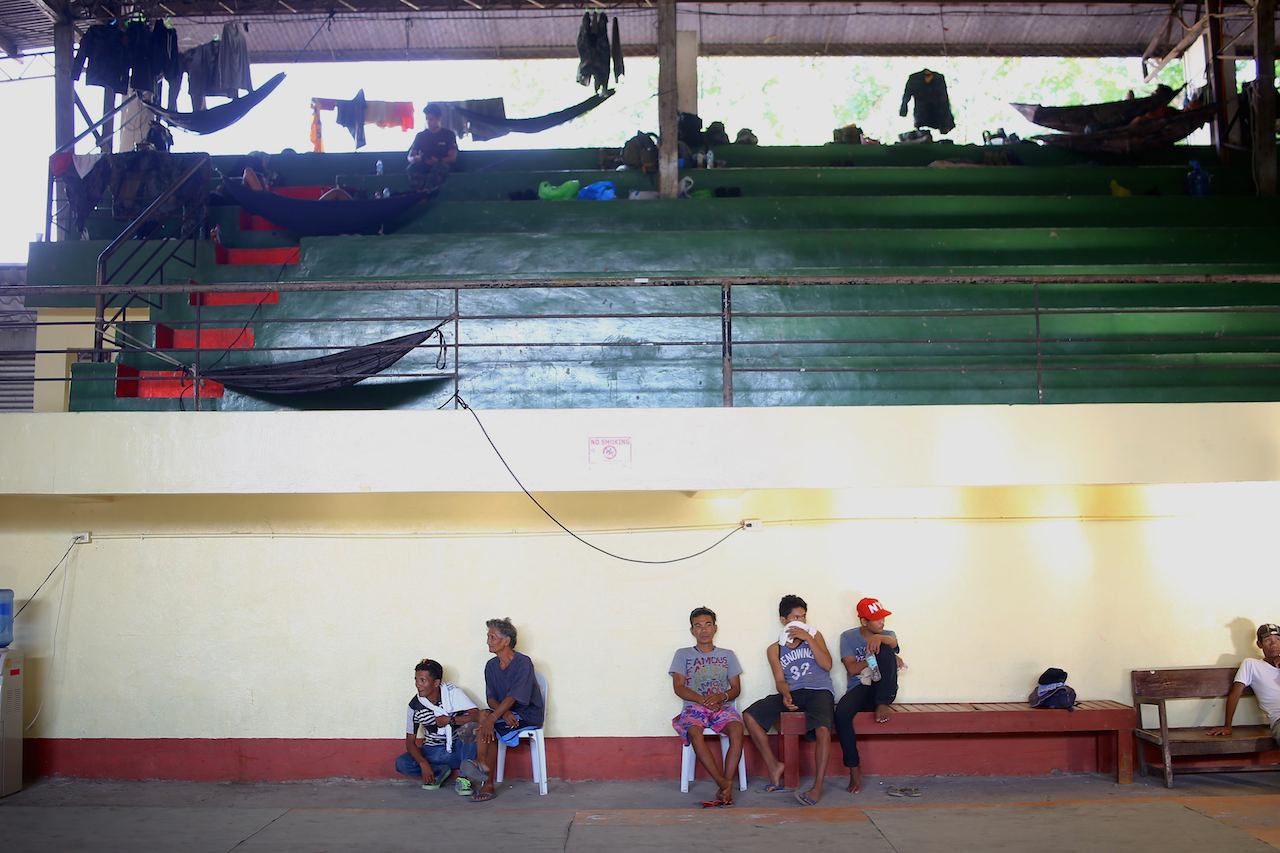 Fabliglar was killed while standing beside his home near the protest area. His body is now in the hands of his family, who said he was on his way to work when he returned home to assist an aunt who was part of the protest. TV 5 reported that the PNP fact-finding team visiting his wake promised to “look into the source of the bullet that killed Fabligar.”

Sulang’s body was brought home to Arakan for burial.

An earlier report by the The Standard, quoting CHR Region 12 Director Erlan Deluvio said that “farmers were already on their knees when shot by policemen.” Deluvio himself denies the report.

“The statement they were shot while on their knees is not true, and does not exist as far as our records show,” Deluvio told Rappler. “Maybe they want to make their statement catchy or the headline more attractive to readers.”

“I did not say anything about the knees, but maybe they heard it from people surrounding them that they were hit on the knees,” he added, “because we were executing affidavits while there was media beside us while we were writing.”  – with reports from Mark Saludes/Rappler.com