Teresita Quintos Deles, secretary of the Office of the Presidential Adviser on the Peace Process, cited the Aquino administration’s gains in the peace process during a lecture at the Ateneo de Manila University in Quezon City. She was a recipient of the Metrobank Foundation Professorial Chair for Public Service and Governance. She also said the two parties held talks in January 2012 and scheduled another round this month.

“The way ahead will be bumpy but the good thing is that both sides appear committed to engage at the negotiating table and not in the battlefield. Neither side seems poised to walk away when the going gets rough – and I am certain it will get rough many more times over,” Deles said.

Deles, however, expressed concern that violent actions on the ground alongside peace talks, in general, “create a sense of ‘disconnect’ in the public mind.”

“People begin to have the sense that the parties are just playing games… Once people lose their trust in the process, it means serious trouble for any peace table,” she said.

Jane Marie Dimacisil, a young Muslim professional who listened to Deles’s lecture, made a similar observation.

“The military would be saying that they are committed to promoting peace, becoming an actor for the peace process, but at the same time, it’s true that there is a disconnect happening,” Dimacisil said. “You’ll see extrajudicial killings, you’ll see torture, you’ll see bombings.”

“I like how they continue to cite that both parties are really committed to the negotiating table,” she said.

Deles said the public could hope for a better peace process during the Aquino administration. The government, she said, has made conflict resolution a priority amid setbacks — particularly “where the past administration left off.”

Deles, who had also served but later bolted the Arroyo administration, said Aquino “ushered in a shift in perspective in making and building peace.”

“For the first time, we have a government that states as a matter of national policy that promotion of the peace process shall be the centerpiece – not a by-the-way, not a sideline or side effect, but the centerpiece – of the internal security program,” she said before students and other professionals.

Close to the heart

How the peace process will turn out tugs at the heart of Muslims like Dimacisil.

Her family lost members – her grandfather and uncle – through involuntary disappearances in the 1970s due to the long-standing conflict in Mindanao. “It’s really disheartening,” Dimacisil said. 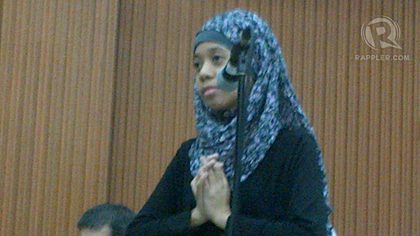 Dimacisil could only hope for “genuine dialogue.” “I believe genuine dialogue would be where parties really listen to one another, and listening would translate into action that would be beneficial to both parties, and something that’s not just a press release, something that really happens on the ground.”

Her wish, she said, is simple. “It sounds very cliché-ish but yes, peace, long-lasting peace in Mindanao. Some people would really laugh at me when I say that, but then it’s true.”

“We have to be brave and bold in seeking a final resolution of all internal armed conflict,” Deles said, “because we have to win the peace for all Filipinos.” – Rappler.com