Apr 14, 2016 3:39 PM PHT
Agence France-Presse
Facebook Twitter Copy URL
Copied
The Balikatan exercises are staged in the shadow of a festering dispute between the poorly equipped US ally and regional giant China over islands, reefs and waters in the resource-rich South China Sea 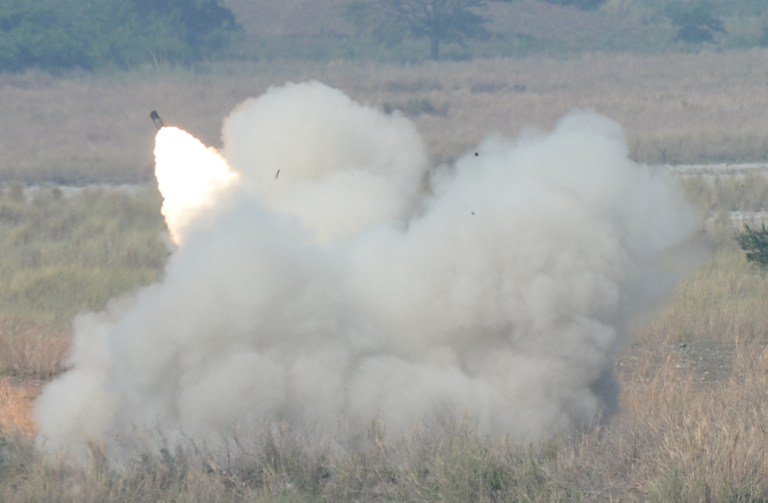 TARLAC, Philippines – Glowing projectiles lit up the Philippine sky from an advanced US long-range missile system on Thursday, April 14, in war games aimed at boosting their military alliance in the face of an increasingly assertive China.

The High Mobility Artillery Rocket System (HIMARS) was the star of a simulated assault exercise by 5,500 US and Philippine soldiers, unleashing 6 missiles at distant targets from a dry riverbed 3 hours’ drive from Manila.

US Marine Cobra attack helicopters and Philippine S211 jets also buzzed over the Crow Valley training range as Filipino and US troops acted out the capture of imaginary enemy-held territory.

The exercises were staged in the shadow of a festering dispute between the poorly equipped US ally and regional giant China over islands, reefs and waters in the resource-rich South China Sea (West Philippine Sea).

“The truth of the matter is we are allies and as allies, we need to work together,” Lieutenant-General John Toolan, the US Marine Corps Pacific commander told reporters, referring to the missile system.

“I think we will be more than happy to share,” he said when asked if the US would deploy HIMARS to the Philippines in the case of armed conflict over the South China Sea.

The system’s range is 3,000 km (1,864 miles), Toolan said, meaning it could hit vessels far from the Philippine landmass.

China claims most of the South China Sea, even waters and rocks close to the coasts of several neighbors that overlap with their claims.

Beijing has reclaimed several reefs claimed by Manila and built structures on them that the Philippines alleges were designed for military use – a charge China denies.

Although the United States has not taken a stand on the conflicting claims to the South China Sea, it has opposed China’s efforts to claim the waters and has stressed freedom of navigation in the vital sea lane.

“We have seen the capability. It is highly mobile, lethal. So I think it is one of the capabilities we want to have,” Philippine Navy Vice-Admiral Alexander Lopez said as he watched the missile firing.

Lopez, the commander of Filipino forces in the South China Sea, told reporters this would “raise the skill and the respect for your armed forces, not only for the Filipinos but also in our region”.

Toolan said the two-week maneuvers displayed the capability of both armies to deploy rapidly across the Asian archipelago.

The truck-mounted missile system had been flown aboard a giant military transport plane to an airport near the Crow Valley firing range earlier in the day from the western Philippine island of Palawan.

The Philippines has been improving its defense ties with the United States to help upgrade its capability to defend its territory.

The Philippines has allowed American forces to rotate through 5 Philippine bases including one on Palawan and another in the north, both close to the South China Sea.

Asked if HIMARS systems would be deployed in these 5 bases, Toolan said: “That’s not necessarily in the plan but obviously, with the mobility the HIMARS gives you, you can use it anywhere.” – Mynardo Macaraig, AFP / Rappler.com