Koronadal protesters victorious: 2,000 sacks of rice given to farmers 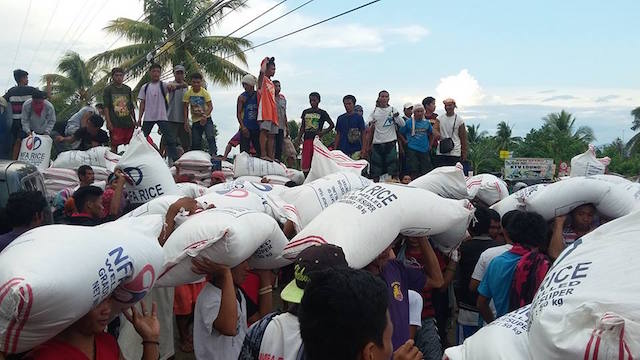 COTABATO CITY, Philippines – Hundreds of hungry farmers affected by drought emerged victorious after 4 days of protests, after the Department of Social Welfare and Development (DSWD) in Region XII decided to release 2,000 sacks of rice as government aid.

In a post on Facebook, police in the province said that the rallyists decided to end their protest at around 4:30 pm on Monday, April 25, “after coming to terms with the negotiating team.”

“We will terminate our rally today but farmers will stay overnight here and will go home tomorrow,” Joselito Roxas of Kilusang Magbubukid ng Pilipinas (KMP) said in a local radio interview.

Roxas said that although their demand for 15,000 bags was not granted, he said the farmers were “happy” with the initial aid.

He added that each rally participant will bring home one sack of rice.

“We consider this as a victory,” Roxas said, following a dialogue with representatives from DSWD, the Department of Agriculture (DA), and the South Cotabato provincial crisis management.

“DA also promised to give us fertilizers and other farm inputs, [which] will be distributed in the farmers’ communities in the coming days,” Roxas said.

It was quiet at the rally site where protesters were resting at around 4 pm. Three hauler trucks with DSWD markings arrived, and the farmers who came close to the trucks were told that the cargo was for them.

Police stationed nearby moved back as DSWD personnel alighted from the truck and allowed the farmers to unload the goods.

Farmers were chanting, “Salamat (Thank you),” “Tagumpay (Victory).” No commotion, no grabbing occurred.

But according to insiders, the crisis management group headed by Governor Daisy Avance-Fuentes was surprised when a truckful of rice immediately came. The initial decision was to allow the farmers to go home first and distribute the rice in the communities.

Some netizens also criticized the protesters who blocked the road for their protests. “Lucky for them, they just lie down on the street, brought misery to motorists and then get what they want,” one netizen said.

At least two protesters were given medical assistance after they felt ill from too much exposure from the heat of the sun. – Rappler.com