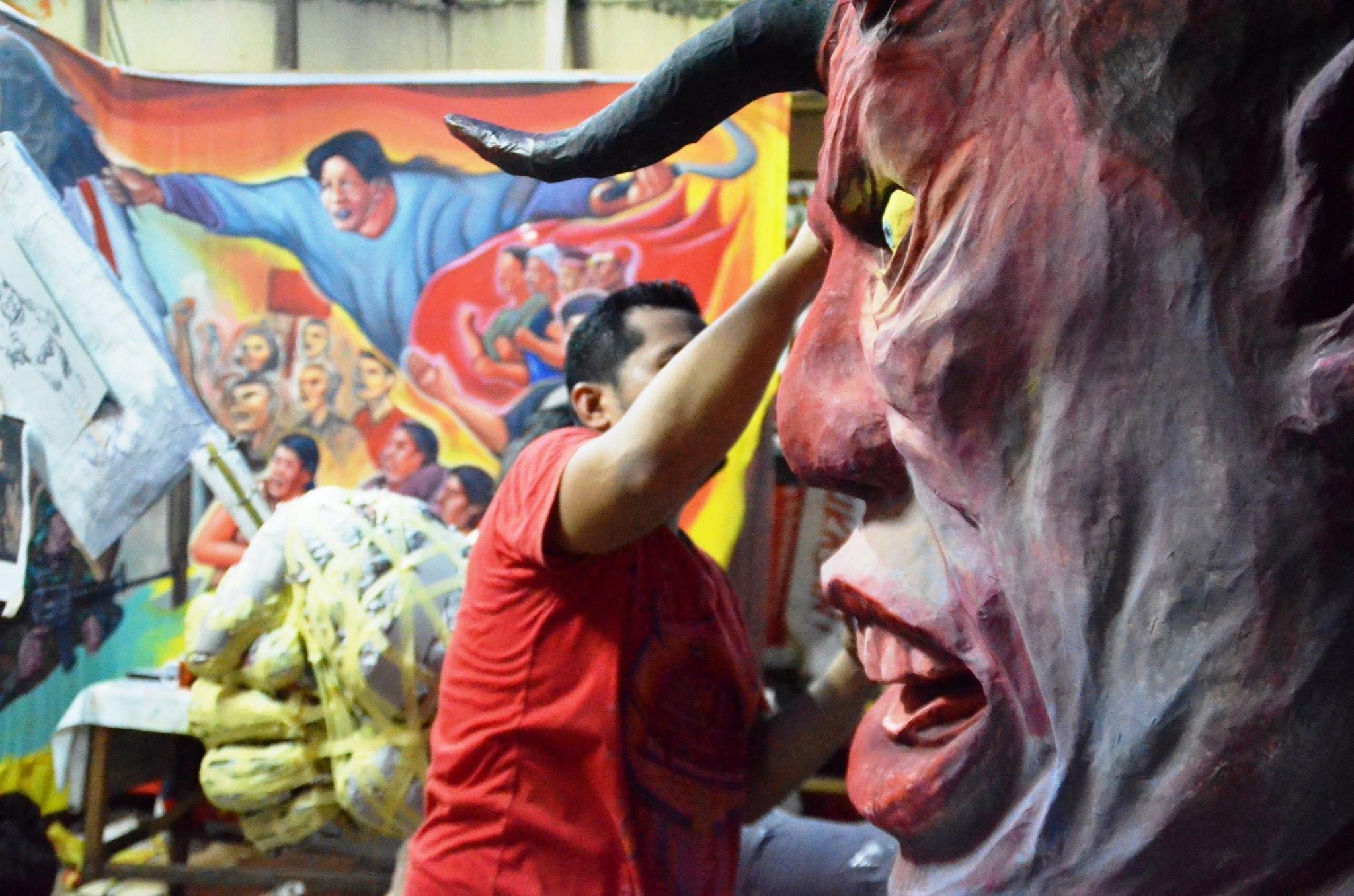 MANILA, Philippines – Under the searing heat of the sun on Sunday, May 1, militant workers set fire to their last Labor Day effigy of President Benigno Aquino III, which depicts the chief executive as a “butcher” of jobs.

They condemn Aquino’s dismal 6-year record on labor marked by “widespread contractualization and the pressing down of wages,” according to Kilusang Mayo Uno chairperson Elmer “Ka Bong” Labog.

The plight of 75 dismissed workers of fruit exporter Nakashin Davao International, who were allegedly urged by the Department of Labor and Employment (DOLE) to accept a P1,000-settlement offered by the Japanese-owned company, reflects the condition of millions of workers across the country, said a local union.

“Workers who have worked for 3 years should receive around P5,000 payment for SIL (service incentive leave). Some of us have worked for 6 years. We can’t accept a lower amount because there is a labor standard. What’s the use of DOLE if it cannot enforce the labor standards, worse, it it convinces workers to accept substandard benefits?” lamented Lester Pillado, president of the Nagkahiusang Mamumuo sa Nakashin

The workers of Nakashin have been picketing the regional office of DOLE in Davao. On Sunday, they will join other workers to press their demands.

Thousands of workers and and advocates of their rights were expected to attended protests in various parts of the country including Metro Manila, Cordillera, Central Luzon, Southern Tagalog, Bicol, Eastern Visayas, Central Visayas, Panay, Caraga, Socsargen, and Southern Mindanao, KMU announced in a statement.

At noon on Sunday, protesters converged at various points in Manila before marching to Mendiola, where they will burn Aquino’s effigy.

On the eve of Labor Day, Aquino hailed the country’s workers at home and abroad, recognizing their contribution to the economy. 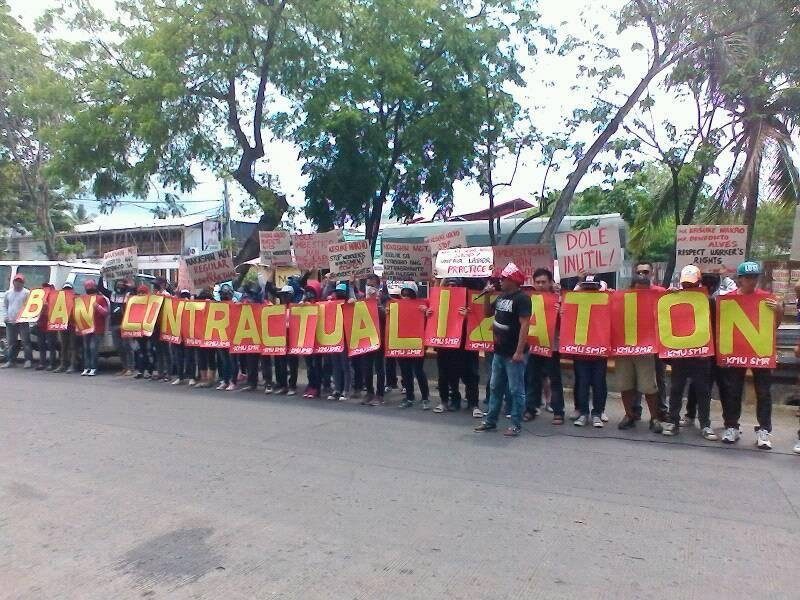 Challenge to the next president

The May 1 protest is also the workers’ show of force “to push for the realization of presidentiables’ promise to end contractualization,” and to warn the candidates that the labor sector will “take to task the next president if he or she fails to carry out his or her promise on the issue,” said Labog.

All presidential candidates vowed to end “endo” or “end of contract”, an alleged practice of companies by which they hire employees for less than 6 months to avoid being covered by the labor code requirement to regularize employment after that period. The 1987 Philippine Constitution mandated that “the state shall afford full protection to labor” and workers “shall be entitled to security of tenure, humane conditions of work, and a living.”

Analysts noted that “for the first time in Philippine electoral history, labor contractualization is a pivotal campaign issue,” an opportunity that Filipino workers would like to seize as they observe International Workers’ Day. (READ: Can the next president end contractualization?)

On Sunday, the National Anti-Poverty Commission’s Formal Labor and Migrant Workers (NAPC-FLMW) Sectoral Council, however, urged the candidates to bare their plans on how they will exactly address the issue.

“There is a loophole in our labor laws, which is why many companies have been able to get away with legal charges. We need to map out strategies on how to address the continuously eroding job security of government and private sector employees,” said Edwin Bustillos, sectoral representative of the NAPC-FLMW.

Bustillos also noted that the Security of Tenure Bill “has been languishing in both houses of congress for such a long time.”

Senator Sonny Angara, chairman of the Senate committee on labor, noted that this is a “bit more complex” challenge that requires the industry, government, and labor to work together.

“To end contractualization, you need to look at the laws which limit training/apprenticeships, but at same time provide some degree of security for workers,” Angara told Rappler.

According  to Angara, the issue is not only to guarantee full tenure but to ensure that workers will have recognized credentials and an ability to earn more once they reach certain levels of training or competence.

“Our qualifications framework is important because it will give workers something to look forward to,” Angara noted, explaining  that “if they are not earning fully while training, at least they know that if they reach a certain level, they will be guaranteed a certain position or compensation. Other countries have this, we don’t.” 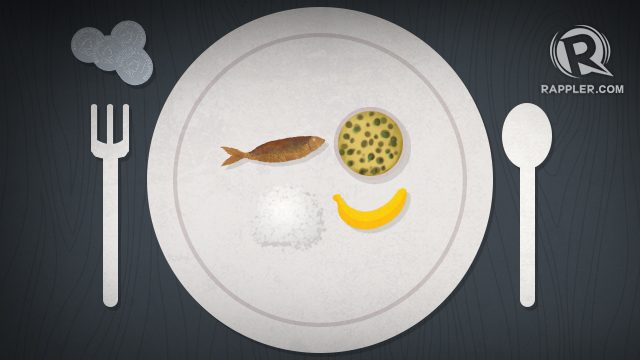 The country’s unemployment rate has decreased from 6.6% a year ago to 5.8% in January 2016, based on data from the Philippine Statistics Authority (PSA).

“Three out of 10 employed are either self-employed or unpaid, this includes jeepney dispatchers, sidewalk vendors and other informal low-paying jobs,” said Anakpawis Representative Fernando Hicap.

At least 7.9 million workers said their wage is inadequate, according to the Labor Force Survey released in March.

The government pegged food and non-food need at P417 a day, but even the current highest daily minimum wage rate, which is P481, could barely meet the requirement. Metro Manila has the highest minimum wage rate relative to 16 other regions in the country, but it’s real value, according to TUCP, is merely about P316.

Data bank IBON, meanwhile, said that current wages are less than half of the estimated daily amount of P1,088 needed for a family of 5 to meet their basic necessities.

KMU and allied labor groups are demanding at least a P750-national minimum wage, which they described as a “family living wage.” – Rappler.com