Facebook Twitter Copy URL
Copied
The Left's nominees are 'not necessarily communists, but they have to be patriotic and progressive,' says CPP founding chairman Joma Sison

“The NDFP (National Democratic Front of the Philippines) and CPP (Communist Party of the Philippines) welcome the magnanimous offers of President-elect Duterte of Cabinet positions,” Jose Maria “Joma” Sison, the founding chairman of the CPP, told Rappler.

Sison did not mention specific nominees from the Left, but noted that “such persons are not necessarily communists, but they have to be patriotic and progressive.”

According to Sison, who is now the chief political consultant of NDF, the network has now a committee from which they can “choose persons who are people-oriented, competent, honest, and diligent for recommendation to government positions.”

NDF, CPP’s political arm, also represents the party and its armed wing, the New People’s Army (NPA), in the peace talks with the government.

“They will study the offers most seriously and will decide how they can help in the best possible appointments while the peace negotiations are moving forward,” Sison said.

“They can be appointed by RD (Rodrigo Duterte) as soon as needed, irrespective of the rate of progress in the peace negotiations,” he added.

Duterte, who was Sison’s student at the Lyceum University in the 1960s, is the longtime mayor of Davao City, which is near one of the communists’ strongholds in Mindanao.

Sison, now 77, fled to Europe to seek asylum as a political refugee soon after peace talks failed and has stayed abroad since 1987. 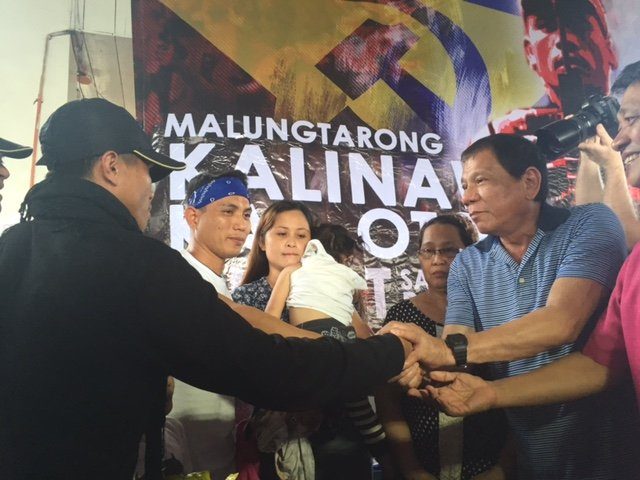 Prospects for the resumption of the talks with the communists resurfaced during the campaign season after Sison and Duterte, in a chat via Skype, agreed to observe a ceasefire between government and the NPA if Duterte wins. They now seem brighter as Sison welcomed the nominees who will steer the government’s side of the talks.

“We also welcome the appointment of Jess Dureza as peace adviser and Bebot Bello as chief negotiator with NDFP,” Sison said.

Jesus Dureza and Silvestre Bello III are not new to the peace process. Dureza was the Presidential Adviser on the Peace Process under the Arroyo administration while Bello took part in the government’s peace negotiations from the time of President Corazon Aquino up to the time of Arroyo.

President Benigno Aquino III’s administration suspended the peace talks in 2013, accusing the communists of insincerity in efforts to achieve a political settlement. The talks, which began two decades ago after President Cory Aquino was catapulted to power by a people’s uprising, have also failed under succeeding administrations.

Sison earlier suggested that he was not only optimistic in reviving the peace talks with the new government but also in ending his exile under Duterte’s presidency. – Rappler.com