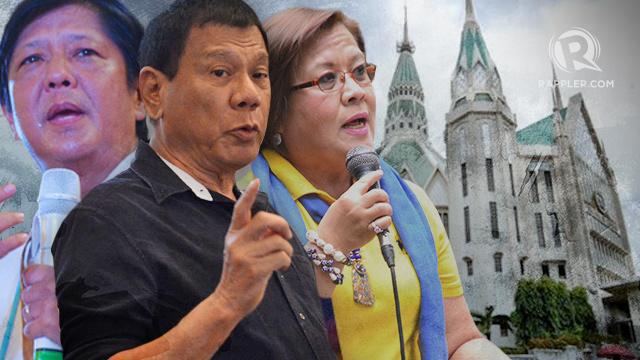 The Iglesia ni Cristo (INC) vowed to stand in the way of the former justice secretary after she expressed interest in pursuing the illegal detention case filed by expelled minister Isaias Samson Jr against the church leaders. (READ: Why De Lima is target of Iglesia ni Cristo anger)

INC leaders had reportedly demanded that local candidates remove De Lima in their sample ballots, in exchange for the sect’s coveted endorsement.

Candidates have been seeking the endorsement of the INC every election, as the church with 1.37 million members is believed to practice bloc voting. (READ: INC: From rag-tag sect to influential wheeler dealer?)

Recent scandals in the INC have cast doubt on the power of the church to deliver bloc votes. In 2015, scandals involving alleged corruption as well as a family feud began to rock the INC.

Did this affect the church’s bloc-voting power?

After this, we then checked the results of the 2016 elections in these areas.

Duterte and Marcos won in all these identified areas. Those located in Agusan del Sur, Nueva Ecija, Rizal, Dasmariñas City, and Quezon City delivered anywhere between 98% and 100% of votes for these candidates – proving that the INC’s power to influence voters in these areas remains considerable.

Also, in these places, the 12 INC-backed senatorial bets won, and De Lima managed to get 0% to 0.2% of votes – proving the success of INC’s campaign against her in these areas.

But in the remaining precincts we identified in the 2013 polls, the lead of Duterte and Marcos aren’t that high:

In the end, only 9 of the 12 senatorial candidates endorsed by INC won and were already proclaimed. INC-backed Romualdez and Tolentino were beaten by De Lima and Francis Pangilinan.

And while Duterte is already the clear winner in the presidential race, Marcos remains behind Leni Robredo in partial tally of votes.

It might be the same trend in the local scene.

A source told us that Caloocan is an INC stronghold, but this year’s election results prove otherwise. Duterte and Marcos led their respective races by only around 40% of votes, and at least 3 non-INC-endorsed senatorial bets – including De Lima – entered the top 12 in the city.