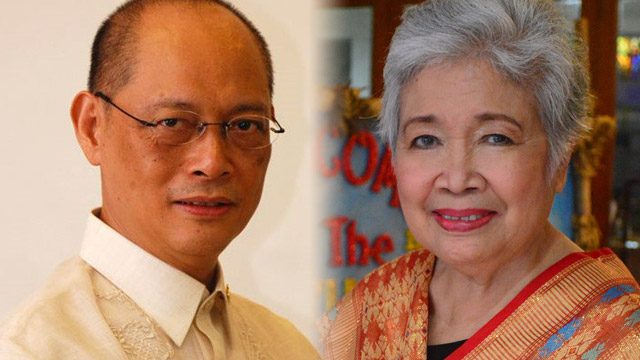 Duterte bared his latest Cabinet choices in an interview with reporters in Davao City late Saturday night, May 28. (READ: LIST: Who’s who in the incoming Duterte Cabinet)

Briones and Diokno both served the Estrada administration.

“Leonor Briones, she used to be national treasurer, I offered her the Secretary of Education portfolio,” Duterte said.

Briones, who is best known for being National Treasurer under the administration of President Joseph “Erap” Estrada, asked for until Tuesday, May 31, to make her final decision, said Duterte.

The president-elect said he already has one task for Briones, should she accept the post: iron out the problems in the implementation of K to 12.

“She is quite familiar with the problem we are facing with the implementation of K to 12. There will be a lot of students that will be marginalized or would not be able to enroll and a good number of teachers also who have lost their positions. So problema ‘yan. (That’s a problem)” he said.

Briones is the lead convenor of Social Watch Philippines. She is a professor emeritus of public administration at the National College of Public Administration and Governance (NCPAG) of the University of the Philippines (UP) Diliman.

“I have [taken] in Benjamin Diokno, the budget secretary of so many presidents, for the budget and management department,” said Duterte.

Diokno is an economics professor at UP. – Rappler.com