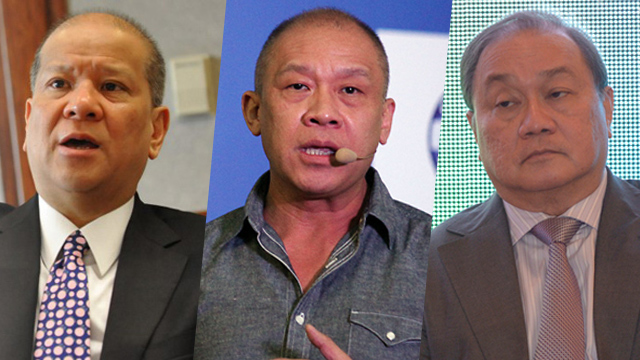 PLDT and Globe in separate statements on Monday, May 30, said that they will each acquire half of all equity interest of SMC’s telecommunication business. (READ: The future of 700 MHz band remains unclear)

The Pangilinan-led telco said the acquisition entails P52.08 billion for 100% equity interest in Vega Telecom, Incorporated and the assumption of around P17.02 billion of liabilities.

“SMC wanted to divest from telco business while we were keen on acquiring it. It was just mutual. Plan is to divest our entire stake in Beacon, we’re talking to certain private equity funds for remaining 25%,” PLDT chairman Manuel V. Pangilinan told reporters during a briefing in Makati City. 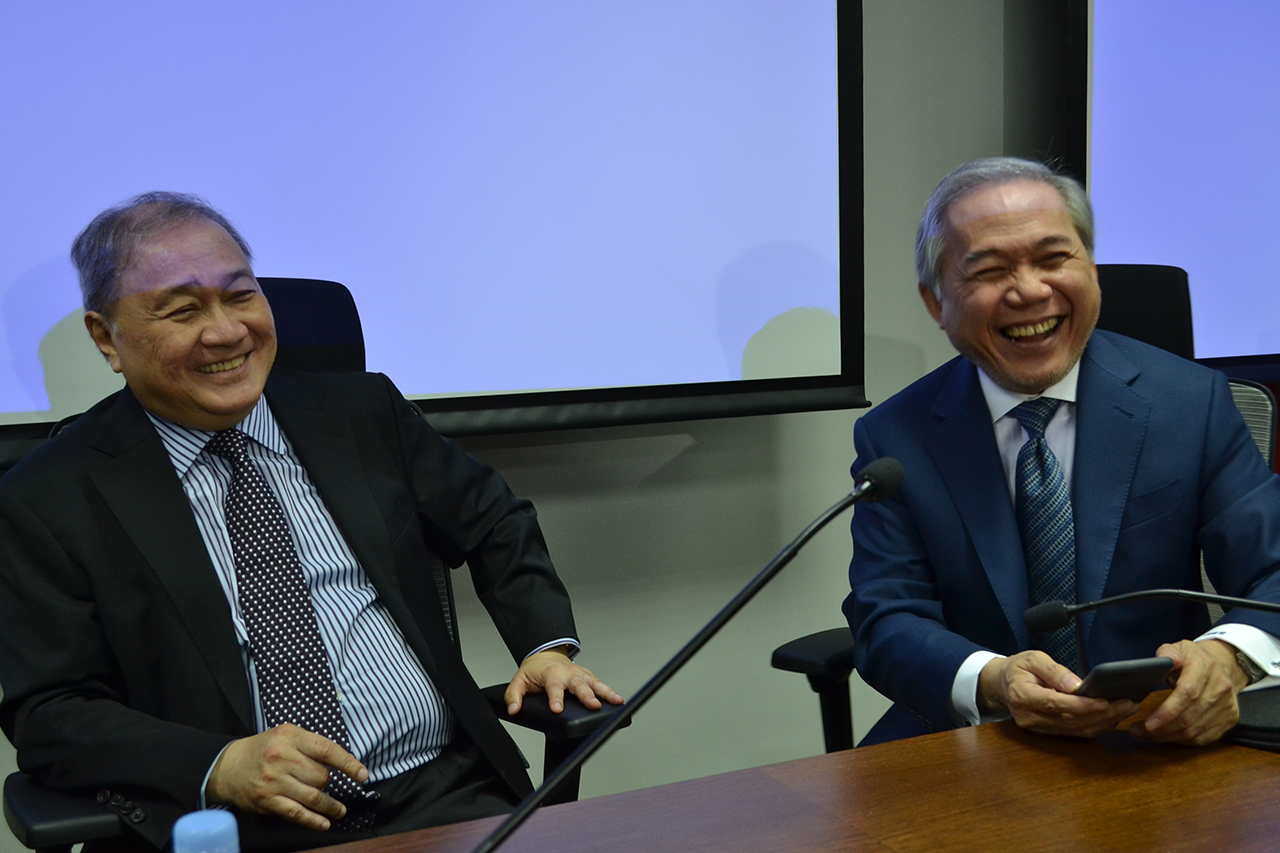 Asked when PLDT started talking with Globe, Ray Espinosa, who heads PLDT’s regulatory affairs and policies office, jokingly said: “The story on when we started dating is not important because we are already married.”

Another main Philippine unit of First Pacific, Metro Pacific Investments Corporation, announced today that it will buy the 25% stake of PLDT in Beacon for P26 billion.

“Proceeds from PLDT’s Beacon sale will be used for the co-acquisition of SMC telco businesses,” Pangilinan said.

The acquisition deal will now give the two telcos access to more radio frequencies, in particular the 700MHz, but will also involve “a return of certain frequencies to the government, which will allow for a 3rd competitor to enter the market.”

“The transaction is not on assets covered, it is the entire company, 50-50 basis. We also have signed powers, it is an operating company as you know, it has its own capacity nationally. It is operating on more concern basis, it is in process of building out,” Pangilinan added.

Globe: Competition to heat up

For Globe president and CEO Ernest Cu, the Philippines will see tougher competition in the telecommunications industry, although his telco and PLDT cooperated here.

“This move will be in line with President-elect [Rodrigo] Duterte’s call for better telecommunications and Internet services,” Cu told reporters in a separate media briefing in Makati.

Globe said the transaction is seen to benefit its mobile Internet customers, given the added capacities and greater geographic coverage that additional spectrum, particularly that of the 700MHz frequency, can provide.

For 2016, Globe said it has earmarked a capital spending budget of about $750 million, which is slightly higher than the one recorded last year.

Both Globe and PLDT said the deal will further improve Internet and data services for the public, and speed up the country’s overall development efforts. 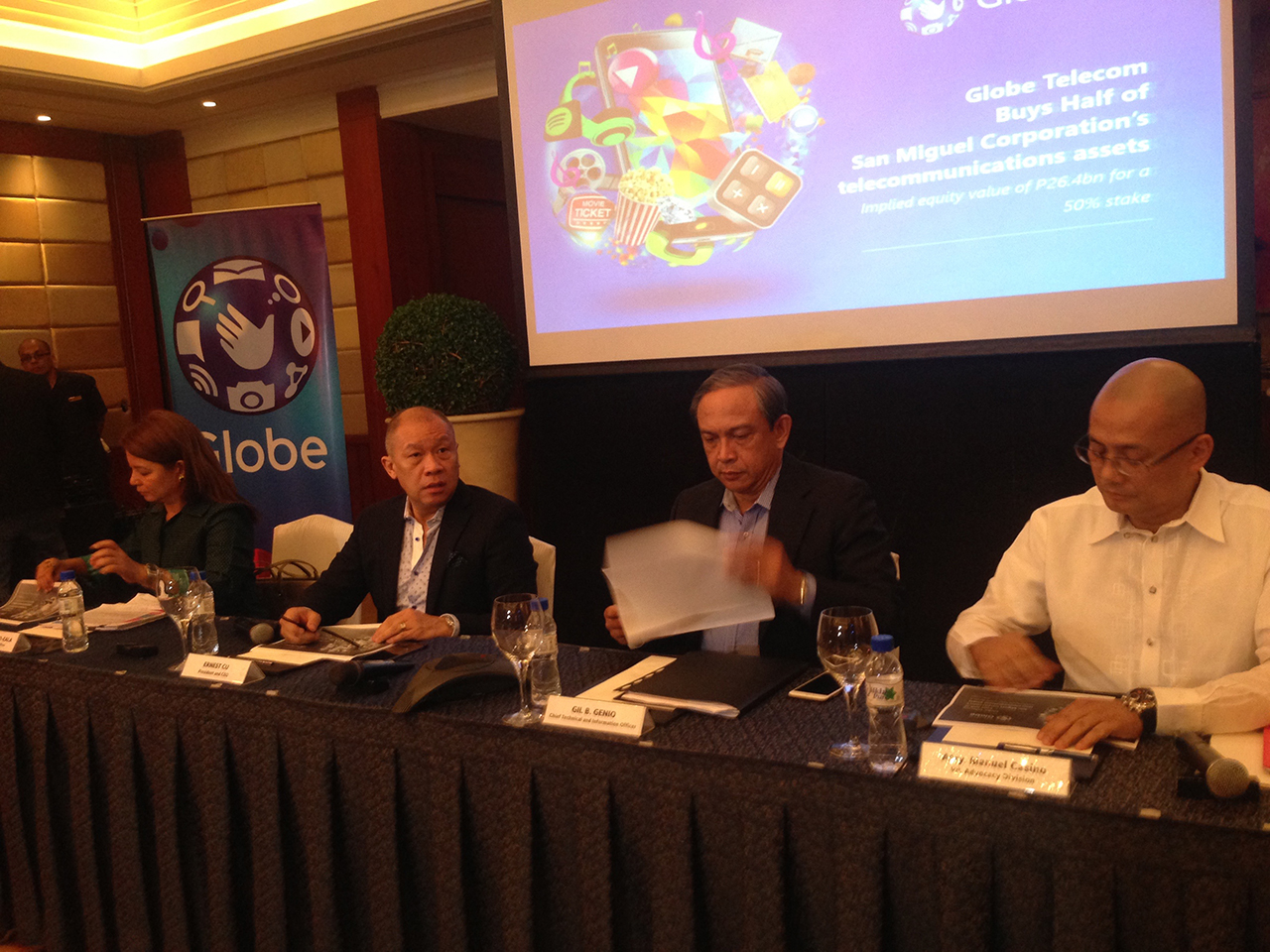 According to Pangilinan, subcribers may feel better services “within 6 months.” But for Cu, Globe subscribers will start feeling improved services “in 3 to 4 months.”

After exploring possible joint venture deals with other potential partners, SMC said in a separate statement that it was convinced that the proposal presented by PLDT and Globe is the “most expeditious, feasible and in the best interest of the consumers, its stockholders and all the parties involved given the current situation.”

“This is a sacrifice we have to make to finally unlock the full potential of our high-quality, mobile broadband spectrum faster and allow consumers access to its benefits through the combined resources, network and expertise of the two carriers,” SMC president and COO Ramon S. Ang said.

Following the collapse of talks with Australian telecom Telstra Corporation, SMC said the obvious commercial and legal risks of pursuing the venture alone far outweighed the potential rewards for the company and its stakeholders.