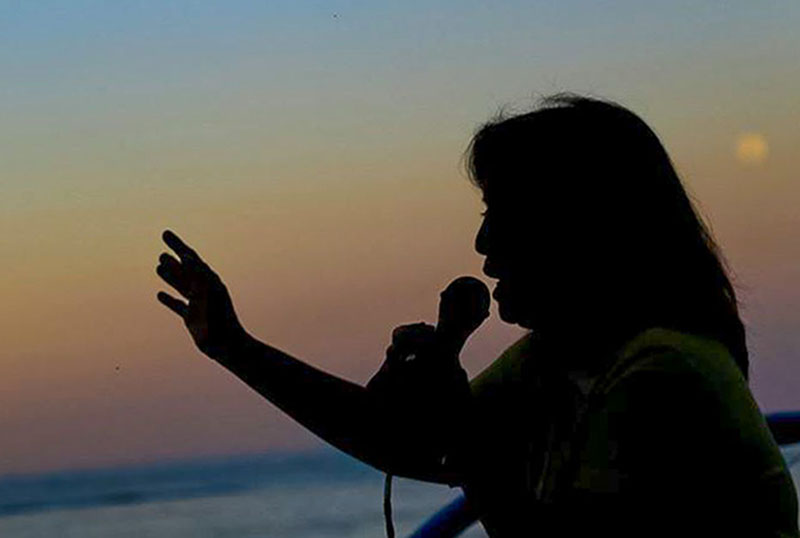 don’t have what it takes, she would often say. But when the situation called for it, Maria Leonor “Leni” Robredo ran a passionate but disciplined campaign for vice president, breaking free from the bottom of the surveys and slaying the vaunted money and machine of the Marcoses.

Only a few months ago, the Aquino administration’s vice presidential candidate could breeze through airports and public spaces without causing a stir. Upon seeing her, a handful of people would start talking in hushed tones, wondering who the vaguely familiar woman was. Robredo’s alert campaign aides – mostly twenty-somethings – would notice, and she would then approach them and introduce herself.

The outgoing congressional representative of the 3rd district of Camarines Sur ran against 4 candidates – all incumbent senators – who have run national campaigns and enjoyed the platform and resources that came with a Senate seat.

Three months before she finally agreed to run in September 2015, Robredo’s public opinion ratings were almost nil at one percent.

If she were to be “cerebral” about it, the answer to the persistent courtship of the ruling Liberal Party and President Benigno Aquino III would be no, she said a few days before she declared her candidacy.

“All the odds were against me,” she recalled.

“Most of the candidates have been planning for this all their lives. May mga organisasyon na in place, naisip na nila kung paano gagawin ang kampanya. Parang ako, lumundag muna bago mag-plano (They already have organizations in place, they already thought about how they’d run their campaigns. I took a leap even before I made plans),” she said on the sidelines of their last provincial rally in her hometown of Naga City.

When Leni Robredo takes the stage during campaign rallies, it’s not unusual for the audience to fall silent, stay quiet, and at times shed a tear or two.

Unlike the candidates who speak before and will speak after her, hers is a speech that’s almost always devoid of jokes, barely contains promises, and makes no mention of the gains of the administration, of which she is a part.

Instead, she tells a story.

It is part coming-of-age and part love story, as she tells the audience why she joined public service, how she met her late husband Jesse Robredo, about her struggles as a young-mother-slash-lawyer, why she chose to lawyer for the poor, about the pain of losing the love of her life, and eventually, how and why she found herself gunning for an elective post in 2013.

Jesse, former interior secretary and long-time Naga mayor, is a prominent character in her narrative. After all, Jesse had always been – and was always supposed to be – the lone Robredo in government.

But those plans changed on August 18, 2012, when the plane he was riding crashed off the coast of Masbate.

(When my husband died, I became very fatalistic. For me, it’s always ‘thy will be done.’ Unlike before when my life always had a plan. Before, I’d always say ‘never.’ With my husband’s death came the acceptance that anything is possible.)

But being Jesse’s widow was both a boon and bane for Robredo during the campaign.

While the “Robredo brand” offered familiarity, many criticized her for “necro-politics” – or using the death of a loved one for political gain. There were also those who hit her for being “only” Jesse’s widow and for supposedly having nothing else to show.

Yet, she converted non-believers every step of the way. And there's no better proof of this than the upward trajectory of her survey numbers leading to election day on May 9, 2016.

Crafting her own narrative

The challenge, Robredo told Rappler in an interview, was to introduce herself while letting people know she was more than just her captivating story.

The reluctant politician spent the past decades working behind the scenes, helping her husband lead and manage Naga as a mayor.

WITH THE PEOPLE. Meeting with constituents in a remote barangay in Camarines Sur. Photo from Leni Robredo Facebook

Yet it was also Jesse who always imagined his wife as an ideal fit in politics and governance. Whenever he’d hit the term limit as Naga City mayor (in the Philippines, you are only allowed a maximum of 3 consecutive mayoralty terms), allies would clamor for Leni Robredo to take over.

(All those times, I’d tell him: I don’t have what it takes. He’d always tell me that I didn’t believe in myself enough. And he’d remind me that he wouldn’t be able to do what he does without me. Maybe I was really the wind beneath his wings.)

Barely a year had passed since her husband died when their political allies in Camarines Sur started fighting months before the 2013 senatorial and local elections. Supporters told her only she could end the wrangling – by running.

At the last minute, Leni Robredo was persuaded to run for Congress against Nelly Villafuerte of the politically entrenched Camarines Sur clan.

Unlike Villafuerte, Robredo had little campaign funds to speak of. Instead of big rallies, she’d campaign before small groups, bringing with her a ragtag army of campaign volunteers and a portable sound system. Villafuerte would counter by hosting huge gatherings with generous raffle prizes.

Robredo won that race – and by a landslide.

NEOPHYTE WINS. Leni Robredo during her proclamation as Camarines Sur 3rd district representative on May 14, 2013. Photo by Allan Camata/Rappler

“That’s when I realized money isn’t everything in politics,” Robredo would say.

(Money isn’t the most important thing in elections because even if people accept these favors, they’ll vote according to conscience. Everywhere I go, I boast of this: back home in Naga, in my district, even if you don’t have money, you can win. I think this is a valuable lesson for us to change the way elections work, the way politics works.)

The comfort of Naga

She was born in the city. It's where she grew up, fell in love, raised a family.

One of Robredo’s favorite stories told and retold in the campaign involves her first and last pregnancies.

She was due in a few weeks’ time just as Jesse was campaigning for his first term as Naga City mayor. There was a rally in a far-flung barangay and Robredo herself had to haul the sound system. She even did the heavy lifting by herself.

“It’s because then, only Jesse and I believed in each other,” she said, laughing.

Just as soon as she was done driving from the rally venue, Robredo’s water broke. She went to the hospital and gave birth to their eldest daughter, Aika. “When Jesse came, his child was already there,” mused Robredo.

Years later, Robredo had taken on a job with Saligan, an alternative law group that catered mostly to the poor. During one trip to a far-flung island barangay, a pregnant Robredo had to ride a habal-habal (motorcycle) and a bangka (boat) to reach a community of fisherfolk.

They were going to hold a seminar to teach locals their rights under the law. They slept inside the fishermen’s boats and moved to nap under coconut trees when the men had to fish early in the morning.

'From 1 percent to vice president'

The national stage offered a different terrain, which explains her initial reluctance to conquer it. But when she decided to go for it, Robredo embraced all its demands and complexities.

“I may be new in politics,” she said. “But I’m not new to public service.”

“Many say to be an empowered woman of our society, we always have to stand up and be heard, that all have to listen to our voice at every opportunity. Many say gender equality is all about being as strong as a man [but] in my life at least, it meant knowing when to let go of the limelight and knowing when to step up."

ONSTAGE. Leni Robredo speaks to supporters after a thanksgiving mass at the Ateneo de Manila University, May 15, 2016. Photo by Martin San Diego/Rappler

On the campaign trail, she made sure to strike the delicate balance between her personal story and her professional track record. While she’s never hesitated to talk about the pain of losing a husband, she also talked about the years she spent as a young lawyer who assisted people and communities from the “laylayan” (fringes of society).

Robredo was up against 5 male, incumbent senators in the vice presidential race. Most of them hailed from entrenched political families.

Rody Duterte: The man, the mayor, the president

There was Senator Alan Peter Cayetano, whose sister and brother are incumbent legislators. Cayetano eventually placed 3rd in the race. Another Bicolano, Senator Francis Escudero, comes from a long line of Sorsogon politicians. He placed 4th in the race.

Robredo’s chief rival, Senator Ferdinand Marcos Jr, is the only son and namesake of the late dictator. Marcos’ mother is a legislator while his older sister is governor of Ilocos Norte. Robredo defeated Marcos by just over 200,000 votes.

“Sa anim na kandidato, pang-anim ako. Kaya po nang nakita ko ang unang survey, sabi ko sa sarili ko, ‘Grabe namang lakas ng loob meron ako (I was 6th in a race of 6. So when I saw the first survey I told myself, ‘Wow, I can’t believe my own audacity),” Robredo said in one of her campaign sorties.

She went to as many towns as she could cover. The hard work paid off as she managed to land in a tie with Marcos in the last pre-election survey.

At the final campaign rally of the LP in Quezon City, a beaming Robredo told the crowd: “Handa na akong maging nanay ng ating inang bayan (I’m ready to be the mother of our motherland)." – Rappler.com