May 31, 2016 6:02 PM PHT
Rappler.com
Facebook Twitter Copy URL
Copied
'The Courts are not empowered to substitute their judgment for that of the Executive Branch or the Ombudsman on this matter except only where the Ombudsman acts without jurisdiction or with grave abuse of discretion, neither of which is present in this case,' the SC says 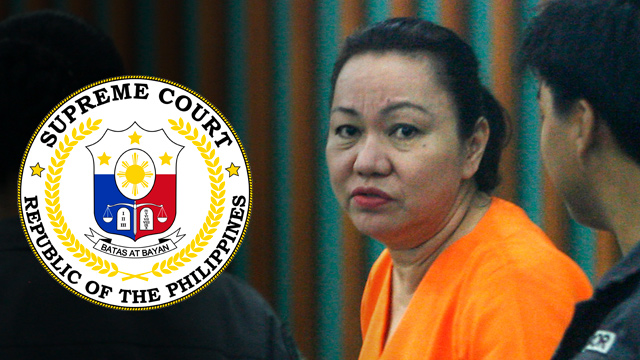 MANILA, Philippines – The Supreme Court (SC) has junked 3 petitions filed by alleged pork barrel scam mastermind Janet Lim Napoles against the Office of the Ombudsman on Tuesday, May 31.

Napoles earlier filed petitions before the High Court to counter the Ombudsman’s finding of probable cause to indict her for her role in the scam, which involved conniving with lawmakers to use their Priority Development Assistance Fund (PDAF) for ghost projects “implemented” by bogus nongovernmental organizations.

Napoles had claimed that the anti-graft agency “committed grave abuse of discretion” for charging her without sufficient evidence to prove her involvement in the alleged conspiracy. She also contested the Ombudsman’s use of Republic Act 3019 or the Anti-Graft and Corrupt Practices Act as basis for charging her when she is not a public official.

“The Court disagreed with all of petitioner’s arguments. It stated, as a matter of general principle, that it would not interfere with the prosecutor’s or Ombudsman’s determination of the existence of probable cause,” SC Spokesperson Theodore Te said in a news briefing.

“The Courts are not empowered to substitute their judgment for that of the Executive Branch or the Ombudsman on this matter except only where the Ombudsman acts without jurisdiction or with grave abuse of discretion, neither of which is present in this case,” Te added.

He also said that private persons may also be charged under RA 3019 if they acted in conspiracy with public officials.

The High Court, in a minute resolution, also dismissed Napoles’ appeals to the Ombudsman’s resolution dated June 22, 2015, and order dated February 16, 2016, that found probable cause to indict Napoles with “3 counts of violation of Section 3(e) of RA 3019, 3 counts of Malversation of Public Funds” and two counts of “corruption of public officials.”

“The power to determine whether a complaint is sufficient in form and substance is lodged with the Ombudsman, who may continue with the inquiry or dismiss it outright,” Te said.

He stressed that it is in the High Court’s policy to prevent interference with the “Ombudsman’s exercise of its investigatory and prosecutory  powers.”

Meanwhile, the SC ordered respondents Ombudsman Conchita Carpio Morales and the anti-graft court Sandiganbayan to comment on Napoles’ petition for certoriari that involved the June 2015 resolution and the February  2016 order. – Rappler.com