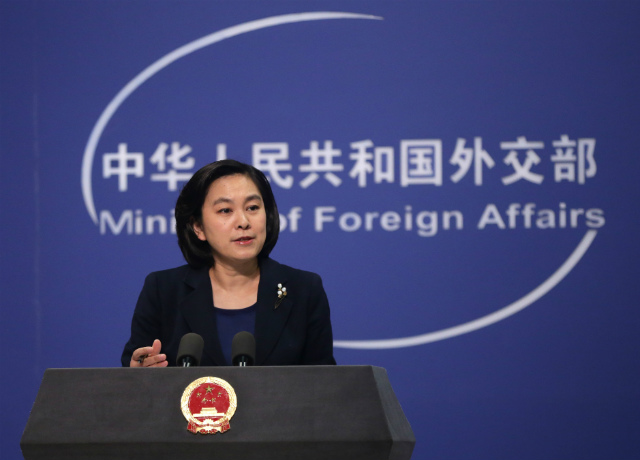 MANILA, Philippines (UPDATED) – China on Wednesday, June 1, urged the Philippines’ incoming Duterte administration to “return to dialogue” to resolve the dispute between Manila and Beijing over the West Philippine Sea (South China Sea).

“We hope the Philippines’ new government can honor their commitments and return to dialogue with China to properly handle the disputes so as to contribute to the healthy and stable development of bilateral relations,” Chinese Foreign Ministry spokesperson Hua Chunying said.

Hua was reacting to the comment by incoming Philippine Foreign Secretary Perfecto Yasay Jr supporting bilateral or one-on-one talks between the Philippines and China.

“I don’t think that there is another way of resolving this dispute except talking to each other,” Yasay told reporters, according to GMA News.

In addition, Chinese Foreign Minister Wang Yi said he welcomes a possible warming of relations with the Philippines.

Speaking during a visit to Canada, he told a news conference in Ottawa that “the door of dialogue between China and the Philippines is always open.”

“If the Philippines sincerely wants to come back to the track of dialogue and negotiations, we welcome that,” he said.

“China and the Philippines properly handling disputes through direct dialogue and consultations is helpful for breaking a deadlock in the bilateral relations in recent years,” he added.

Chinese President Xi Jinping earlier congratulated Davao City Mayor Rodrigo Duterte for winning the Philippine presidency. Xi said he hopes the Philippines and China would “get bilateral relations back on the track of sound development.”

Duterte, for his part, described Xi as a “great president.”

Under President Benigno Aquino III, the Philippines stopped bilateral talks with China on the West Philippine Sea dispute, preferring instead to bring China to court.

China, on the other hand, has rejected the Philippines’ historic arbitration case, as the Asian giant views it as an unfriendly means to resolve the sea dispute.

The Philippine president-elect said he is open to bilateral talks with China.

At the same time, Duterte said China has to follow any ruling handed down by the arbitral tribunal hearing the case over the West Philippine Sea. – With a report from Agence France-Presse / Rappler.com