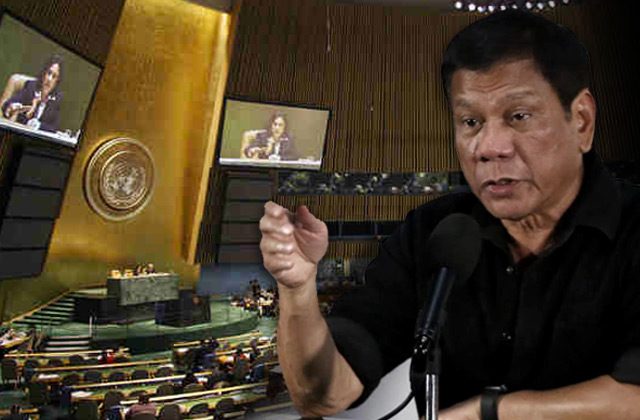 MANILA, Philippines – After calling Pope Francis a son of a bitch, Philippine President-elect Rodrigo Duterte cursed the United Nations (UN) for failing to solve the conflict in the Middle East and not helping the “black people” in Africa.

Duterte made this statement after a reporter asked him late Thursday evening, June 2, about his incendiary comments being picked up by international news groups.

In this context, the reporter – GMA-7’s Mariz Umali, whom he catcalled two days earlier – said there is also a call “to file a suit” against Duterte.

Umali asked, “What is your reaction to this, Sir?”

Duterte replied, “Bullshit to them.”

“They’re killing people. You cannot even lift a finger in Africa. They’re butchering the black people there,” he added.

Founded in 1945, the UN is an international organization composed of 193 member states. The UN aims “to be a center for harmonizing the actions of nations” in achieving peace and security, ensuring friendly relations, and solving global problems.

One of the UN’s agencies, the UN High Commissioner for Refugees, was one of the first to come to the Philippines’ aid when Super Typhoon Yolanda (Haiyan) struck in November 2013.

“Do not force on me your code of conduct. You’re not supposed to do that. I never signed anything which says that I have to behave in this manner or in that manner,” Duterte said.

In November 2015, when he was still running for president, Duterte also cursed Pope Francis for causing traffic when he visited the Philippines in January that same year.

The Pope is the leader of the Catholic Church, the religious group of 1.2 billion people around the world, including 8 out of 10 Filipinos.

For cursing Francis, the Catholic Bishops’ Conference of the Philippines slammed Duterte in December 2015.