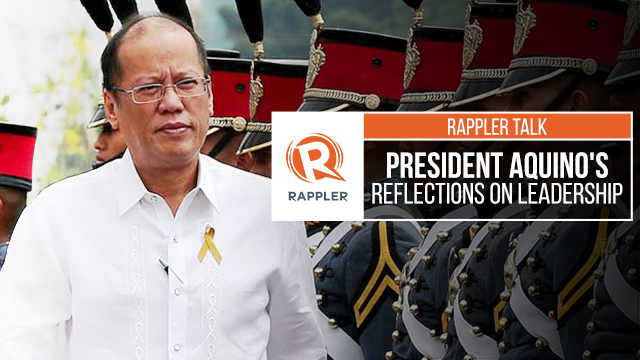 MANILA, Philippines – He was a reluctant presidential candidate, thrown into the toughest political race in 2010 by an electorate sick of corruption in government.

Over 15 million voters elected Benigno Aquino III as president because of his Daang Matuwid (Straight Path) platform. He promised an administration that would stamp out corruption, ensure transparency in governance, and pull more Filipinos out of poverty through an inclusive economic development.

It was a presidency marked by record-high public approval ratings until Aquino’s biggest challenge – the botched Mamasapano encounter that killed 44 elite cops. Then came urban woes like traffic and the long queues at the glitch-ridden MRT3, gut issues magnified in the heat of the election campaign that pushed another candidate – also promising change – past the administration’s anointed one.

Less than a month before he steps down, Aquino spoke to Rappler’s Maria Ressa on his legacy, his greatest challenges, and his hopes for the next leadership. Watch it here on Rappler. – Rappler.com