My ‘friendship stops when PH’s interest is at stake’ – Aquino 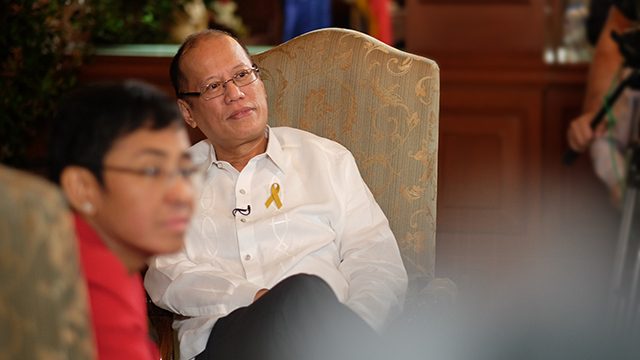 MANILA, Philippines – Amid criticism, outgoing President Benigno Aquino III said he does not prioritize friendship over the country’s welfare and interests.

In an interview with Rappler, Aquino was asked how he views criticism that one of his weaknesses as a leader is his loyalty to his friends.

“Friendship stops when the country’s interest is at stake,” the President responded.

Earlier in Aquino’s term, critics referred to his appointees as “KKK” or “Kaibigan, Kaklase, at Kabarilan.” It even became a subject of a resolution or a topic of possible investigation in the House of Representatives.

In one of his last interviews before he steps down on June 30, Aquino again defended Department of Transportation and Communications Secretary Joseph Emilio Abaya, who has been widely criticized for the state of Metro Manila’s public transportation systems, including the Metro Rail Transit (MRT) and the Light Rail Transit (LRT).

Abaya has also drawn flak for problems in the Land Transportation Office (LTO) and the transportation regulatory board, and the bullet-planting racket at the international airports.

But for Aquino, Abaya is not corrupt – the main reason the President continues to keep and trust him amid allegations of his party mate’s inefficiency. (READ: Transportation chief Abaya stays)

“When you’re talking about corruption, we talk about [the Bureau of] Customs. Not too many people seem to realize that because of all of the jargons, technicalities involved in the DOTC, it’s the easiest hub,” Aquino said.

“Number 1, he is not corrupt, which is the fundamental [reason]. Number 2, he had training in the related fields. Number 3, he was chair of appro (appropriations committee) in the House [of Representatives],” he added.

Aquino reiterated that the dilapidated MRT trains are not Abaya’s fault. He explained that the previous administration failed to conduct scheduled maintenance on the coaches in 2008.

“Anything made by an imperfect being like man, by definition, is imperfect and can be improved. Everybody who keeps saying opinions hopefully will also go back to what are the conditions emanating from it,” he said.

Aquino recounted other friends he appointed in government that he had to let go, such as former Interior and Local Government Undersecretary Rico Puno and LTO chief Virginia Torres.

“I remember so many people that I’ve had relationship with. Si Rico Puno, for instance, he wasn’t performing to the level that I felt he should be doing. Certain attitudes on issues. Somebody unfortunate I had to let go was Virgie Torres of LTO, who has since passed on,” Aquino said.

A former gun-and-ammunition supplier, Puno was embroiled in the scuttled P408-million firearms deal of the Philippine National Police.

The PNP declared a failure of bidding in August 2012 for the procurement of 1,500 units of M4 assault rifles worth P178 million.

The late Torres, reportedly a shooting buddy of the President, allegedly attempted to negotiate an illegal deal involving P100 million worth of smuggled sugar with the Bureau of Customs.

Torres allegedly dropped Aquino’s name during her visit to the BOC and said the sale from the smuggled sugar would be used for the 2016 elections. (READ: Aquino on ex-LTO chief Torres: I can’t be friends with someone who ‘uses’ me)

Aside from the 3, another friend of the President involved in controversy is former PNP chief Alan Purisima. He was a subject of an Ombudsman investigation into an anomalous gun supply contract, which led to his suspension. Purisima, while under suspension, was still allowed by the President to be involved in the botched Mamasapano operation that killed dozens of elite cops and civilians. – Rappler.com