Jun 10, 2016 5:28 PM PHT
Bea Cupin
Facebook Twitter Copy URL
Copied
The Vice President-elect brushes off speculation that her party's failure to submit its SOCE on time will prevent her from assuming the second-highest elective post in the land 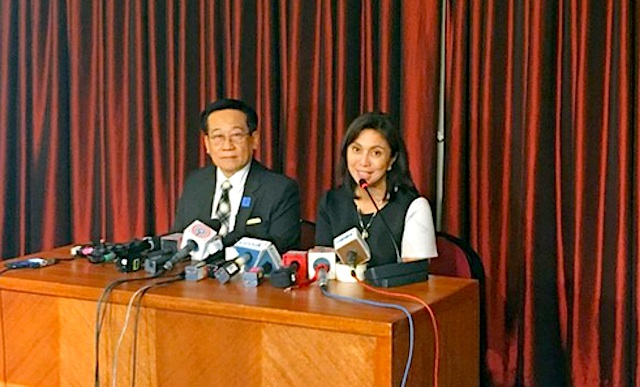 MANILA, Philippines – Vice President-elect Leni Robredo doesn’t seem bothered at all by any hiccups preceding the start of her term, even if her party and 2016 standard-bearer failed to submit the required post-election documents on time.

“I’m sure naman na iyong partido ay mag-susubmit (I’m sure the party will submit) before June 30,” said Robredo in a chance interview with reporters in Leyte on Friday, June 10.

Robredo was asked about the failure of the Liberal Party (LP) to meet the June 8 deadline in submitting its Statement on Campaign Expenses (SOCE). The party’s losing standard-bearer Manuel Roxas II also failed to submit the document on time.

LP asked for a two-week extension from the Commission on Elections.

Robredo’s counsel for the canvassing of votes, Romulo Macalintal, said as much in a statement released on Friday.

“With or without the filing of the statement of contributions and expenditures of the Liberal Party which nominated VP-elect Leni Robredo, the latter can still assume the office of the Vice President since she had already filed her own SOCE,” said Macalintal.

The lawyer added, “The will of the people cannot be set aside on mere misdoing or omission of the political party, which nominated a winning candidate.”

Macalintal argued that the section of the Republic Act 7166, which says a political party’s failure to file a SOCE could affect a winning candidate, was “of doubtful constitutionality.”

“In a word, their right to assume the offices for which they were elected is not dependent on whether their parties had filed the parties’ SOCE but should be reckoned from the candidates’ having filed their own individual SOCE,” he added.

Robredo filed her SOCE on time. She is the top spender among the vice presidential candidates.

Responding to questions, the outgoing Camarines Sur representative downplayed worries that she would have a debt to pay in exchange for campaigndonations.

Robredo is set to take her oath of office on June 30. – Rappler.com