MANILA, Philippines – Around 24 to 25 million Filipino students are expected to head back to school on Monday, June 13, as classes begin for school year 2016 to 2017.

The first day of classes in 2016 also marks the full implementation of the controversial K to 12’s senior high school program. About 1.5 million students will enter Grade 11 in 11,029 public and private senior high schools nationwide.

Even if private and public higher education institutions (HEIs) are also offering senior high school, 11,029 schools is still much less than the total number of secondary schools in the country: 12,878, based on 2013 figures, with a breakdown of 7,748 public schools and 5,130 private schools.

Secretary Armin Luistro of the Department of Education (DepEd) admitted they are not 100% ready for the opening of the senior high school program, but noted that at least 50% of the job is already done.

DepEd Assistant Secretary Elvin Uy said the department is “as ready as we can be for this point in time” since “all the essential components” are there: schools, facilities, teachers, and instructional materials.

“Will it be perfect? Absolutely not. Will we have problems especially during the first few weeks? I think we will, only because it’s a new system. But we’re confident with the preparations that we’ve done for the past 3 years since the law was passed,” he told Rappler in an interview.

There are 4 tracks under senior high school: academic, technical-vocational-livelihood (TVL), arts and design, and sports.

Data from DepEd’s early registration showed majority or 774,000 of the 1.31 million early registrants want to take the academic track, while 531,000 prefer the TVL track. The rest said they will pursue either the arts and design track, or the sports track.

“Not all schools will be able to offer 4 tracks, kaya nga nag-planning tayo sino ang mag-offer ng alin (which is why we planned which schools will offer what track),” DepEd Assistant Secretary Jesus Mateo told Rappler in an interview.

During the planning stages, DepEd first identified the students’ preferred track, and the capacity of existing high schools – whether private or public – to offer the tracks preferred by students.

What if the students’ preferred track or strand is only available in non-DepEd schools near them?

The senior high school voucher program is available for 3 groups of students:

The program’s budget of P12 billion translates to 708,000 students in total, Uy explained. 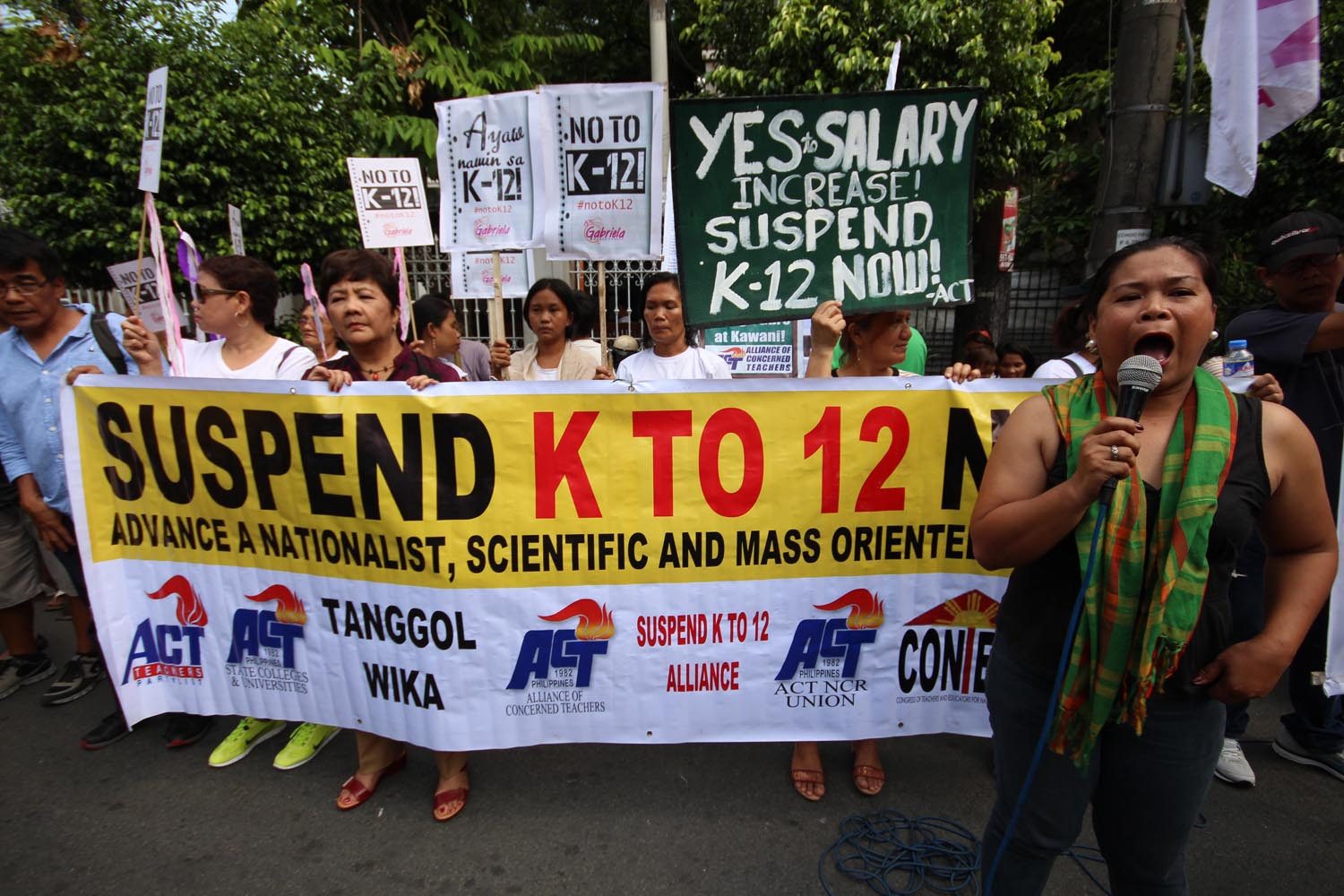 Since millions of supposedly high school graduates are heading to Grade 11 instead, colleges and universities will have low enrollment in 2016 and 2017, all the way to school year 2021-2022 when things are expected to normalize.

Based on Commission on Higher Education estimates, about 13,634 teaching staff and 11,456 non-teaching staff may be displaced because of the effect of senior high school on higher education.

Displaced college workers will be DepEd’s priority as it hires 36,000 teachers for this school year. The salary of these new teacher items range from P19,000 to P36,000.

In 3 regions where there is a concentration of HEIs, DepEd has already hired a total of 1,251 college workers:

The labor woes of college workers are among the many reasons cited by petitioners in seeking for the suspension of the K to 12 program before the Supreme Court (SC).

The SC has yet to render its final decision, but it already dismissed the petitioners’ pleas for a temporary restraining order, and the conduct of oral arguments.

Uy said a positive decision would give the K to 12 program and senior high school “a very strong affirmation from all 3 branches of government.”

“Worst case scenario for us: if they say no, we would have more classrooms, [and] the biggest impact would be on teachers and learning materials. So we would have developed and procured materials that are unuseful, and we would have hired teachers who would have no one to teach, and that would be a problem from a labor standpoint,” Uy added.

The nationwide rollout of Grade 11 coincides with the transition period of President-elect Rodrigo Duterte’s administration. He has already thrown his support for the K to 12 program despite the challenges. – Rappler.com