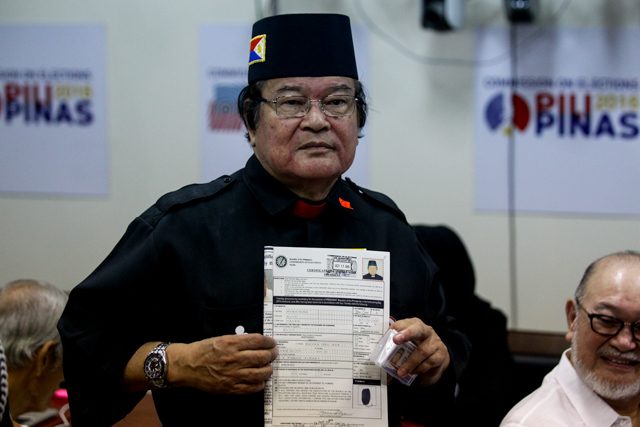 Facebook Twitter Copy URL
Copied
This comes after a judge, whom Elly Pamatong called 'corrupt,' sought to disbar the lawyer known as a habitual nuisance bet

MANILA, Philippines – The Supreme Court (SC) on Tuesday, June 14, announced that it has suspended Elly Pamatong as a lawyer after he called a judge “corrupt” and “a disgrace” to the justice system.

In a media briefing, the SC Public Information Office (PIO) said the High Court ruled to “suspend Atty Elly L Pamatong from the practice of law for two (2) years effective upon the finality of this resolution.”

“We sternly warn the respondent that a repetition of the same or similar infraction shall merit a more severe sanction,” the SC said.

Pantanosas wanted Pamatong disbarred because the lawyer accused him of being corrupt.

In a motion seeking to inhibit Pantanosas from a case, Pamatong said: “Finally, in my thirty (30) years of law practice, I never encountered a judge who appears to be as corrupt as you are, thereby giving me the impression that you are a disgrace to the judicial system of this land who does not deserved (sic) to be a member of the Philippine Bar at all.”

Pamatong filed the motion after a courtroom incident involving Pantanosas.

The SC said this “involved a civil case being heard in the court of petitioner Judge where respondent Pamatong was appearing as counsel.”

The SC PIO explained: “During one hearing, petitioner Judge had supposedly asked respondent to remove his copia (headwear worn by Muslims) while inside the courtroom, to which respondent demurred citing religious grounds and embarrassment because of his ‘bald pate.’ Petitioner Judge obliged but with the warning that he would no longer allow it the next time.”

Pamatong is a prominent lawyer who had been declared a nuisance candidate in previous elections.

In January, Pamatong also lost in the SC after the High Court upheld a Comelec decision declaring him a nuisance bet. – Paterno Esmaquel II/Rappler.com