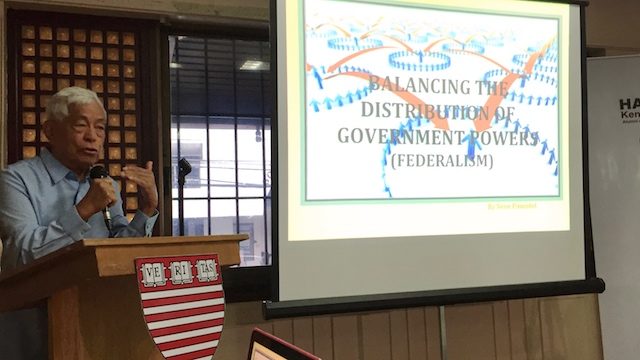 MANILA, Philippines – In his proposal for a federal Republic of the Philippines, former Senate President Aquilino Pimentel Jr is eyeing the creation of 11 federal states, while keeping a presidential form of government and increasing the number of elected senators.

In a talk organized by the Harvard Kennedy School alumni at Club Filipino in San Juan City on Friday, June 17, Pimentel outlined his proposal for a federal form of government that would divide the country into autonomous regions with the authority to enforce policies for their own affairs.

Under this setup, the central government will retain powers to deal with issues of national interest, like foreign policy and national security. (READ: Will federalism address PH woes? Pros and cons of making the shift)

Pimentel is proposing the creation of 11 federal states that would be created out of the existing administrative regions, so that the identities of the proposed states would already be known by the people.

Metro Manila, meanwhile, will be the capital of the federal republic of the Philippines.

Pimentel stressed that the Bangsamoro federal state would be important to maintain peace in the troubled southern area in Mindanao, adding that this would mean that the proposed Bangsamoro Basic Law (BBL) would no longer be needed.

“BBL intends to seek peace, but you cannot seek peace without considering the provisions of the Constitution. Because even if the intention is good but it is contrary to the Constitution, how can you justify such a proposal?” he said.

He added, “We’re trying to address the issue that their culture and tradition [are respected].”

Pimentel also suggested retaining the current presidential form, but proposed that the president and vice president should be elected as a tandem instead of being voted separately.

A bicameral Congress will also be retained, but the federal state senators will be elected by the states themselves. Pimentel said that the advantage in this setup is that citizens would be in a better position to know the candidates running for the Senate.

He pointed out that the newly-elected senators in last month’s elections mostly came from Luzon.

In his proposed setup, Pimentel suggested increasing the number of senators. Each of the 11 federal states would be represented by 6 senators, with 6 more coming from Metro Manila and 9 overseas senators, for a total of 81 senators.

Justifying the increase, Pimentel pointed out that the 24-senator limit was based on a Philippine population of 20 million, while current statistics peg the figure at more than 100 million.

The former Senate president also suggested adding Sabah as part of the Philippines’ territory and converting it into another federal state.

The Sultan of Sulu once ruled over Sabah, but leased northern Borneo to Europeans in the 1870s.

Its heirs have received lease payments for Sabah, even as the state became part of the federation of Malaysia in 1963.

It was also the site of a 2013 standoff between Malaysian security forces and about 200 followers of a Philippine sultan seeking to reclaim the state.

Pimentel also said that the territory of the federal republic should include Scarborough Shoal and the Kalayaan Group of Islands in the disputed West Philippine Sea (South China Sea). – Rappler.com