Facebook Twitter Copy URL
Copied
'We were about to give up,' American national Candace Piercy says after getting a photo with Philippine President-elect Rodrigo Duterte past 1 am on Saturday

DAVAO CITY, Philippines – For more than an hour, American couple Stephen and Candace Piercy patiently sat outside a hotel restaurant in Davao City late Friday evening, June 17, to get a most unforgettable souvenir from the Philippines.

Like dozens of others who flocked to Hotel Elena that night, the Piercy couple wanted a photo with Philippine President-elect Rodrigo Duterte.

Stephen was clutching a camera all the while. He and Candace were seated a few steps away from the entrance of Jacky’s Resto Cafe, facing a closed door with the sign, “Exclusive Function.”

Asked why they wanted a photo with Duterte, Candace told Rappler, “We would just like to have a souvenir to show our family and friends.”

“We do have some Filipino friends in the US,” she added.

Stephen and Candace Piercy waited for more than 1 hour for a photo with Duterte in Davao last night @rapplerdotcom pic.twitter.com/zSNDcyflHf

The couple, however, didn’t have any appointment with Duterte, who has been receiving guests such as foreign ambassadors in Davao City. Neither did they know anyone from the Duterte camp. They just happened to see Duterte in their hotel, and thought of having their photo taken.

It was almost impossible, given the tight security, until reporters saw the couple at around 12:40 am on Saturday, June 18, and asked them why they had been waiting. At that time, we ourselves had been staking out for a possible interview with Duterte, even as the president-elect himself said he will “boycott” the media because he is supposedly often misinterpreted.

When we learned that they wanted a photo with Duterte, we told Duterte aide Christopher “Bong” Go about it as he was ushering in other guests.

Go said he will ask Duterte’s permission, but added that he would first have to accommodate another group.

He said this group of around 4 Duterte supporters, all wearing red, had been waiting for 4 days for an audience with Duterte.

One of the Duterte supporters who flocked to Hotel Elena, Davao City, for a photo with Duterte @rapplerdotcom pic.twitter.com/zZ4G0Hgrol

Ten minutes later, Go came out of the restaurant looking for the couple.

‘We were about to give up’

“I think they’re looking for you,” I told Candace at around 1:10 am on Saturday.

The couple then proceeded to the door. Go ushered them in as Duterte was waiting.

Stephen and Candace Piercy got their wish: a photo with the rockstar mayor of Davao City who is set to become Philippine president on June 30. 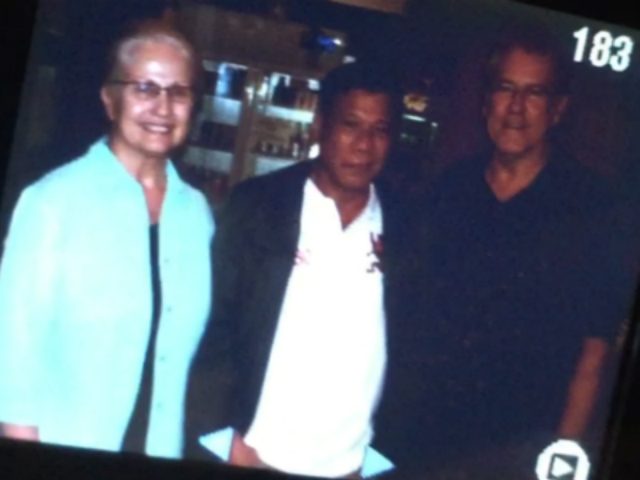 Asked how the experience was, Stephen told Rappler in jest: “Wonderful! I’ll never be the same again.”

“It was fun. It totally was an honor to have a picture taken with him,” Candace said. “We were about to give up. It was way past our bedtime.”

Stephen added, “We endured to the end.” – Rappler.com