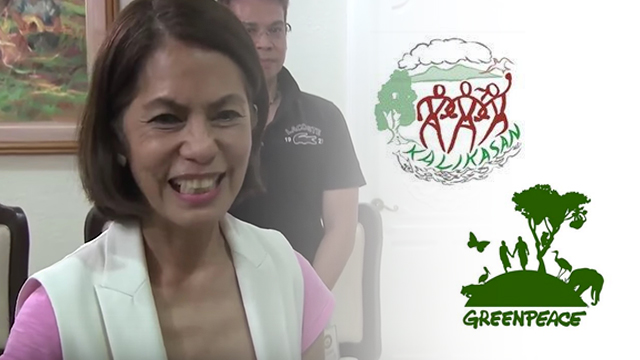 Lopez is the “right choice” for the post, according to Coalition of Clean Air Advocates of the Philippines (CCAAP) chair Leo Olarte.

The Kalikasan People’s Network for the Environment said she “has a proven track record in defending ecological integrity and community rights against big mining corporations.”

A video released to the media on Monday night, June 20, showed Duterte offering the Department of Environment and Natural Resources (DENR) post to Lopez. Duterte previously promised the Leftist movement that he would choose his environment secretary from their list of nominees.

Both Kalikasan and CCAAP urged her to accept the post.

“We wish Ms. Lopez to be the spark that will stop the reign of corporate mining, coal power, and other vested big business interests in the DENR,” Kalikasan said in a statement.

“Her resolve, experience and stand for the environment will be an important contribution to the incoming Duterte government’s shaping of a regime that will diverge from the anti-people, anti-environment pathway of the past Aquino administration,” it added.

CCAAP’s Olarte also urged Lopez to move from the private sector to the DENR, which, he said, needs her “talent and clean heart.”

But Vince Cinches, the Oceans Campaigner for Greenpeace Philippines, said Lopez should go beyond her advocacy against mining.

“Especially [since] the Philippines is at the center of environmental adversity, perhaps her anti-mining engagement is a good platform [from which] to look at other environmental issues within the framework of precaution and sustainability,” he said.

While he acknowledged that Lopez “deserves a chance” and “can usher something new,” he still urged her to consider inputs from experts within Green Thumb Coalition.

He also believes Lopez should give due importance to allowing the country’s oceans to recover from destruction.

Cinches said it’s also prudent for Lopez to make a strong statement rejecting “environmentally-destructive” projects her own family is pushing for, which includes the clearing of forests in Mount Talinis by the Lopez-led Energy Development Corporation.

Kalikasan also urged Lopez to encourage her family to be an example to other industrialists in protecting forests and the country’s important ecosystems, and in respecting the rights and decision making of communities at the grassroots.

In a statement sent to Rappler on Thursday, June 23, EDC said its proposed 60-megawatt geothermal expansion project in Valencia, Negros Oriental is outside Mount Talinis.

Lopez is known to vehemently oppose mining activities and coal-fired powerplants, and has campaigned against coal mining in Semirara Island, Antique. She also spearheaded her foundation’s efforts to clean up the Pasig River and has supported eco-tourism efforts in various parts of the country.

Kalikasan on Monday said it witnessed how Lopez defended the environment through the “No to Mining in Palawan” national signature drive that gathered 10 million signatures.

Lopez also joined protests in Batangas and dialogued with local government officials in opposing foreign mining company MRL Gold. Kalikasan said these efforts led to the halt of “the threat of mining plunder and pollution to the biodiversity-rich Mount Lobo and its adjacent Verde Island Passage.”

Lopez was also among those who demanded justice for the death of Palawan environmentalist Dr Gerry Ortega, Kalikasan noted.

Meanwhile, Olarte hailed Lopez as an advocate who consistently promoted clean and renewable energy in the country. – Rappler.com