Duterte to United States: Are you with us or not with us? 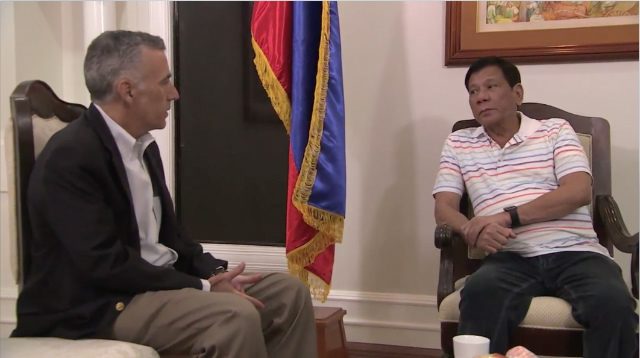 President-elect Rodrigo Duterte voiced out this concern during a business forum on Tuesday, June 21, in Davao City.

He revealed that he has asked this question to US Ambassador Philip Goldberg.

“Because I told Goldberg, ‘Are you with us or are you not with us? Because if I may decide based on the [international court’s] judgment, I will now start to claim there,” said Duterte.

The Mutual Defense Treaty, signed by the Philippine and US government in 1952, declares the two parties’ “common determination to defend themselves against external armed attack.”

Duterte wondered how the decision to come to each others’ aid would be made if the definition of an “external armed attack” is contentious.

“I’ll give you an example. The law of the sea of nations [United Nations Convention on the Law of the Sea] gives us the exclusive right over 200 [nautical miles]. If I go there using that privilege of mine, would that be an attack against China or an offense against China?” he said.

Would the US help protect Philippine territory if China retaliates? China has implied that it would not recognize any decision by the international tribunal.

Duterte has said he is open to pursuing bilateral talks with China if there is no development with the arbitration case for 2 or 3 years. China has said it prefers such a move. The US and Japan, two important players in the maritime dispute, do not, preferring multilateral talks.

Duterte is waiting for the international tribunal to decide on the Philippines’ case.

“I’ve repeatedly said we will await for the arbitral judgement. Then I will decide,” he said. – Rappler.com