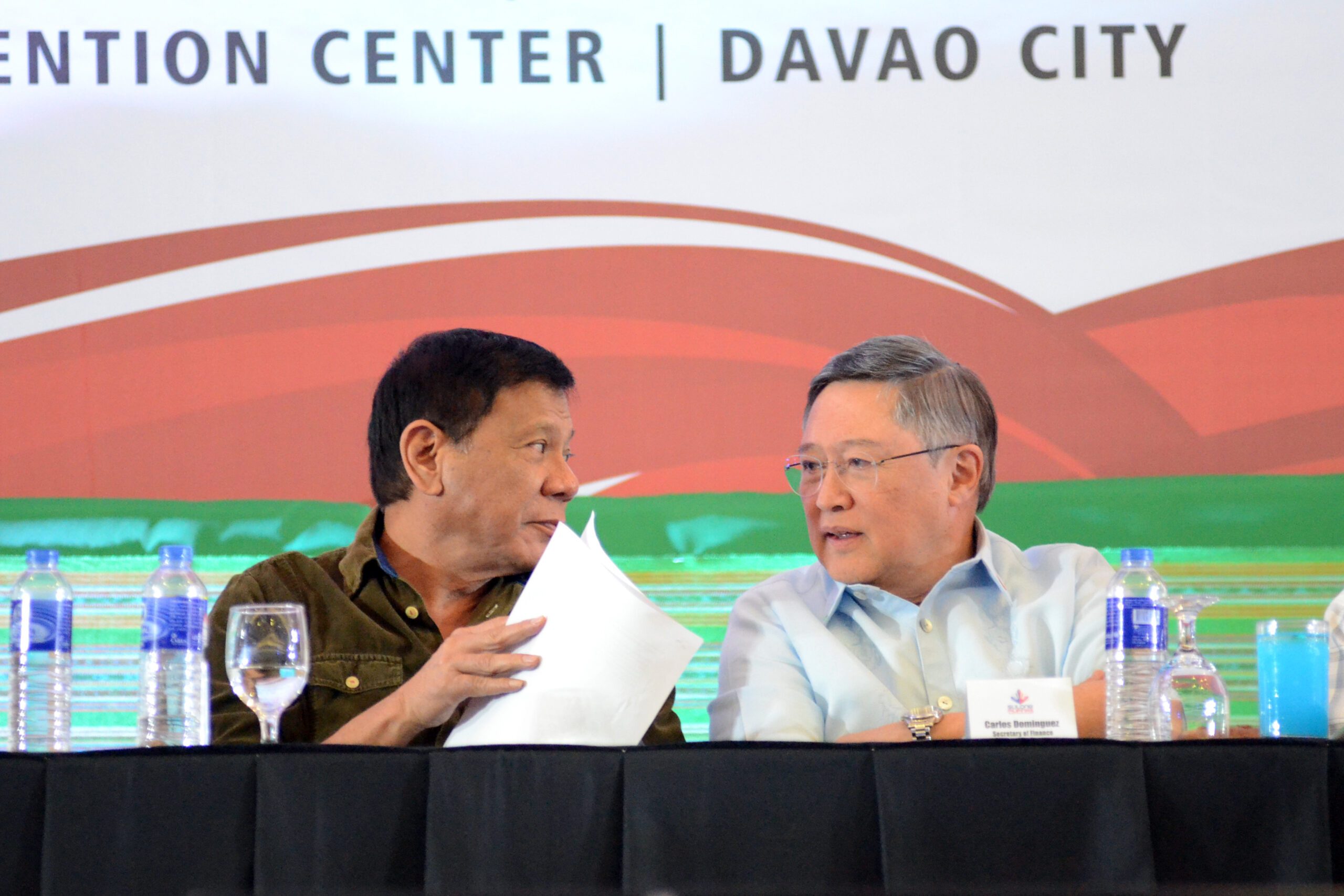 DAVAO CITY, Philippines –  “It’s all doable. It’s just a matter of doing it.”

This was President-elect Rodrigo Duterte response to a 10-point wishlist presented to him by businessmen on Tuesday, June 21.

“Sulong Pilipinas,” a two-day forum held in Davao City, gathered some 450 businessmen who came up with recommendations for the incoming Duterte administration on how to improve the country’s economy and business environment.

The recommendations include improving the country’s transportation network, reduction of corporate and personal income tax, a national ID system, and improving Internet connection all over the country.

“We know you are deluged by suggestions. But the recommendations today represent the best thinking from the business community all over the country,” Dominguez said.

The forum was aided by the presence of 13 incoming Cabinet members who faced businessmen in a candid question-and-answer portion before Duterte’s arrival on the second day of the event.

Duterte received a copy of the wishlist in advance. Addressing the businessmen, he said he would “consider” the suggestions.

One of the more controversial recommendations is the “review of the Conditional Cash Transfer program,” which Duterte had repeatedly promised to continue and even expand during the campaign.

But forum participants criticized the program for promoting “dependency on government.”

A better government initiative, they said, would be the enhancement of “social protection initiatives through skills development, cash for work, livelihood projects, among others.”

On the recommendation to promoting responsible mining, Duterte said he could not completely prohibit mining because there are laws that allow and regulate it.

He would, however, strictly implement regulations to ensure mining does not destroy the environment.

Duterte reiterated his promise to fight corruption, a problem that continues to threaten investments in the country.

“Corruption must stop now. I will address to all Filipinos who want to do something for their country and never had the opportunity. I really don’t like corruption, it makes me sick,” he said.

The 10 recommendations of the forum participants appear in order of importance below, as written by forum leaders.

As their topmost concern, participants recommended a comprehensive tax reform package including the reduction of corporate and personal income taxes and lower capital gains tax rates patterned after the taxation systems of Singapore and Hong Kong. To compensate for the deficit resulting from reduced tax rates, the suggestion is to increase excise taxes by expanding the definition of luxury goods.

Past administrations attempted to institute a nationwide identification system but lacked the political will. Participants agreed there is a pressing need for such an ID system that will allow government agencies to provide more targeted social services and prevent double-counting or leakage. The system is expected to improve access health, education, food, shelter, and conditional cash transfer programs, aside from enhancing peace and order.

3. Automation and streamlined process of permits and licenses at the local and national level

Automation and streamlining of processes at the local and national levels were recommended to reduce processing time for permits and bottlenecks in land titling. Other suggestions to cut red tape include the expansion of the “single window” concept, extension of validity for various licenses, and use of “negative confirmation” for government approvals. Amending the  telecommunication law or Republic Act 7925 should be prioritized, along with the passage of a law to regulate wireless/mobile internet services to make the Philippines competitive with its ASEAN neighbors. To ensure enhanced connectivity, workshop participants recommended the creation of Internet cooperatives in far-flung areas similar to existing electric coops.

5. Delivery of support services to farmers and fishermen

Delegates proposed the adoption of value-chain development in rural-based enterprises, including agriculture and mariculture. Recognizing the vast untapped potential of the agri-sector, they recommended a support system through financing, technology, and logistics to raise rural productivity and employment.

6. Responsible mining with local value-added such as processing and limiting raw ore exports

Businessmen want the next administration to limit and gradually eliminate the export of mineral ore. Instead, they recommended a shift to value-added processing that would facilitate a strong domestic mineral products industry.

There is a need for a national strategy to determine sectors where the country has the greatest competitive advantage and optimize the value of land, people, and other resources. Delegates suggested an action plan to identify industry clusters and regions where SMEs should locate to avail of lower transport, energy, and logistics costs.

8. Improve transport networks across the country

A clamor to fast-track infrastructure projects nationwide resonated among the participants. Priority should be the development of regional airports, seaports, and mass transit projects such as the North-South Railway, C-6 Expressway, Cebu Bus Rapid Transit, and Davao port projects.

Perceived as a program that promotes dependency on government, the CCT must be reviewed to allow for long-term intervention that teaches the poor to catch fish rather than receive dole-outs. Participants suggested enhancing social protection initiatives through skills development, cash for work, livelihood projects, among others.

10. Reduce bottlenecks in the implementation of Public-Private Partnership and infra projects and respect the sanctity of contracts

Concrete measures should be made to remove roadblocks preventing speedy implementation of vital infra projects, such as right-of-way issues and lack of synergy between LGUs and national government agencies. Delegates want an assurance from the incoming administration that existing and future contracts will be honored.