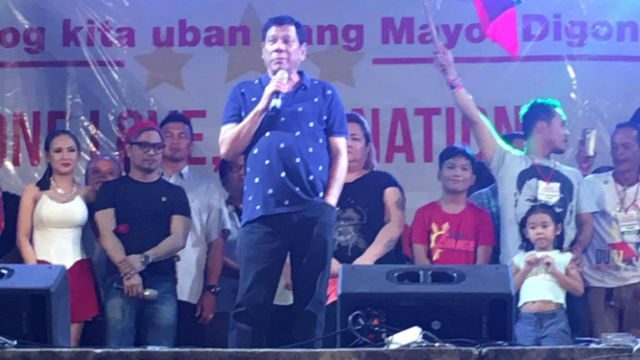 Facebook Twitter Copy URL
Copied
'The Abu Sayyaf is not my enemy. I know it is connected with the issue of Mindanao. That is why I want to ask them: are they willing to talk or do we just fight it out?' Duterte tells supporters in Cebu late Saturday

“The Abu Sayyaf is not my enemy. I know it is connected with the issue of Mindanao,” Duterte told supporters in a speech in the Cebu late Saturday, June 25, referring to the rebellion-torn south of the country.

“That is why I want to ask them: Are they willing to talk or do we just fight it out?” said the firebrand politician, who campaigned on promises to get tough on crime. He assumes office on June 30.

The incoming leader himself hails from Mindanao, where a decades-long Muslim separatist insurgency has claimed more than 100,000 lives.

While previous administrations have opened talks with major Muslim separatist groups in the South, they have deployed troops to hunt down the Abu Sayyaf, known for its kidnap-for-ransom activities targetting mostly foreigners.

The Abu Sayyaf is a loose network of a few hundred Islamic militants formed in the 1990s with seed money from Osama bin Laden’s Al-Qaeda network that has earned millions of dollars from kidnappings-for-ransom.

Although its leaders have pledged allegiance to Islamic State, analysts say they are mainly focused on lucrative kidnappings. Police in Mindanao said that the group is even “outsourcing” its kidnap operations.

Duterte said on Friday that he and his aides were responsible for successfully negotiating the release of one of the group’s hostages, Filipina Marites Flor, who had been kidnapped along with several foreigners in September.

Sulu Governor Abdusakur Tan II had said that Flor was released as an act of “goodwill” by the Abu Sayyaf towards the incoming administration, but there are unconfirmed reports that ransom was paid to the group.

The Abu Sayyaf beheaded two Canadian hostages who were among that group, after the ransom deadline it had set lapsed.

The fourth hostage, a Norwegian, is still being held. Flor had said that she overheard the Abu Sayyaf saying that Kjartan Sekkingstad would be killed if the ransom demand is not met.

Last week, 7 Indonesian seamen were abducted in waters off the southern Philippines, prompting Jakarta to ban any Indonesian-flagged vessel from sailing to the Philippines.

The Philippine military said Sunday it believes the Indonesians are being held in the remote Sulu archipelago, the main Abu Sayyaf stronghold.

The Philippines, Malaysia, and Indonesia have agreed to consider joint measures aimed at curbing the seaborne kidnappings.

These include sea and air patrols over a designated transit corridor where vessels could travel between the countries. – Rappler.com