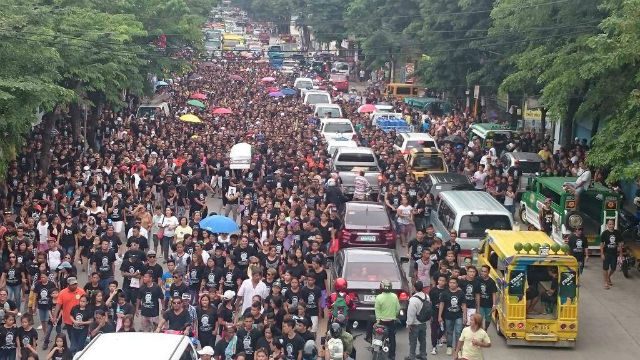 CEBU CITY, Philippines – Central Visayas’ alleged top drug lord was laid to rest in Cebu City on Monday, June 27, with hundreds of supporters, friends, and relatives marching for him to San Nicolas Parish.

After mass, Diaz was buried at a mausoleum at the Calamba Cemetery in this city at around 1 pm.

Before his death, Diaz said he was ready to stop selling drugs and cooperate with police in helping nab other drug suspects.

“His statement that he was retiring was false. Surveillance revealed that he was setting up a new base of operations in Luzon. Cebu exports many things, but we will not export that,” Osmeña said.

Those who attended the funeral wore shirts with Diaz’ face. They bore the print “We will miss you.” A drum and bugle corps also played during the procession.

Diaz is the latest drug suspect to be killed after Osmeña announced a P50,000 reward for police officers who kill drug suspects in the line of duty. This follows President-elect Rodrigo Duterte’s pronouncements that the police and local authorities should adopt an aggressive approach in the war against illegal drugs. – Ryan Macasero/Rappler.com

The photo was used with permission from Sun.Star Cebu/Sun.Star Network Exchange