Duterte takes oath as 16th President of the Philippines

Jun 30, 2016 12:02 PM PHT
Rappler.com
Facebook Twitter Copy URL
Copied
(UPDATED) President Rodrigo Duterte, who won by a landslide in the May elections with 16.6 million votes, is the country’s first Chief Executive from Mindanao 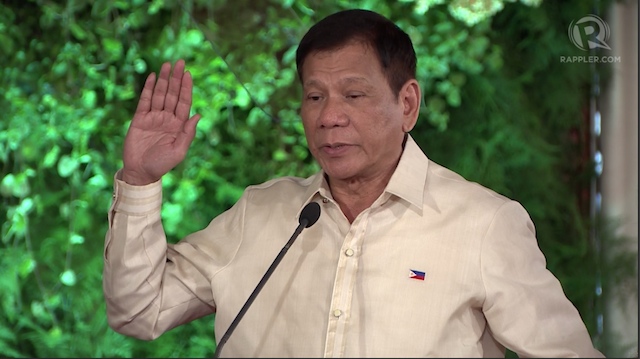 With Duterte as he took his oath at the Palace Rizal Hall were his 4 children – Sara Duterte-Carpio, Paolo, Sebastian, and Kitty.

He signed his oath of office afterwards, surrounded by his children and Reyes.

Duterte, who won by a landslide in the May elections with 16.6 million votes, is the country’s first president from Mindanao. (READ: Rody Duterte: The man, the mayor, the president)

He campaigned with a clear message of “change” and an end to criminality – a campaign hailed by even his predecessor, Benigno Aquino III, as “masterful.”

In his inaugural speech, Duterte reiterated his call for change, the running theme of his campaign. “Change must start with us and in us… We have become our own worst enemies, and we must have the courage and the will to change ourselves.”

Apparently addressing public concerns about a resort to extrajudicial killings, Duterte said, “I know that there are those who do not approve of my methods of fighting criminality… In response, let me say this: I have seen how corruption bled government of funds. I have seen how illegal drugs destroy individuals and ruin families’ relationships…Look at these from that perspective and tell me that I am wrong.”

He further said, “I know the limits of the power and authority of the president. I know what is legal and what is not. My adherence to due process and the rule of law is uncompromising.”

Calling on people to read between the lines, the new president also said, “We have to listen to the murmurings of the people… No leader, however strong, can succeed at anything… unless he has the support and cooperation of the people.” 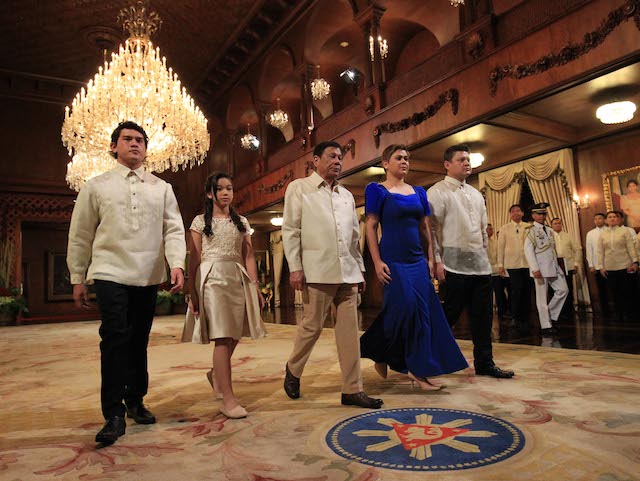 Duterte’s anti-crime program includes plans to reintroduce the death penalty, issuing shoot-to-kill orders to the security services and offering them bounties for the bodies of drug dealers. He has also told ordinary Filipinos to kill suspected criminals.

A lawyer who cut his teeth as long-time mayor of the major southern city of Davao, Duterte, 71, has said another central element of his law-and-order platform is to curb social freedoms with night curfews for children and a ban on alcohol sales after midnight.

The foul-mouthed politician’s style is a sharp departure from that of the laid-back Benigno Aquino III, the outgoing leader of the Southeast Asian nation of about 100 million people.

Duterte won last month’s presidential elections after an inflammatory campaign in which he promised that tens of thousands of criminals would die and that fish in Manila Bay would grow fat on bodies dumped there.

His campaign also relentlessly highlighted the alleged failures of Aquino, who delivered the highest rates of economic growth in decades, but failed to stem worsening traffic gridlock, high crime and the widespread poverty endured by many Filipinos.

Even before his term began, Duterte picked fights with the envoys of key allies the United States and Australia over his joke about raping an Australian missionary who was sexually assaulted and shot dead in a prison riot.

After being elected, his controversial comments that some of the scores of Filipino journalists murdered over the past 30 years had deserved to die earned a rare rebuke from United Nations Secretary-General Ban Ki-moon.

Duterte has been accused of links to vigilante death squads in Davao, which rights groups say have killed more than 1,000 people. Such groups are concerned that extrajudicial killings could spread across the Philippines under Duterte.

With Duterte’s encouragement, police have already killed dozens of suspected criminals since the May 9 election. The incoming mayor of Cebu, the Philippines’ second-biggest city, has also paid out Duterte-style bounties to police for killing drug suspects.

Behind the fireworks of his rhetoric and the war on crime, Duterte has promised a raft of other far-reaching reforms.

Chief among those is to change the centralized government to a federal system in which newly created states would have a large degree of autonomy. Those states would also be able to keep most of their revenues.

But doing so will require rewriting the Constitution.

Duterte has also said he can end decades-old Muslim and communist rebellions, which have claimed tens of thousands of lives. Peace talks with the communists are set to start this month. He expects federalism will appease Muslim rebels, who want autonomy. – with a report from Agence France-Presse/Rappler.com